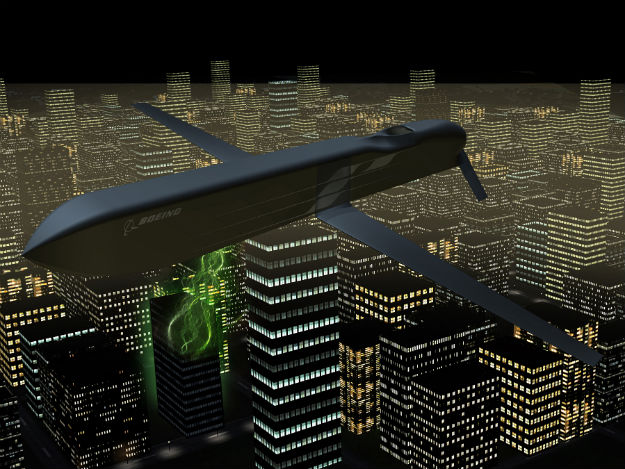 While everyone in Washington is talking about the upcoming presidential debate today, one of the U.S. Air Force’s newest high-tech toys was taking big step — er, flight — forward.

The Counter-electronics High-powered Microwave Advanced Missile Project (CHAMP) is an effort to build a missile that flies over — not into — a target, be it an entire military base, neighborhood, or a even a lone tank and shuts down all the electronics inside without harming a soul. (Think of it almost as a mini-EMP in a rocket.) On Oct. 16, a CHAMP missile flew an hour-long preprogrammed route low over the Utah desert, “degrading and defeating” the electronics inside seven different targets. In a building along the route packed with computers, the screens all went dark as CHAMP sailed by, emitting a blast of high-power microwaves, according to CHAMP-maker Boeing’s Oct. 22 press release announcing the test flight. (The weapon even took out the remotely controlled TV cameras that were monitoring the tests, claimed Boeing.)

As the Chicago-based defense giant says in its press release, “CHAMP, which renders electronic targets useless, is a non-kinetic alternative to traditional explosive weapons that use the energy of motion to defeat a target.” (Side note: “energy of motion” is a nice way of saying that missiles, bombs, and bullets slam into things and explode.)

So, how does CHAMP fit into the Pentagon’s post Iraq and Afghan war plans? As everyone knows, the Defense Department is focusing on how to defeat new generations of air defense radars, surface to air missiles, anti ship missiles, and a host of other technologies that are specifically meant to keep American weapons systems at bay.

This means coming up with a fleet of new stealth bombers, fighters, and drone jets that can penetrate these defenses. It also means creating a bevy of long-range — or standoff weapons — capable of being launched by unstealthy jets far away from heavily defended targets. Where does something like CHAMP come in? As a door kicker. Launched from a stealth aircraft and designed to take out enemy air defense networks and command and control centers, CHAMP would pave the way for less stealthy jets and help to “blind” the enemy.

“In the near future, this technology may be used to render an enemy’s electronic and data systems useless even before the first troops or aircraft arrive,” said Keith Coleman, CHAMP program manager at Boeing’s Phantom Works division, in a press release.

Still, don’t expect to see CHAMP fielded soon. It’s simply meant to demonstrate that such a weapon is feasible. In the meantime, the Pentagon is buying EA-18G Growler electronic attack jets for the Navy while the Air Force and Marine Corps hope to use something called the Next Generation Jammer along with powerful Active Electronically Scanned Array radars (AESA radars can be used to jam other radars, in addition to many other things) on their F-35 Joint Strike Fighters to defeat enemy sensors. And don’t be surprised if the Navy decides to equip its planned fleet of stealthy combat drones, known as UCLASS, with some sort of electronic warfare gear aimed at jamming enemy electronics.

IBM: Mind reading is less than five years away. For real.