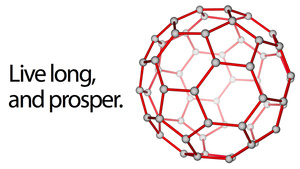 Buckminster fullerene molecules, the naturally occurring spheres made up of 60 carbon atoms, have long been suspected to have biological benefits. Now, a study that set out to establish if they were toxic when administered orally has proven quite the opposite—they almost doubled the lifespan of the rats that they were fed to.

The experiments, which were carried out at the Université Paris Sud, France, set out to assess what adverse reactions might be caused by ingesting Bucky balls orally. To do that, they fed three groups of rats differently. Along with their normal diet, one group was held as a control; a second was fed olive oil; and a third group was fed olive oil doped with a 0.8 mg/ml concentration of Buckminster fullerene.

The results, which appear in Biomaterials, took the researchers by surprise. The control group had a median lifespan of 22 months, and the olive oil group one of 26 months. But the Bucky ball group? They stuck it out for 42 months. That’s almost double the control group.

The researchers have established that the effect is mediated by a reduction in oxidative stress—an imbalance in living cells that contributes to ageing. To say these results are important is an understatement: the desire to live longer runs strong in many of us, and it’s a feat scientists have been hoping to achieve for centuries.

But while it’s a remarkable finding, it’s worth remembering that it’s just a single study. It’s going to take a hell of a lot more work before the scientific community is completely convinced that we should all be splashing Bucky-enriched olive oil on our salads, that’s for sure. [Biomaterialsvia Extreme Longevity]

September 20, 2012 – DCMX Radio: The Infinite YOU – Part VI: Making It Easy To Change Your Beliefs, Using Fear To Your Advantage, Living In The Moment