Calling out the CIA: Secrecy Killings 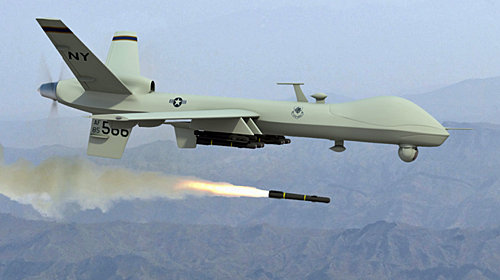 Today Andrew Rosenthal of The New York Times published a thoughtful columndiscussing the untenable position taken by the government in response to the ACLU’s two Freedom of Information Act lawsuits seeking information about the CIA’s targeted killing drone strike program, including its targeting of U.S. citizens. As Rosenthal explains, “the government is blocking any consideration of these petitions with one of the oldest, and most pathetic, dodges in the secrecy game. It says it cannot confirm or deny the existence of any drone strike policy or program.”

Rosenthal goes on to highlight the reasons why the government’s position is untenable:

That would be unacceptable under any condition, but it’s completely ridiculous when you take into account the fact that a) there have been voluminous news accounts of drone strikes, including the one on Mr. Awlaki, and b) pretty much every top government official involved in this issue has talked about the drone strikes in public.

He also highlights the arguments made in the ACLU’s latest legal brief in the cases, excerpting from our “13 pages of examples of how ‘the government has already specifically and officially acknowledged the program that the CIA now says is secret.'”

Perhaps most telling is Rosenthal’s comment about how little progress we have made since the worst secrecy abuses of the Bush era:

Governments have good reasons for keeping secrets – to protect soldiers in battle, or nuclear launch codes, or the identities of intelligence sources, undercover agents and witnesses against the mob. (Naturally that’s not an exhaustive list.) Governments also have bad reasons for keeping secrets – to avoid embarrassment, evade oversight or escape legal accountability.

The Bush administration kept secrets largely for bad reasons: It covered up its torture memos, the kidnapping of innocent foreign citizens, illegal wiretapping and other misdeeds. Barack Obama promised to bring more transparency to Washington in the 2008 campaign, but he has failed to do that. In some ways, his administration is even worse than the Bush team when it comes to abusing the privilege of secrecy.

So this is not a secret program, but the government continues to hide behind the secrecy shield to avoid turning over the legal document justifying (or at least rationalizing) it. It’s even using the “can’t confirm or deny” fabrication about the existence of the document itself.

My guess is that the Obama administration just wants to avoid public disclosure, scrutiny and accountability. I’d ask someone at the Justice Department, but they wouldn’t be able to tell me, because it’s a secret.

Rosenthal’s column joins the chorus of voices calling for greater transparencyaround targeted killing and for a sensible government response to the ACLU’s FOIA requests. The government must provide the public with the information it needs to assess the legality and wisdom of the CIA’s global targeted killing campaign.