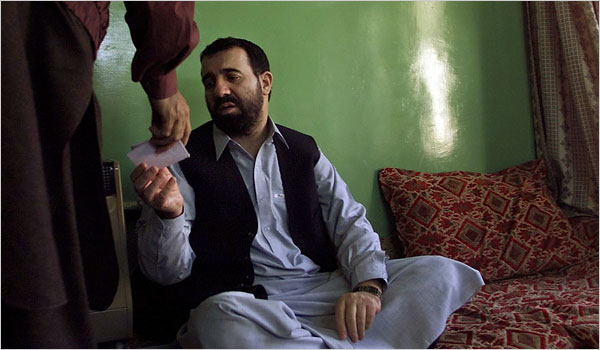 Newly released internal emails from the U.S. private security firm Stratfor state that in 2007 the Bush Administration and CIA ordered the Drug Enforcement Agency to back off a major drug trafficking investigation of Afghan President Hamid Karzai’s half brother.

Ahmed Wali Karzai was an influential power broker in Afghanistan before he was assassinated in July 2011.

The brother of President Karzai of Afghanistan is under investigation by DEA as a major narcotics trafficker. For political reasons, DEA has been told to backoff [sic] by the White House and CIA. DEA is seeing a direct nexus between terrorism and narcotics in Afghanistan with narcotics sales being used to fund jihadist operations.

After a Stratfor analyst asks “how close is karzai to this brother?” Burton replies:

Was described to me as close. Karzai will end up being another Noreiga.
Off the record —
DEA will proceed and take ’em (both?) down anyway, once this White House disappears.
As I’ve said before, every country we have touched, turns to shit.

The crackdown on narcotics in Afghanistan has not yet occurred as opium production rose by about 61 percent from 2010 to 2011 and continued to rise in 2012 as U.S. troops have patrolled the poppy fields during this time.

WikiLeaks has published 2,694 out of what it says is a cache of 5 million internal Stratfor emails (dated between July 2004 and December 2011) obtained by the hacker collective Anonymous around Christmas.

UPDATE: As redditor WhoShotJR notes, current and former American officials told the New York Times in 2009 that Ahmed Karzai received regular payments from the CIA since 2001.