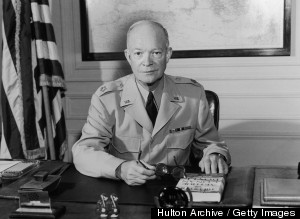 It’s a story that has circulated in and out of the UFO community for years: Did former U.S. President Dwight D. Eisenhower have three meetings with extraterrestrials?

An ex-government consultant says the story is true that the 34th commander in chief chatted, if you will, with aliens at a New Mexico air base, according to reports.

No definitive proof has ever surfaced to confirm this president-meets-aliens tale. However, according to Timothy Good, Eisenhower and FBI officials arranged for the out-of-this-world summit at Holloman Air Force Base.

“Aliens have made both formal and informal contact with thousands of people throughout the world from all walks of life,” Good, an author, lecturer and former consultant to Congress and the Pentagon, said on Frank Skinner’s BBC2 program, “Opinionated.”

Good claims that governments of the world have had ongoing contacts with ETs over many years.

The story about Eisenhower’s close encounter of the very personal kind — where he reportedly met with Nordic-looking aliens — supposedly unfolded while the president was vacationing in Palm Springs, Calif., in February 1954.

Whether you believe this story or not, an interesting related side-story reared its head in 2010. A retired New Hampshire state representative, Henry McElroy Jr., taped an intriguing video announcement in which he revealed seeing a secret briefing document intended for Eisenhower.

This document, according to McElroy,contained information that aliens were in America and that Eisenhower could meet with them.

“To the best of my memory, this brief was pervaded with a sense of hope, and it informed President Eisenhower of the continued presence of extraterrestrial beings here in the United States of America,” McElroy said on the video.

“The tone of the brief indicated to me that there was no need for concern, since these visitors were in no way causing any harm or had any intentions whatsoever of causing any disruption then or in the future,” he explained.

McElroy goes on to say that, although he couldn’t verify times or places where any meetings might have taken place between Eisenhower and “off-world astronauts,” he believed that there were such meetings.

While it’s certainly difficult to prove any of these things, we’re left with the same question that always follows such stories: Who do you believe?