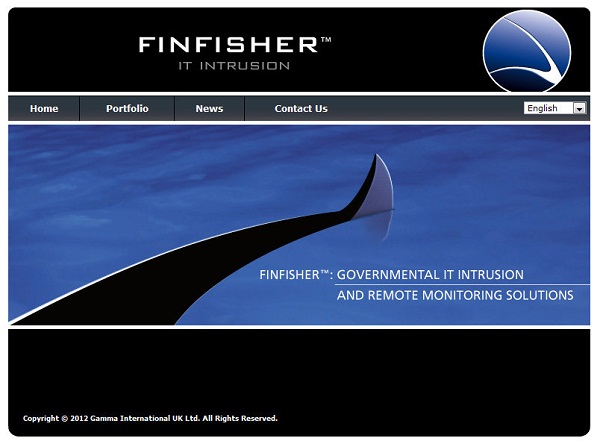 The FinFisher spyware made by U.K.- based Gamma Group likely has previously undisclosed global reach, with computers on at least five continents showing signs of being command centers that run the intrusion tool, according to cybersecurity experts.

FinFisher can secretly monitor computers — intercepting Skype calls, turning on Web cameras and recording every keystroke. It is marketed by Gamma for law enforcement and government use.

Research published last month based on e-mails obtained by Bloomberg News showed activists from the Persian Gulf kingdom of Bahrain were targeted by what looked like the software, sparking a hunt for further clues to the product’s deployment.

In new findings, a team, led by Claudio Guarnieri of Boston-based security risk-assessment company Rapid7, analyzed how the presumed FinFisher samples from Bahrain communicated with their command computer. They then compared those attributes with a global scan of computers on the Internet.

The survey has so far come up with what it reports as matches in Australia, the Czech Republic, Dubai, Ethiopia, Estonia, Indonesia, Latvia, Mongolia, Qatar and the U.S.

Guarnieri, a security researcher based in Amsterdam, said that the locations aren’t proof that the governments of any of these countries use Gamma’s FinFisher. It’s possible that Gamma clients use computers based in other nations to run their FinFisher systems, he said in an interview.

“They are simply the results of an active fingerprinting of a unique behavior associated with what is believed to be the FinFisher infrastructure,” he wrote in his report, which Rapid7 is publishing today on its blog at https://community.rapid7.com/community/infosec/blog.

The emerging picture of the commercially available spyware’s reach shines a light on the growing, global marketplace for cyber weapons with potential consequences.

“Once any malware is used in the wild, it’s typically only a matter of time before it gets used for nefarious purposes,” Guarnieri wrote in his report. “It’s impossible to keep this kind of thing under control in the long term.”

In response to questions about Guarnieri’s findings, Gamma International GmbH managing director Martin J. Muench said a global scan by third parties would not reveal servers running the FinFisher product in question, which is called FinSpy.

“The core FinSpy servers are protected with firewalls,” he said in an Aug. 4 e-mail.

Muench, who is based in Munich, has said his company didn’t sell FinFisher spyware to Bahrain. He said he’s investigating whether the samples used against Bahraini activists were stolen demonstration copies or were sold via a third party.

Muench says that Gamma complies with the export regulations of the U.K., U.S. and Germany.

It was unclear which, if any, government agencies in the countries Guarnieri identified are Gamma clients.

A U.S. Federal Bureau of Investigation spokeswoman in Washington declined to comment.

Officials in Ethiopia’s Communications Minister, Qatar’s foreign ministry and Mongolia’s president’s office didn’t immediately return phone calls seeking comment or respond to questions. Dubai’s deputy commander of police said he has no knowledge of such programs when reached on his mobile phone.

Australia’s department of foreign affairs and trade said in an e-mailed statement it does not use FinFisher software. A spokesman at the Czech Republic’s interior ministry said he has no information of Gamma being used there, nor any knowledge of its use at other state institutions.

At Indonesia’s Ministry of Communications, head of public relations Gatot S. Dewa Broto said that to his knowledge the government doesn’t use that program, or ones that do similar things, because it would violate privacy and human rights in that country. The ministry got an offer to purchase a similar program about six months ago but declined, he said, unable to recall the name of the company pitching it.

The Estonian Information Systems Authority RIA has not detected any exposure to FinSpy, a spokeswoman said. Neither has Latvia’s information technologies security incident response institution, according to a technical expert there.

Bloomberg News reported July 25 that researchers believe they identified copies of FinFisher, following an examination of malware e-mailed to Bahraini activists. Their work, led by security researcher Morgan Marquis-Boire, was published the same day by the University of Toronto Munk School of Global Affairs’ Citizen Lab.

The new study builds on those findings, using the same samples of malicious software.

Guarnieri’s study found, among other things, that the Bahrain server answered anyone connecting to it with the message, “Hallo Steffi.”

The investigators then found this pattern in other computers by searching data from an Internet survey research project, Critical.IO, which has been cataloging publicly accessible computers around the world.

The researchers then developed a map that shows the location of the servers, along with their unique IP addresses on the Internet.

Gamma’s Muench said none of its server components sends out strings such as “Hallo Steffi.”

The earlier Citizen Lab research linked the malware sent to the activists to FinSpy, part of the FinFisher spyware tool kit.

The Citizen Lab research showed the malware took screen shots, intercepted voice-over-Internet calls and transmitted a record of every keystroke to a computer in Manama, the capital of Bahrain, which has been gripped by tension since a government crackdown on protests last year.

Muench said the computer found in Manama isn’t a FinFisher product. Instead, the server very likely runs custom-built software used to forward traffic between two or more other systems, he said.