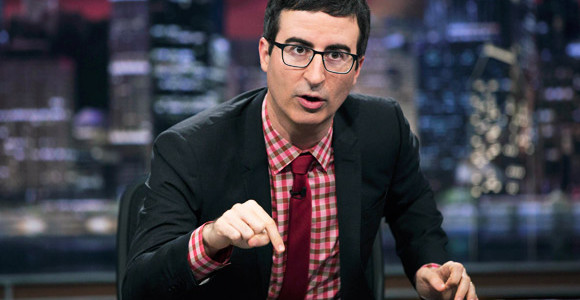 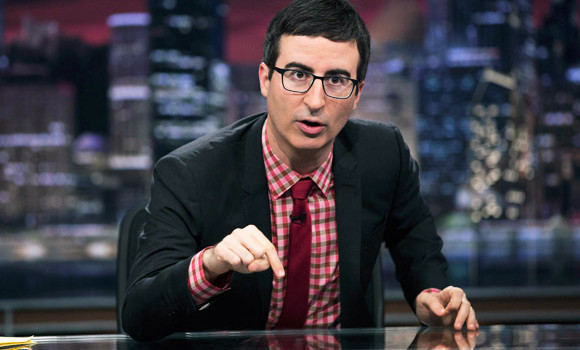 John Oliver is an English comedian who first attracted US attention through his work on The Daily Show with Jon Stewart. In April 2014, he began taping episodes of Last Week Tonight with John Oliver, a weekly half-hour program that satirizes news and current events. Even as a comedy program, it focuses heavily on topics like climate change and other contemporary concerns that lend themselves to critical, in-depth discussions. HBO has given Oliver has full creative freedom and can thus he can target whomever he likes, be they corporations, politicians, or anybody else who considers themselves beyond the reach of the average journalist or comedian.

From the start, Oliver stepped in to boldly expose issues most often misrepresented in mainstream news. In May 2014, he skewered the media’s laughable coverage of the climate change “debate.” Standard news coverage on a topic of any scientific nature generally has a talking head on each side, with Bill Nye the Science Guy (or another familiar face) speaking for the scientists and some nameless “skeptic” speaking for the powers-that-be currently benefiting from the bounty of fossil fuels. Oliver decided to hold his own “statistically accurate” version of one of these conversations, quickly re-confirming that all proof points to the reality of our rapidly warming world.

As Oliver pointed out, 97 percent of the peer-reviewed papers on climate change state that it is real and is caused by human activity. Oliver then showed the audience what a televised debate reflecting that reality would look like. After seating the two or three “skeptics” on one side of a table, Oliver invited the scientists to join them, which led to a horde of people in lab coats swarming in. The scene was hilarious and the video went viral on YouTube. According to energy experts at Dominion Gas, this tactic of marrying humor and education, when it comes to energy usage and climate change, is an easy way to get viewers to tune in and learn without even trying.

A month later, Oliver took on the net neutrality question – despite admitting that many people find the topic “even boring by C-Span standards.” Maintaining net neutrality, however, is vital, for it is the chief principal of the Internet. It holds that all data should be displayed equally and that everybody should be able to access it. That means that sites affiliated with large companies should not have any advantages over other sites. Amongst other things, net neutrality makes it easier for start-ups to compete with larger entities by keeping the playing field level for everybody.

At the time, the FCC was considering changing the rules to produce a two-tiered Internet with high speed service for the bigger sites and slower speeds for everybody else. That, of course, would have drastically changed the Internet – and not for the better. Oliver ended his dissertation with an impassioned and hilarious plea to all the Internet trolls to go forth and send their angry, ranting comments to the FCC opposing the new rules. 45,000 trolls did so – and crashed the FCC’s comment page. The FCC got the hint and scuttled the new rules, at least for the time being. The net neutrality video also went viral. Oliver’s segment on the exploitation of small poultry farmers by large corporations also ended with a call to action, this time directed at members of Congress.

Oliver will also invite guests on to his show who fit and can expand on a given theme. Most famously, he got Edward Snowden to talk about government surveillance. Similarly, he invited Pepe Julian Onziema, a Ugandan LGBT rights activist, to discuss that very topic.

Since his show is on HBO, John-Oliver does have a lot of creative freedom. He doesn’t have to worry about possibly offending any advertisers. If he’d been on network television, he would not have been allowed to skewer General Motors for its mishandling of the recall crisis, since the networks all need GM’s money. HBO is not in that position, so Oliver could lambaste GM. Similarly, his show has fewer commercial breaks than do network programs so he can do things like devote 13 minutes to net neutrality. Not only can he cover a topic in greater depth, he can also issue a call to action.

John-Oliver’s use of humor makes his show both popular and effective. As mentioned earlier, his segment on net neutrality proved to be very popular – despite the fact that most people find the topic not all that interesting. His use of humor helps him make his point. Having several dozen scientists swarm the stage during a “debate” on climate change showed people that the vast majority of scientists accept the reality of climate change. In that same episode, he pointed out the fallacy of taking opinion polls on known scientific facts, for such polls only demonstrate that an embarrassing percentage of Americans don’t understand science.

John-Oliver is also willing to tackle topics like the exploitation of small farmers by large corporations that network journalists cannot or will not touch. Revealing such information can hurt the corporations, for many of their customers would presumably take their business to competitors who treat farmers fairly. To keep that from happening, the corporations try to keep their misdeeds hidden. Since Oliver names names, his fans know which corporations are involved. By using humor to inform and rouse people, Oliver performs a public service.