National Guard Whistleblower: “Doomsday Preppers Will Be Treated As Terrorists” 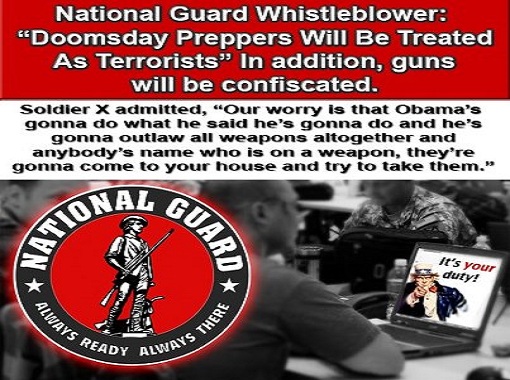 “I do solemnly swear that I will support and defend the Constitution of the United States against all enemies, foreign and domestic…”

So begins the Oath of Enlistment for the U.S. military, but in an explosive interview with a National Guard whistleblower shown below, soldiers are now being advised they will be ordered to break that oath should civil unrest erupt across the country. 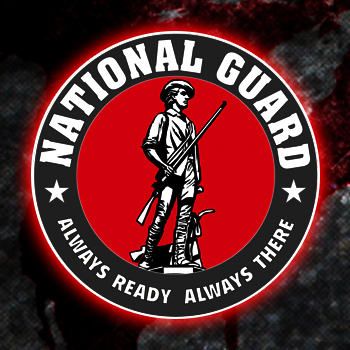 Referred to only as “Soldier X” under promise of anonymity, an Army National Guardsman spoke via phone with Infowars Nightly News Producer Rob Dew regarding a recent briefing his unit underwent on actions the military would take in the event that an Obama election loss sparked rioting in America’s streets.

Citing not only recent widespread threats to riot if Mitt Romney were to become the next U.S. president, but threats to actually assassinate him should he win, Soldier X’s superiors dispensed plans of how the National Guard would be responsible for “taking over” and quelling such unrest.

The soldiers were reportedly told “Doomsday preppers will be treated as terrorists.”

In addition, guns will be confiscated.

“They have a list compiled of all these doomsday preppers that have gone public and they plan to go after them first,” Soldier X said. He claimed those in charge are acting under the belief that preppers will be “the worst part” of any potential civil unrest.

Soldier X was also told that any soldiers in the ranks who are known as preppers will be deemed “defects.” He explained the label meant these soldiers would be treated as traitors. “If you don’t conform, they will get rid of you,” he added.

Unit members also warned not to associate with any fellow soldiers who are preppers.

Not only does the military reportedly plan to target preppers should mass chaos break out, but Soldier X also voiced his concerns regarding civilian gun confiscation.

Soldier X admitted, “Our worry is that Obama’s gonna do what he said he’s gonna do and he’s gonna outlaw all weapons altogether and anybody’s name who is on a weapon, they’re gonna come to your house and try to take them.”

It would not be the first time the National Guard has been used to unconstitutionally disarm law-abiding citizens, robbing them of their Second Amendment right to bear arms. In the aftermath of hurricane Katrina, police and military took to the streets disarming lawful gun owners, including  those who were on dry land and had plenty of stored food and water.

Fast forward to this past summer when a leaked Army manual dated 2006 entitled, “Civil Disturbance Operations” surfaced outlining plans not only to confiscate firearms domestically during mass unrest, but to actually detain and even kill American citizens who refuse to hand over their guns. This manual works in conjunction with “FM 3-39.40 Internment and Resettlement Operations,” another Army manual leaked this year, which instructs troops on how to properly detain and intern Americans into re-education camps, including ways that so-called “psy-op officers” will “indoctrinate” incarcerated “political activists” into developing an “understanding and appreciation of U.S. policies and actions.”

Add these manuals to the plethora of Executive Orders Obama has signed during his term which have dismantled our Constitution piece by piece, including the martial law implementing National Defense Resources Preparedness Executive Order which gives the president the power to confiscate citizens’ private property in the event of any national emergency, including economic.

Add it all to the National Defense Authorization Act (NDAA) in which Obama granted powers to disappear and indefinitely detain American citizens without any due process, and it is easy to see the tyrannical big picture our government has painted.

When asked if he would go along with gun confiscation, Soldier X replied he and his fellow like-minded guardsmen planned to stand down — not answer the phone or show up to post.

“I’m sorry but I don’t believe in suicide,” he said.

Preppers are becoming regular government targets these days, most recently when a Missisippi prepper group member with a clean record was suddenly taken off his flight halfway to Japan and informed he was on the no-fly list, an FBI terrorist watchlist, stranding him in Hawaii. Other preppers have been denied their Second Amendment rights without legitimate cause.

It is beyond glaringly obvious at this point the U.S. government is gearing up for mass civil unrest. Not only has the DHS sparked controversy by purchasing billions of rounds of ammo, but the department even went so far as to begin classifying further purchases, blacking out bullet figures it is using taxpayer money to buy.

In addition, while FEMA can procure a billion dollars in bulk food supplies, the FBI’s Communities Against Terrorism project released a flier instructing military surplus store owners to report any customers who “make bulk purchases of items” including “meals ready to eat”.

Should society as we know it collapse following the election, it would seem the ultimate prepper and the ultimate terrorist is, indeed, the U.S. government.

DHS Insider ‘Rosebud’: “Coming This Spring, Life for the Average American is Going to Change Significantly”