Soul Rape: New Scanners Will Instantly Know Everything About You From 50m Away 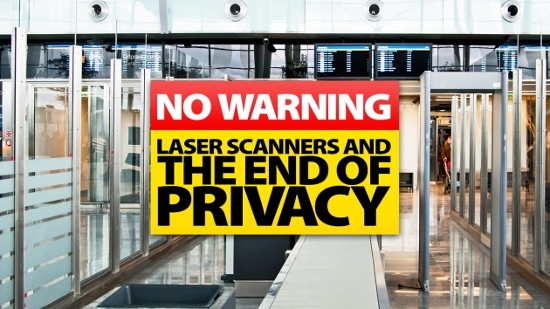 Within the next year or two, the U.S. Department of Homeland Security will instantly know everything about your body, clothes, and luggage with a new laser-based molecular scanner fired from 164 feet (50 meters) away. From traces of drugs or gun powder on your clothes to what you had for breakfast to the adrenaline level in your body—agents will be able to get any information they want without even touching you.

And without you knowing it.

The technology is so incredibly effective that, in November 2011, its inventors were subcontracted by In-Q-Tel to work with the US Department of Homeland Security. In-Q-Tel is a company founded “in February 1999 by a group of private citizens at the request of the Director of the CIA and with the support of the U.S. Congress.” According to In-Q-Tel, they are the bridge between the Agency and new technology companies.

Their plan is to install this molecular-level scanning in airports and border crossings all across the United States. The official, stated goal of this arrangement is to be able to quickly identify explosives, dangerous chemicals, or bioweapons at a distance.

The machine is ten million times faster—and one million times more sensitive—than any currently available system. That means that it can be used systematically on everyone passing through airport security, not just suspect or randomly sampled people.

Analyzing everything in real time

But the machine can sniff out a lot more than just explosives, chemicals and bioweapons. The company that invented it, Genia Photonics, says that its laser scanner technology is able to “penetrate clothing and many other organic materials and offers spectroscopic information, especially for materials that impact safety such as explosives and pharmacological substances.” [PDF]

Formed in Montreal in 2009 by PhDs with specialties in lasers and fiber optics, Genia Photonics has 30 patents on this technology, claiming incredible biomedical and industrial applications—from identifying individual cancer cells in a real-time scan of a patient, to detecting trace amounts of harmful chemicals in sensitive manufacturing processes.

Above: The Genia Photonics’ Picosecond Programmable Laser scanner is capable of detecting every tiny trace of any substance on your body, from specks of gunpowder to your adrenaline levels to a sugar-sized grain of cannabis to what you had for breakfast.

Meanwhile, In-Q-Tel states that “an important benefit of Genia Photonics’ implementation as compared to existing solutions is that the entire synchronized laser system is comprised in a single, robust and alignment-free unit that may be easily transported for use in many environments… This compact and robust laser has the ability to rapidly sweep wavelengths in any pattern and sequence.” [PDF]

So not only can they scan everyone. They would be able to do it everywhere: the subway, a traffic light, sports events… everywhere.

How does it work?

The machine is a mobile, rack-mountable system. It fires a laser to provide molecular-level feedback at distances of up to 50 meters in just picoseconds. For all intents and purposes, that means instantly.

The small, inconspicuous machine is attached to a computer running a program that will show the information in real time, from trace amounts of cocaine on your dollar bills to gunpowder residue on your shoes. Forget trying to sneak a bottle of water past security—they will be able to tell what you had for breakfast in an instant while you’re walking down the hallway.

The technology is not new, it’s just millions times faster and more convenient than ever before. Back in 2008, a team at George Washington University developed a similar laser spectrometer using a different process. It could sense drug metabolites in urine in less than a second, trace amounts of explosive residue on a dollar bill, and even certain chemical changes happening in a plant leaf.

And the Russians also have a similar technology: announced last April, their “laser sensor can pick up on a single molecule in a million from up to 50 meters away.”

So if Genia Photonics’ claims pan out, this will be an incredible leap forward in terms of speed, portability, and convenience. One with staggering implications.

There has so far been no discussion about the personal rights and privacy issues involved. Which “molecular tags” will they be scanning for? Who determines them? What are the threshold levels of this scanning? If you unknowingly stepped on the butt of someone’s joint and are carrying a sugar-sized grain of cannabis like that unfortunate traveler currently in jail in Dubai, will you be arrested?

And, since it’s extremely portable, will this technology extend beyone the airport or border crossings and into police cars, with officers looking for people on the street with increased levels of adrenaline in their system to detain in order to prevent potential violent outbursts? And will your car be scanned at stoplights for any trace amounts of suspicious substances? Would all this information be recorded anywhere?

Above: A page from a Genia Photonics paper describing its ability to even penetrate through clothing.

There are a lot of questions with no answer yet, but it’s obvious that the potential level of personal invasion of this technology goes far beyond that of body scans, wiretaps, and GPS tracking.

According to the undersecretary for science and technology of the Department of Homeland Security, this scanning technology will be ready within one to two years, which means you might start seeing them in airports as soon as 2013.

In other words, these portable, incredibly precise molecular-level scanning devices will be cascading lasers across your body as you walk from the bathroom to the soda machine at the airport and instantly reporting and storing a detailed breakdown of your person, in search of certain “molecular tags”.

Going well beyond eavesdropping, it seems quite possible that U.S. government plans on recording molecular data on travelers without their consent, or even knowledge that it’s possible—a scary thought. While the medical uses could revolutionize the way doctors diagnose illness, and any technology that could replace an aggressive pat-down is tempting, there’s a potential dark side to this implementation, and we need to shine some light on it before it’s implemented.

The author of this story is currently completing his PhD in renewable energy solutions, focusing on converting waste to energy in the urban environment. Even while most of this information is publicly available, he wanted to remain anonymous.