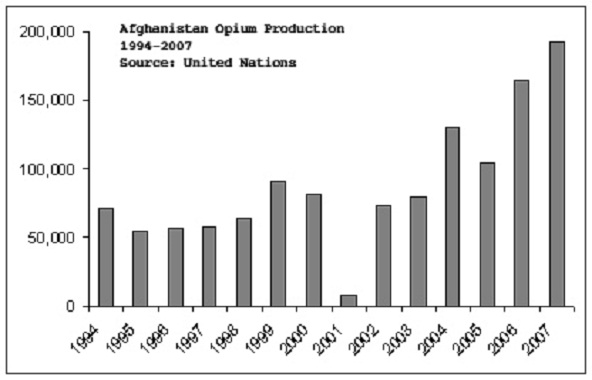 (NaturalNews) Afghanistan is, by far, the largest grower and exporter of opium in the world today, cultivating a 92 percent market share of the global opium trade. But what may shock many is the fact that the US military has been specifically tasked with guarding Afghan poppy fields, from which opium is derived, in order to protect this multibillion dollar industry that enriches Wall Street, the CIA, MI6, and various other groups that profit big time from this illicit drug trade scheme.

Prior to the tragic events of September 11, 2001, Afghanistan was hardly even a world player in growing poppy, which is used to produce both illegal heroin and pharmaceutical-grade morphine. In fact, the Taliban had been actively destroying poppy fields as part of an effort to rid the country of this harmful plant, as was reported by the Pittsburgh Post-Gazette on February 16, 2001, in a piece entitled Nation’s opium production virtually wiped out (http://news.google.com/newspapers?nid=gL9scSG3K_gC&dat=20010216&printsec=…).

But after 9/11, the US military-industrial complex quickly invaded Afghanistan and began facilitating the reinstatement of the country’s poppy industry. According to the United Nations Drug Control Program (UNDCP), opium cultivation increased by 657 percent in 2002 after the US military invaded the country under the direction of then-President George W. Bush (http://www.infowars.com/fox-news-makes-excuse-for-cias-afghan-opium-culti…).

CIA responsible for reinstating opium industry in Afghanistan after 9/11

More recently, The New York Times (NYT) reported that the brother of current Afghan President Hamid Karzai had actually been on the payroll of the CIA for at least eight years prior to this information going public in 2009. Ahmed Wali Karzai was a crucial player in reinstating the country’s opium drug trade, known as Golden Crescent, and the CIA had been financing the endeavor behind the scenes (http://www.infowars.com/ny-times-afghan-opium-kingpin-on-cia-payroll/).

“The Golden Crescent drug trade, launched by the CIA in the early 1980s, continues to be protected by US intelligence, in liaison with NATO occupation forces and the British military,” wrote Prof. Michel Chossudovsky in a 2007 report, before it was revealed that Ahmed Wali Karzai was on the CIA payroll. “The proceeds of this lucrative multibillion dollar contraband are deposited in Western banks. Almost the totality of revenues accrue to corporate interests and criminal syndicates outside Afghanistan” (http://www.thirdworldtraveler.com/Afghanistan/US_Forces_Narcotics_Trade.html).

But the mainstream media has been peddling a different story to the American public. FOX News, for instance, aired a propaganda piece back in 2010 claiming that military personnel are having to protect the Afghan poppy fields, rather than destroy them, in order to keep the locals happy and to avoid a potential “security risk” — and FOX News reporter Geraldo Rivera can be heard blatantly lying about poppy farmers being financially supported by the Taliban, rather than the CIA and other foreign interests.

You can watch that clip here:
http://www.youtube.com/watch?v=aj-b3pB6M7s

So while tens of thousands of Americans continue to be harmed or killed every year by overdoses from drugs originating from this illicit opium trade, and while cultivation of innocuous crops like marijuana and hemp remains illegal in the US, the American military is actively guarding the very poppy fields in Afghanistan that fuel the global drug trade. Something is terribly wrong with this picture.