Why Walking through a Doorway Makes You Forget 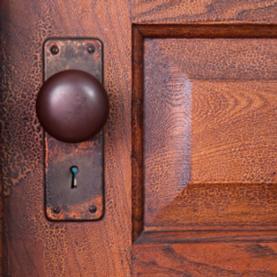 Turn the handle and leave the past behind.Image: iStock/Robert Vautour

The French poet Paul Valéry once said, “The purpose of psychology is to give us a completely different idea of the things we know best.”  In that spirit, consider a situation many of us will find we know too well:  You’re sitting at your desk in your office at home. Digging for something under a stack of papers, you find a dirty coffee mug that’s been there so long it’s eligible forcarbon dating.  Better wash it. You pick up the mug, walk out the door of your office, and head toward the kitchen.  By the time you get to the kitchen, though, you’ve forgotten why you stood up in the first place, and you wander back to your office, feeling a little confused—until you look down and see the cup.

So there’s the thing we know best:  The common and annoying experience of arriving somewhere only to realize you’ve forgottenwhat you went there to do.  We all know why such forgetting happens: we didn’t pay enough attention, or too much time passed, or it just wasn’t important enough.  But a “completely different” idea comes from a team of researchers at the University of Notre Dame.  The first part of their paper’s title sums it up:  “Walking through doorways causes forgetting.”

Gabriel Radvansky, Sabine Krawietz and Andrea Tamplin seated participants in front of a computer screen running a video game in which they could move around using the arrow keys.  In the game, they would walk up to a table with a colored geometric solid sitting on it. Their task was to pick up the object and take it to another table, where they would put the object down and pick up a new one. Whichever object they were currently carrying was invisible to them, as if it were in a virtual backpack.

Sometimes, to get to the next object the participant simply walked across the room. Other times, they had to walk the same distance, but through a door into a new room. From time to time, the researchers gave them a pop quiz, asking which object was currently in their backpack.  The quiz was timed so that when they walked through a doorway, they were tested right afterwards.  As the title said, walking through doorways caused forgetting: Their responses were both slower and less accurate when they’d walked through a doorway into a new room than when they’d walked the same distance within the same room.

This “doorway effect” appears to be quite general.  It doesn’t seem to matter, for instance, whether the virtual environments are displayed on a 66” flat screen or a 17” CRT.  In one study, Radvansky and his colleagues tested the doorway effect in real rooms in their lab.  Participants traversed a real-world environment, carrying physical objects and setting them down on actual tables.  The objects were carried in shoeboxes to keep participants from peeking during the quizzes, but otherwise the procedure was more or less the same as in virtual reality.  Sure enough, the doorway effect revealed itself:  Memory was worse after passing through a doorway than after walking the same distance within a single room.

Is it walking through the doorway that causes the forgetting, or is it that remembering is easier in the room in which you originally took in the information?  Psychologists have known for a while that memory works best when the context during testing matches the context during learning; this is an example of what is called the encoding specificity principle.  But the third experiment of the Notre Dame study shows that it’s not just the mismatching context driving the doorway effect.  In this experiment (run in VR), participants sometimes picked up an object, walked through a door, and then walked through a second door that brought them either to a new room or back to the first room.  If matching the context is what counts, then walking back to the old room should boost recall. It did not.

Facts on Honey and Cinnamon: