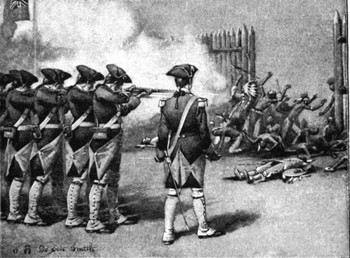 American Holocaust1 British Crown4 Christopher Columbus4 Indians2 Joanelle Romero1 Native Americans6 War52
The powerful and hard-hitting documentary, American Holocaust, is quite possibly the only film that reveals the link between the Nazi holocaust, which claimed at...

It is seldom noted anywhere in fact, be it in textbooks or on the internet, that Hitler studied Americas Indian policy, and used it as a model for what he termed the final solution.

He wasnt the only one either. Its not explicitly mentioned in the film, but its well known that members of the National Party government in South Africa studied the American approach before they introduced the system of racial apartheid, which lasted from 1948 to 1994. Other fascist regimes, for instance, in South and Central America, studied the same policy.

Noted even less frequently, Canadas Aboriginal policy was also closely examined for its psychological properties. America always took the more wide-open approach, for example, by decimating the Buffalo to get rid of a primary food source, by introducing pox blankets, and by giving $1 rewards to settlers in return for scalps of Indigenous Men, women, and children, among many, many other horrendous acts. Canada, on the other hand, was more bureaucratic about it. They used what I like to call the gentlemans touch, because instead of extinguishment, Canada sought to remove the Indian from the Man and the Women and the Child, through a long-term, and very specific program of internal breakdown and replacement call it assimilation. America had its own assimilation program, but Canada was far more technical about it.

Perhaps these points would have been more closely examined in American Holocaust if the film had been completed. The films director, Joanelle Romero, says shes been turned down from all sources of funding since she began putting it together in 1995.

Perhaps its just not good business to invest in something that tells so much truth? In any event, Romero produced a shortened, 29-minute version of the film in 2001, with the hope of encouraging new funders so she could complete American Holocaust. Eight years on, Romero is still looking for funds.

American Holocaust may never become the 90-minute documentary Romero hoped to create, to help expose the most substantial act of genocide that the world has ever seen one that continues even as you read these words.