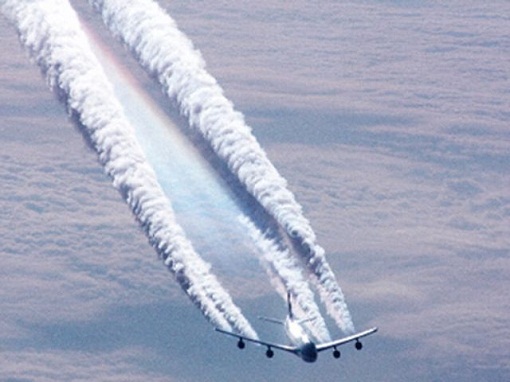 People continue to become ill as high levels of chemicals show up in random testing of soil and water supplies, after witnesses photograph KC-135s and KC-10s outfitted with what appears to be a “spraying device.” The circular device is obviously not a refueling probe. A former Air Force pilot tells a reporter, “Yeah, we have them, but were not supposed to talk about it.”

The South Coast Air Quality Management District tentatively identifies the powder wafting down from the sky as “cedar pollen.” But a biologist retorts that December is not the season when cedar pollen normally appears. And when pollen appears in the spring, it does not “explode.” Several witnesses saw a yellow cloud “exploding” in the skies over the Lake Arrowhead area.

According to a press story, community after community continue to report that hundreds of people are becoming ill at the same time-usually following heavy chemtrail activity. Three physicians report an increasing number of patients being seen for similar illness.

“Persistent hacking coughs, upper respiratory and intestinal distress, pneumonia, extreme fatigue, lethargy, dizziness, disorientation, splitting headaches, elevated arthritis symptoms and unexplainable nosebleeds are just a few of the symptoms these doctors have described. These doctors have said they are seeing larger numbers of patients with these complaints during or within days after the times that the physicians themselves have observed a larger number of chemtrails in the skies above mountain communities.”

Pharmacist Ed Burrows is sick himself. Since early December he has been suffering from a respiratory ailment that has includes a “gooey phlegm” that, despite his best efforts, he has been unable to relieve. Burrows said the issue is raising “high concern” for him that his health may be “jeopardized.” Burrows says he “feels that it is directly related” to recent chemtrail activity.

World population being lied to…

“Our government’s refusal to level with the people indicates that whatever it is they are polluting our environment with must be dangerous and/or unhealthy. There is no need to be secretive if what you are doing is beneficial,” he says. “As the former owner and pharmacist of the Lake Gregory Pharmacy for more than two decades, this is the first time in those 22 years I’ve witnessed so many in our community suffering with respiratory ailments with no apparent cause… ”

Las Vegas reporter Marcus Dalton writes that an archeologist working throughout Nevada began noticing “all white unmarked aircraft” preparing for take-off at Nellis AFB, and at the Mancamp Complex near Tonopah in the late-90s.

“It was these unmarked planes that were constantly laying down the criss-crossing X patterns of lingering chemical-spray trails over Southern Nevada,” the archeologist stated. When he asked the military escort accompanying his civilian research team into “sensitive” areas around Nellis, about the planes, he was strongly advised, “You didn’t see anything.” [Tribune Media Group June 26/06]

Outside Dobbins Air Base in Marietta, Georgia, another observer writes: “We drove up to a light and saw the runway, and saw a large, white plane, with a blue stripe, no markings at all, taxiing to take off.”

A delivery person at Tinker AFB states “I have seen more than 30 of these white, KC-135s parked on the tarmac. I have seen six to 10 take off, one after another. They are, indeed, white with no markings.”

The white planes have also been spotted at a former AFB near Phoenix, and at the previously closed George AFB in the Mojave Desert.

One correspondent claims to have personally seen the spray planes taking off from and landing at McGuire AFB in New Jersey. Active in the Canadian military “since my birth,” Bryan says, “What I have noticed is that unusual trails have been coming from white USAF KC-135s heading to Shiloh, Alaska.