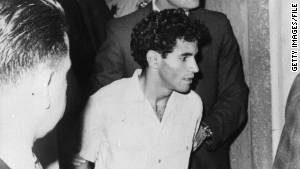 Sirhan Sirhan is taken into custody after the fatal shooting of Sen. Robert F. Kennedy in 1968.

Sirhan Sirhan, convicted of the 1968 assassination of presidential candidate Sen. Robert F. Kennedy, should be freed from prison or granted a new trial based on “formidable evidence” asserting his innocence and “horrendous violations” of his rights, defense attorneys said in federal court papers filed this week.

In a U.S. District Court brief, Sirhan’s lawyers also say that an expert analysis of recently uncovered evidence shows two guns were fired in the assassination and that Sirhan’s revolver was not the gun that shot Kennedy.

Attorneys William F. Pepper and Laurie D. Dusek also allege that fraud was committed in Sirhan’s 1969 trial when the court allowed a substitute bullet to be admitted as evidence for a real bullet removed from Kennedy’s neck.

The attorneys further assert that Sirhan was hypno-programmed to be a diversion for the real assassin and allege that Sirhan would be easily blamed for the assassination because he is an Arab. Sirhan, 67, is a Christian Palestinian born in Jerusalem whose parents brought him and his siblings to America in the 1950s.

Sirhan “was an involuntary participant in the crimes being committed because he was subjected to sophisticated hypno programming and memory implantation techniques which rendered him unable to consciously control his thoughts and actions at the time the crimes were being committed,” court papers said.

Court papers filed by Sirhan’s attorneys say the state “refuses to acknowledge that hypno programming/mind control is not fiction but reality and has been used for years by the U.S. military, Central Intelligence Agency and other covert organizations.

“Though the practices of hypno programming/mind control is hardly new, the public has been shielded from the darker side of the practice. The average person is unaware that hypnosis can and is used to induct antisocial conduct in humans,” Sirhan’s court filings say.

Pepper and Dusek represented Sirhan earlier this year in his unsuccessful request for parole from Pleasant Valley State Prison in Coalinga, California, 200 miles northwest of downtown Los Angeles. He is serving a life sentence.

Sirhan was convicted of killing Kennedy and wounding five other people during the June 5, 1968, shooting inside the kitchen service pantry of the former Ambassador Hotel in Los Angeles.