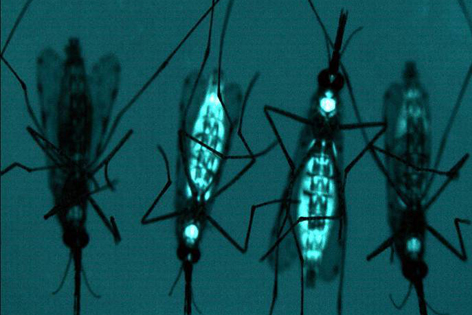 Australian research scientists have developed a strategy for fighting Dengue fever, a viral disease spread by mosquitoes that affects more than 50 million people annually and causes fever and crippling joint and muscle pain—and in some cases even death.

Dengue kills FAR more people worldwide than influenza, yet it is rarely even mentioned by Western media.

A bacterium named Wolbachiapipientis naturally infects many insect species and has the ability to interfere with its host’s reproductive ability in such a way that entire populations become infected within just a few generationsi. When Wolbachia infects mosquitoes, the mosquitoes’ ability to transmit Dengue virus is almost completely blocked.

Researchers are encouraged that these bacterially infected mosquitoes are safe to humans and, once set loose, are capable of spreading on their own and overtaking the wild mosquito populations that transmit disease to humans.

In two northern Australian towns, between 10,000 and 20,000 of these infected mozzies were released (“mozzie” is Australian for mosquito), and wild mosquito infection rates neared 100 percent—meaning, mosquitoes that can infect humans were almost completely replaced by the ones that can’t.

This approach is a change from the swarms of genetically engineered mosquitoes being bred by companies like Oxitec, a British biotechnology company that has released millions of mutant mosquitoes into the fields of unsuspecting Australians.

Dengue is a Far Worse Problem than Influenza

Dengue fever is on the rise worldwide and spreading faster than any other insect-borne viral disease. It is a threat to people in more than 100 countries, potentially affecting 2.5 billion people worldwide. Dengue infection typically causes high fever, crushing headache, severe pain behind your eyes, rash, and excruciating pain in your joints and spine, which is why it’s sometimes called “break bone fever.” Dr. Renu Daval-Drager of the World Health Organization says some cases of Dengue can be fatal, particularly the more serious Dengue hemorrhagic fever.

This under-recognized infectious disease used to be restricted to tropical areas; however, it has recently made its way into Texas, Florida and other southern states and is endemic in 125 countries. And Dengue has reached epidemic levels in Central America.

Outbreaks of Dengue virus occur primarily in areas where Aedes aegypti and sometimes Aedes albopictus mosquitoes live and breed. This includes most tropical areas of the world—the same places where malaria is found. Dengue is also spread by travelers who become infected while visiting Dengue-infested regions.

In the past, the best means for preventing the spread of Dengue involved sustainable, community-based, integrated mosquito control, with limited reliance on chemical insecticides. However, new high-tech strategies are being developed to further combat the spread of this deadly virus. Some of these strategies involve genetically manipulating mosquitoes and then releasing them back into the wild, which can have any number of unforeseen consequences.

No Biotechnology is Without Some Risk

The scientific community has expressed concern about introducing a new type of mosquito that is infected with a bacterium that could be transmitted to humans. However, researchers claim Wolbachia bacterium is completely benign to humans.

According a report by Institute of Science in Society (ISIS)ii:

“In our research Wolbachia-infected insects are feeding on our researchers all the time and there is no sign of any human illness associated with insect Wolbachia. Wolbachia is an insect bacterium that has not been detected living inside humans or any other vertebrates. It can be made to infect human tissue culture cells in the laboratory but these laboratory systems are very artificial and do not predict the actual ability of Wolbachia to infect an actual human being.”

However, Daniel Strickman, national program leader for veterinary and medical entomology at the US Department of Agriculture, remains unconvinced. Strickman expresses some discomfort with releasing an agent that could spread out of control, in a way that does not occur in nature. He states there is a risk that, by making the mosquitoes less susceptible to dengue infection, they may become more susceptible to other viruses such as Japanese encephalitis.

Lead Australian Wolbachia researcher Scott O’Neill claims this problem is “extremely unlikely” as mosquitoes infected with Wolbachia are actually less susceptible to a wide range of pathogens they would normally transmit.iii

How all these changes affect other species consuming these altered insects remains to be seen.

Can scientists simply release flying, human-biting genetically modified creatures into the air anytime they wish? Apparently, the answer to this question is “yes.” And they have.

Oxitec has created male Aedes aegypti mosquitoes that live long enough in the wild to mate, but their offspring die before reaching adulthood, reducing the rates at which they can transmit Dengue virus to humans. The genetically engineered bugs contain a gene that kills them unless they are given tetracycline, a common antibiotic. In the lab, with tetracycline provided, multiple generations of the mosquitoes can be bred. Males are then released into the wild, where tetracycline is not available, and their offspring die without it.

The company claims the technique is safe because only the males are released into the environment—it’s only female mosquitoes that bite and spread diseases.

The problem is, millions of these GE bugs have been released into the open air by Oxitec as a means of field-testing their new “Dengue-proof” mosquitoes, without sufficient review and public consultation. They have conveniently chosen several countries with weak regulations. In 2009, Oxitec released their designer insects onto Grand Cayman Island, an island in the Caribbeanv.

The experiment will go down in scientific history as the first release of GM insects that could bite humans. Not surprisingly, it was conducted in secret.

Once the locals got wind of this, they responded with a fair amount of public outrage—and rightly so! But it didn’t stop there. Oxitec subsequently released their frankenskeeters in Malaysia, Brazilvi, Panama, India, Singapore, Thailand, and Vietnam. And they are seeking approval from the US Agriculture Department to perform similar open-air testing in the Florida Keys.

Even supporters of this technology worry that public reaction will be similar to the one that has stalled acceptance of genetically engineered crops. Regulation has not caught up with science, and GE insects are a brand new adversary in this brave new world of genetic modification. Many companies are “making hay” while regulations are lacking.

Oxitec reports the results of their open-air testing exceeded expectations. The genetically engineered males were found to be only half as successful in mating as the wild ones, which is a rate sufficient to repress the population. Oxitec also reports that a 2010 trial on Cayman Island reduced the population of the targeted mosquitoes by 80 percent for three months. But what is the price of this progress? What will be the cost to humans and to the environment?

Just as with genetically engineered (GE) foods, the long-term effects of GE insects are completely unknown—the Earth and its inhabitants are being used as a laboratory for grand scale genetic experiments. It’s a blatant violation of human rights with regard to human experimentation.

Unfortunately, like so many other things, neither the government nor the biotech companies can offer peer-reviewed scientific proof of the safety of their biotechnology—they have blithely rushed ahead without any concern about the long-term effects. Once released, these insects cannot be “recalled.” There are several problemsvii with the assumption that these genetically engineered bugs are safe for the human population. For starters:

The problem is that genetically modified female mosquitoes can still bite humans. This means the protein, which kills their own larvae, might be injected into humans when the mosquitoes suck their blood, with unknown and potentially ghoulish consequences.

And those are just the mosquitoes…

Oxitec is also the creator of genetically engineered pink bollworm moths, and swarms of this creature have already been unleashed over the fields of Arizona in an effort to overtake natural bollworm populations, which are a pest.5 The company appears to be edging its way toward becoming the next “Monsanto,” already having a monopoly on genetically modified insects. Their next frankenbug is a genetically engineered diamond-back or cabbage moth, slated for release over England.

Other groups are also developing genetically modified insects. One group has created Anopheles mosquitoes that are immune to the malaria parasite they normally carry, and also manufacturing male Anopheles that lack sperm.9

Realizing genetic engineering is risky technology, the World Health Organization is finalizing new guidelines about how GE insects must be deployed in developing countries, which it expects to release by the end of 2012ix.

Your Best Defense Against Dengue

Building a strong immune system is your best defense against this nasty virus. Your immune health depends on the lifestyle choices you make every day. By supporting your body’s own natural ability to defend itself against pathogens, you will not only have resistance to Dengue fever but to every other infectious illness that comes your way. Make sure you address each of the following: