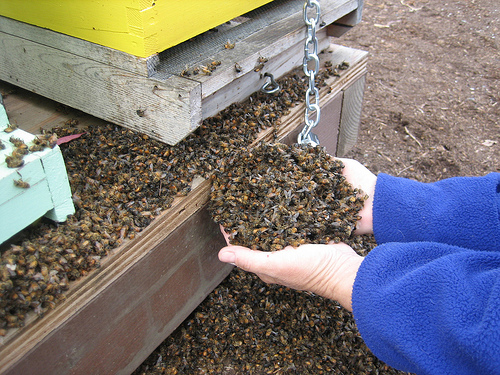 Beekeepers on the south coast have lost up to a thousand hives in a series of poison attacks.

South coast beekeepers are reeling from the senseless destruction of hundreds of hives across the region yesterday.

A toxic poison was sprayed into over 740 honey producing hives in the Batemans Bay area, decimating the local industry.

Police say the attacks on the region’s biggest producers caused  an estimated $150,000 damage, but local producers say the poison will continue to destroy hives over coming weeks.

One of the hardest hit was south coast producer Australian Rainforest Honey.

The company had 240 hives poisoned at its two sites on the south coast, causing tens of thousands of dollars in damage.

One of the company’s directors, Stephen Roberts, was at his site just south of Pebbly Beach today, sifting through piles of dead bees and attempting to save those that hadn’t been lost.

Mr Roberts says the poisoning was a senseless, inexplicable act, and is working with rural police and the NSW Department of Primary Industries to catch those responsible.

Mr Roberts bees are also used to pollinate almonds, and the attacks may have a secondary impact on that industry.

The attacks appear targeted, with the offenders poisoning a series of hidden, remote bushland sites, some up to 40km apart.

Investigators from the Department of Primary Industries were at the hives today taking samples of the poison, but a spokeswoman said it would take a number of days to determine an exact cause of death.

The beekeeping business is highly competitive and has been described as  cutthroat, but there is no indication that any rival honey producer was responsible.

But while authorities try and track down the culprits, there’s little left for Australian Rainforest Honey to do but mop up and start all over again.

“We’re just lucky that we’ve got a few more loads of bees than others have,” Mr Roberts said.

“We’ll feel it, we’ll definitely feel it, but what can you do?”