Silvio Berlusconi Named on US Government Report on People Trafficking 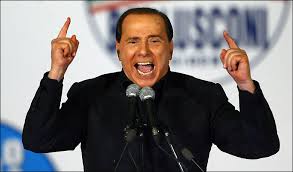 EVERY politician has access to this, and they abuse it regularly. Yet Silvio is coming under fire by the mainstream.  Hmm… could this be the result of yet another puppet, not doing as he’s told?

Silvio Berlusconi, the Italian prime minister, has been named in a US government report on people trafficking as a result of his alleged relationship with ‘Ruby the Heart Stealer’.

By Nick Pisa in Rome

Mr Berlusconi, 75, is accused of having sexual relations with belly dancer Karima El Mahroug at one of the evenings he hosted at his lavish villa and at the time she was just 17 years old.

Miss El Mahroug was one of 33 women who attended the parties and at which it is claimed – among other things – that they dressed as nuns and police officers to perform seductive pole dances and stripteases.

It has now emerged Mr Berlusconi was named in this year’s State Department’s Trafficking in Persons 2011 report which details the parties and describes how one of the guests was a minor.

“In February 2011, judges set a trial date for Prime Minister Silvio Berlusconi for the alleged commercial sexual exploitation of a Moroccan child, media reports include indicate evidence of third party involvement in the case, indicating the girl was a victim of trafficking,” the report said.

It goes on to say about him: “During the reporting period, the country’s (Italy) prime minister was investigated for facilitating child prostitution.”

Prosecutors in Milan have charged three of Berlusconi’s closest friends with procuring prostitutes for his parties and this relates to presence of Miss El Mahroug – who calls herself Ruby the Heartstealer – at the parties which were held at his lavish villa at Arcore near Milan.

The three are Emilio Fede, 80, a news presenter on one of Berlusconi’s main TV channels, showbusiness agent Lele Mora, 55, and Anglo-Italian dental hygenist turned regional politician Nicole Minetti, 26, who was also said to have performed stripteases for him.

The State Department report is put together every year and draws from reports from 180 countries across the world as well as non governmental organisations who help compile case histories and investigations which are detailed in the document.

Opposition MPs reacted with outrage that Mr Berlusconi had been named calling it “another shameful insult” for Italy which they say is already a laughing stock on the international political stage due to the sex scandals surrounding him.

Leoluca Orlando, of the anti-sleaze Italy of Values party said: “Throughout the world Berlusconi is known because of the Ruby affair is known for his smuttiness and know he has been named in this report which details people trafficking.

“This is an indecent calling card for Italy on the international stage because he is the only prime minster who is actually named as well – there is a real risk that the rest of the country will be tarred with the same brush.

Mr Berlusconi’s trial for underage prostitution is due to resume in Milan next month and at the same hearing he has also been accused of abuse of office. Both he and Miss El Mahroug deny any wrong-doing.