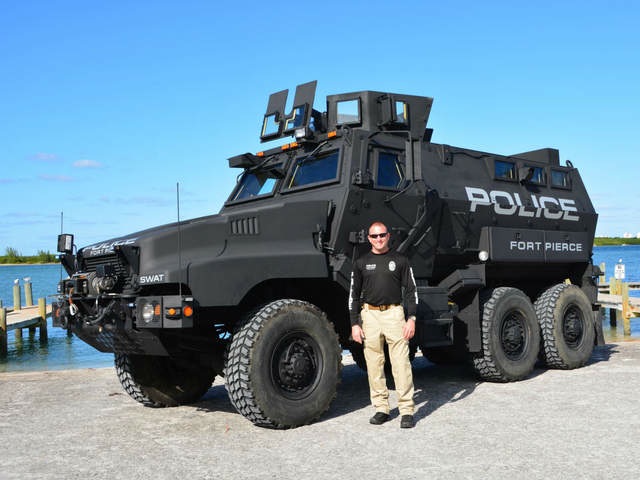 Statistically speaking, Americans should be more fearful of the local cops than “terrorists.”

Though Americans commonly believe law enforcement’s role in society is to protect them and ensure peace and stability within the community, the sad reality is that police departments are often more focused on enforcing laws, making arrests and issuing citations. As a result of this as well as an increase in militarized policing techniques, Americans are eight times more likely to be killed by a police officer than by a terrorist, estimates a Washington’s Blog report based on official statistical data.

Though the U.S. government does not have a database collecting information about the total number of police involved shootings each year, it’s estimated that between 500 and 1,000 Americans are killed by police officers each year. Since 9/11, about 5,000 Americans have been killed by U.S. police officers, which is almost equivalent to the number of U.S. soldiers who have been killed in the line of duty in Iraq.

Because individual police departments are not required to submit information regarding the use of deadly force by its officers, some bloggers have taken it upon themselves to aggregate that data. Wikipedia also has a list of “justifiable homicides” in the U.S., which was created by documenting publicized deaths.

Mike Prysner, one of the local directors of the Los Angeles chapter for ANSWER — an advocacy group that asks the public to Act Now to Stop War and End Racism — told Mint Press Newsearlier this year that the “epidemic” of police harassment and violence is a nationwide issue.

He said groups like ANSWER are trying to hold officers accountable for abuse of power. “[Police brutality] has been an issue for a very long time,” Prysner said, explaining that in May, 13 people were killed in Southern California by police.

As Mint Press News previously reported, each year there are thousands of claims of police misconduct. According to the CATO Institute’s National Police Misconduct Reporting Project, in 2010 there were 4,861 unique reports of police misconduct involving 6,613 sworn officers and 6,826 alleged victims.

Most of those allegations of police brutality involved officers who punched or hit victims with batons, but about one-quarter of the reported cases involved firearms or stun guns.

A big element in the police killings, Prysner says, is racism. “A big majority of those killed are Latinos and Black people,” while the police officers are mostly White, he said. “It’s a badge of honor to shoot gang members so [the police] go out and shoot people who look like gang members,” Prysner argued, giving the example of 34-year-old Rigoberto Arceo, who was killed by police on May 11.

According to a report from the Los Angeles Times, Arceo, who was a biomedical technician at St. Francis Medical Center, was shot and killed after getting out of his sister’s van. The Los Angeles County Sheriff’s Department says Arceo “advanced on the deputy and attempted to take the deputy’s gun.” However, Arceo’s sister and 53-year-old Armando Garcia — who was barbecuing in his yard when the incident happened — say that Arceo had his hands above his head the entire time.

Prysner is not alone in his assertion that race is a major factor in officer-related violence. This past May, astudy from the the Malcolm X Grassroots Movement, an anti-racist activist organization, found that police officers, security guards or self-appointed vigilantes killed at least 313 Black people in 2012 — meaning one Black person was killed in the U.S. by law enforcement roughly every 28 hours.

Prysner said the relationship between police departments and community members needs to change and that when police shoot an unarmed person with their arms in the air over their head, the officer should be punished.

“You cannot have a police force that is investigating and punishing itself,” Prysner said, adding that taxpayer money should be invested into the community instead of given to police to buy more guns, assault rifles and body armor.

Dissatisfied with police departments’ internal review policies, some citizens have formed volunteer police watch groups to prevent the so-called “Blue Code of Silence” effect and encourage police officers to speak out against misconduct occurring within their department.

As Mint Press News previously reported, a report released earlier this year found that of the 439 cases of police misconduct that then had been brought before the Minneapolis’s year-old misconduct review board, not one of the police officers involved has been disciplined.

Although the city of Minneapolis spent $14 million in payouts for alleged police misconduct between 2006 and 2012, despite the fact that the Minneapolis Police Department often concluded that the officers involved in those cases did nothing wrong.

Other departments have begun banning equipment such as Tasers, but those decisions were likely more about protecting the individual departments from lawsuits than ensuring that officers are not equipped with weapons that cause serious and sometimes fatal injuries when used.

To ensure officers are properly educated on how to use their weapons and are aware of police ethics, conflict resolution and varying cultures within a community, police departments have historically heldtraining programs for all officers. But due to tighter budgets and a shift in priorities, many departments have not provided the proper continuing education training programs for their officers.

Charles Ramsey, president of both the Major Cities Chiefs Association and the Police Executive Research Forum, called that a big mistake, explaining that it is essential officers are trained and prepared for high-stress situations:

“Not everybody is going to be able to make those kinds of good decisions under pressure, but I do think that the more reality-based training that we provide, the more we put people in stressful situations to make them respond and make them react.”

In order to help local police officers protect themselves while fighting the largely unsuccessful War on Drugs, the federal government passed legislation in 1994 allowing the Pentagon to donate surplus military equipment from the Cold War to local police departments. Meaning that “weaponry designed for use on a foreign battlefield has been handed over for use on American streets … against American citizens.”

So while the U.S. military fights the War on Terror abroad, local police departments are fighting another war at home with some of the same equipment as U.S. troops, and protocol that largely favors officers in such tactics as no-knock raids.

Radley Balko, author of “Rise of the Warrior Cop,” wrote in the Wall Street Journal in August:

“Since the 1960s, in response to a range of perceived threats, law-enforcement agencies across the U.S., at every level of government, have been blurring the line between police officer and soldier.

“Driven by martial rhetoric and the availability of military-style equipment—from bayonets and M-16 rifles to armored personnel carriers—American police forces have often adopted a mind-set previously reserved for the battlefield. The war on drugs and, more recently, post-9/11 antiterrorism efforts have created a new figure on the U.S. scene: the warrior cop—armed to the teeth, ready to deal harshly with targeted wrongdoers, and a growing threat to familiar American liberties.”

As Mint Press News previously reported, statistics from an FBI report released in September reveal that a person is arrested on marijuana-related charges in the U.S. every 48 seconds, on average — most were for simple possession charges.

According to the FBI’s report, there were more arrests for marijuana possession than for the violent crimes of murder and nonnegligent manslaughter, forcible rape, robbery and aggravated assault — 658,231 compared with 521,196 arrests.

While groups that advocate against police brutality recognize and believe that law enforcement officials should be protected while on duty, many say that local police officers do not need to wear body armor, Kevlar helmets and tactical equipment vests — all while carrying assault weapons.

“We want the police to keep up with the latest technology. That’s critical,” American Civil Liberties Union senior counsel Kara Dansky said. “But policing should be about protection, not combat.”

Despite far fewer officers dying in the line of duty compared with American citizens, police departments are not only increasing their use of protective and highly volatile gear, but are increasingly setting aside a portion of their budget to invest in new technology such as drones, night vision goggles, remote robots, surveillance cameras, license plate readers and armored vehicles that amount to unarmed tanks.

Though some officers are on board with the increased militarization and attend conferences such as the annual Urban Shield event, others have expressed concern with the direction the profession is heading.

For example, former Arizona police officer Jon W. McBride said police concerns about being “outgunned” were likely a “self-fulfilling prophecy.” He added that “if not expressly prohibited, police managers will continually push the arms race,” because “their professional literature is predominately [sic] based on the acquiring and use of newer weapons and more aggressive techniques to physically overwhelm the public. In many cases, however, this is the opposite of smart policing.”

“Coupled with the paramilitary design of the police bureaucracy itself, the police give in to what is already a serious problem in the ranks: the belief that the increasing use of power against a citizen is always justified no matter the violation. The police don’t understand that in many instances they are the cause of the escalation and bear more responsibility during an adverse outcome.

“The suspects I encountered as a former police officer and federal agent in nearly all cases granted permission for me to search their property when asked, often despite unconcealed contraband. Now, instead of making a simple request of a violator, many in law enforcement seem to take a more difficult and confrontational path, fearing personal risk. In many circumstances they inflame the citizens they are engaging, thereby needlessly putting themselves in real and increased jeopardy.”

Another former police officer who wished to remain anonymous agreed with McBride and told Balko,

“American policing really needs to return to a more traditional role of cops keeping the peace; getting out of police cars, talking to people, and not being prone to overreaction with the use of firearms, tasers, or pepper spray. … Don’t get me wrong, I’ve been in more than my share tussles and certainly appreciate the dangers of police work, but as Joseph Wambaugh famously said, the real danger is psychological, not physical.”

Release Us – a short film on police brutality by Charles Shaw

Contributed by Secrets of the Fed of Secretsofthefed.com.