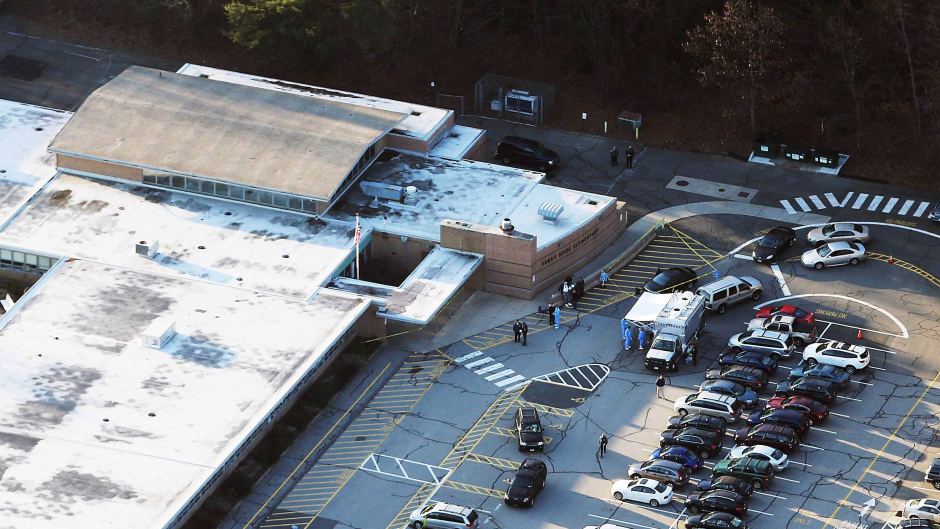 Upon arrival, teams of Troopers and Officers formed “Active Shooter Teams” and immediately entered the school. Teams performed rescues of students and staff, removing them to a safe location as they searched for the shooting suspect within the building. The building was evacuated and students walked hand in hand out to a safe location.

The processing of the scene began immediately with documentation of the crime scene and identifying and gathering both physical and forensic evidence. The urgent focus of the Major Crime investigators was to work with the Office of the Chief State’ s Medical Examiner to establish the identity of all the deceased victims. This was accomplished overnight and the next of kin were all notified that positive identification was made.

The family of each victim was assigned a Trooper or Officer to establish and maintain an open line of communication. This was put into place so families of the victims can have immediate contact related to any questions they may have and to also provide State Police investigators the ability to communicate with families without delay.

The families have requested no press interviews and we are asking that this request be honored.

The deceased victims have been transported to the Office of The Chief State’s Medical Examiner where a post mortem examination will be conducted to determine the manner and cause of death.

A second crime scene was located by investigators at a residence on Yogananda Street. A female was located deceased inside the residence. This scene was secured and an additional State Police Major Crime Squad responded to this scene to investigate this incident. Preliminary information determined that the deceased was a relative of the “shooter” at the Elementary School.

Presently, the school scene is still being processed by detectives and it anticipated that this process will take several days. In addition, Troopers are continuing to follow any and all leads in this case utilizing Law Enforcement in-state as well as out of state as required.

Crisis counseling teams are on-site to provide support to the families of all of the victims.

The investigation is continuing.

HistoricalRecordsVLT A witness describes the man fitting the shooter’s description, that was walked out from the woods behind the school in handcuffs.

This audio is presented as-is from the source http://www.radioreference.com aside from the deletion of some scrambled, inaudible portions and editing out of dead air/silence.

This audio is presented as-is from the source http://www.radioreference.com aside from the deletion of some scrambled, inaudible portions and editing out of dead air/silence.

HistoricalRecordsVLT A witness describes the man fitting the shooter’s description, that was walked out from the woods behind the school in handcuffs.

Additional weapons were found inside the school, not on the shooters person. 20 children, 6 adults killed in Conn. elementary school massacre http://www.cbsnews.com/8301-201_162-57559261/connecticut-elementary-school-ma…

As in the Aurora, Colorado movie theatre massacre earlier this year, witnesses provided testimony of a second shooter beyond James Holmes, the man accused in that horric killing.  James Eagan Holmes (born December 13, 1987) is the suspected perpetrator of a mass shooting that occurred on July 20, 2012 at a movie theater in Aurora, Colorado. He had no known criminal record prior to the shooting.

The differing eyewitness accounts of a possible 2nd shooter or accomplice must be examined & not dismissed outright as ‘fog of war’ type confusion. In this video compilation, 2 separate eyewitnesses give very specific details about a tear gas can being thrown from the other side of the theater, opposite the alleged gunman. Another reports that someone sitting in the front row received a cell phone call or text & then proceeded to the emergency exit from where the gunman entered – He did not say if this individual returned to their seat or not, or give a detailed description: Was it Holmes or someone else? These are very specific details & cannot be simply ignored in lieu of the “official story” that will inevitably emerge. – Attendee (Holmes?) received a cell phone call, left through exit Was there an accomplice? Someone in the audience? A movie theater employee? Or did Holmes simply set a reminder on his own phone? – Gas canister coming from opposite side of theater Could a gas canister have ricocheted off the back wall of the theater? Was it rolled across the floor in the front, making it appear to come from the opposite side? Or, did someone else discharge the gas canister?

Holmes was initially jailed at Arapahoe Detention Center, under suicide watch.  He is being held in solitary confinement to protect him from other inmates, a routine precaution for high-profile cases.

Holmes made his first court appearance in Centennial, Colorado on July 23, before Judge William B. Sylvester. He was read his rights and no bond was given. A mandatory protection order was issued by the judge. The judge appointed a public defender. Holmes said nothing and never looked at the judge.  His appearance, which was described as “dazed” and “confused” fueled speculation about his mental state.

On July 30, Colorado prosecutors filed formal charges against Holmes that included 24 counts of first degree murder, 116 counts of attempted murder, possession of explosive devices, and inciting violence. The multiple charges expand the opportunities for prosecutors to obtain convictions. For each person killed in the shooting, Holmes is charged with one count of murder with deliberation and one count of murder with extreme indifference. Holmes agreed in court to waive his right to a preliminary hearing within 35 days.

On August 9, Holmes’ attorneys said their client is mentally ill and that they need more time to assess the nature of his illness. The disclosure was made at a court hearing in Centennial where news media organizations were asking a judge to unseal court documents in the case.

On September 19, the prosecution filed a motion to add 10 new charges against Holmes and asked to amend 17 others. The additional charges would bring the total counts Holmes faces to 152. Holmes appeared in the Arapahoe County Court house the following day for the first time without his dyed-red hair, but with cropped hair revealing his natural brown color.

Holmes’ lawyers filed an emergency motion on November 14, 2012 to delay a pre-trial hearing, citing an unspecified condition that has left him unable to appear in court. “As a result of developments over the past 24 hours, Mr. Holmes is in a condition that renders him unable to be present in court for tomorrow’s hearing,” They requested to delay the hearing, which they received. It was rescheduled for December. Evidently, Holmes made various suicide attempts referred to as “half-hearted” in days before the scheduled hearing on November