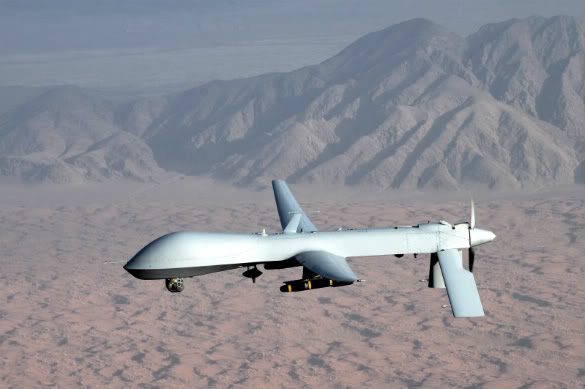 Last week, Venezuelan President Hugo Chavez showcased his country’s first unmanned drone. It seems that an international race to dominate the sky has gone underway and the South American country has become a player in the game of drones with the help of Iran, Russia and China. Retired Army Colonel Douglas Macgregor joins us to explain why more and more countries are rushing to get their hands on an unmanned aircraft.

Air Force Set to Be Deployed Inside U.S. to Collect Data and Search Citizens

The United States Air Force, through the use of unmanned aerial drones, is set to be deployed inside the United States to collect data, investigate places of interest, and share data with local police agencies.

An unclassified Air Force Memo from late April documents the fact that the military is operating drone aircraft domestically and that, through a complete end run around the Constitution, can essentially share it with local law enforcement even if it has no relation to terrorism.

While many articles have already been published detailing the fact that the military is or will be sharing information they collect with local law enforcement, a more startling fact has been largely ignored by the corporate controlled media. (until now)

In a recently published op-ed, Andrew Napolitano outlined the fact that once the military identifies something of interest they can apply to a military commander for permission to conduct searches of American property and or citizens which in turn is a form of martial law.

“It gets worse. If the military personnel see something of interest from a drone, they may apply to a military judge or “military commander” for permission to conduct a physical search of the private property that intrigues them. And, any “incidentally acquired information” can be retained or turned over to local law enforcement. What’s next? Prosecutions before military tribunals in the U.S,” wrote Napolitano.

The Electronic Frontier Foundation has also publicly commented on the fact that the Air Force is now openly recording information on the American people in domestic situations.

“We’ve seen in some records that were released by the Air Force just recently, that under their rules, they are allowed to fly drones in public areas and record information on domestic situations,” explained Jennifer Lynch, of the EFF.

Madison Ruppert, writing for EndtheLie.com, detailed the broad exceptions to a guideline that is supposed to limit the military from non-consensual surveillance.

While the U.S. Air Force’s guidelines claim that drones are not allowed to carry out “non-consensual surveillance” on U.S. citizens or property, there are plenty of exceptions to this allowing such surveillance to occur.

Some of these many exceptions outlined in the Air Force documents include:

– Preventing, detecting or investigating other violations of law

Seems pretty broad, doesn’t it? “Other violations of law” leaves the door wide open for the drones to be used for just about everything. After all, jaywalking is a violation of law. Does this mean that if a drone captures someone jaywalking, the use of military drones in U.S. airspace is somehow justified?

That’s right, the Air Force now has the authority to carry out drone surveillance on American citizens for essentially any violation of law.

Sadly, we now live in a country were 30,000 drones are set to be launched by various law enforcement agencies, the military, and private companies.

The idea of the military not being used against the American people has now been completely thrown out the window with the only hope citizens of this country have left being the support of individual military members who choose to go against these Unconstitutional directives.