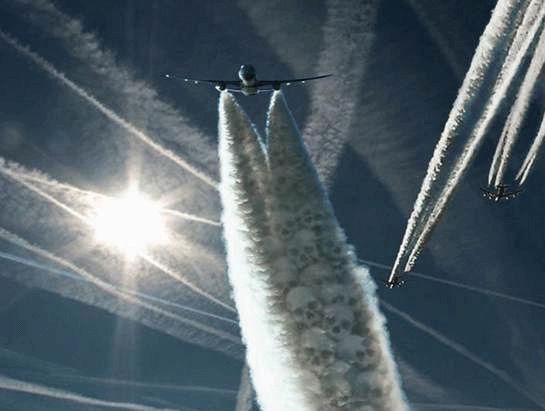 I received the following input from an undisclosed source… with regard to the truth of what is going on with chem trails and what may be contributing to this growing proclivity for zombi-izm in America if not the rest of the world.  Suffice to say that this information came to this person from channels within EUCOM.  Food (!) for thought.

Chemtrails have been employed for numerous desired effects. These include ‘sickening’ the general populous and lowering the soul vibration/hindering the consciousness of the populous. This is coupled with contamination of the water/food supply to achieve the same things.

ow this is happening, they only have to look into the sky to see it.

In recent years we are now seeing, what I call the second phase. The introduction of designer drugs that contain chemical compounds that either ‘activate’ or act as a catalyst for the chemicals dispersed over us in the form of chemtrails.

The active chemicals or molecular structures in these so called ‘Bath salts’ or whatever other synonym you know them by, could also be implemented in regular pharmaceuticals. Drugs, lotions, moisturisers, make up etc.

Nevertheless, no matter how you receive the ‘active agent’, the outcome will be the same. Psychosis, insanity, mental breakdowns. Whatever. The behaviour that has been experienced in Florida recently, I fear is going to become commonplace as the frequency and intensity of both ingredients increase.

This is how I feel they are trying to cause mass hysteria and panic, all within a comfortable time frame of the 2012 Olympics and the upcoming December events (whatever they may be.)

My reply which should at least ease the minds of some… was as follows:

I agree that it certainly looks very plausible that whatever is in the chemtrails contains a number of actionable agents that could increase receptivity to outside electromagnetic or other affects and also lowering immunity etc.

The good news is that if you raise your frequency they can’t get at you in any case.  Of course that doesn’t help that those around you may be vulnerable and losing their minds or whatever the case may be.