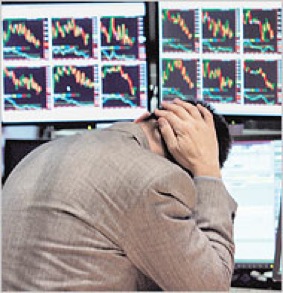 Is the world on the verge of another massive global financial collapse?  Yes.  The western world is drowning in an ocean of debt unlike anything the world has ever seen before, and our financial markets are gigantic casinos that are dependent on huge mountains of risk and leverage remaining very stable.  In the end, this house of cards that has been built on a foundation of sand is going to come crashing down in a horrifying manner.  Usually in this column I go on and on about why things will soon get much worse.  But today I am going to take a bit of a break.  Today, I am going to let some of the top financial professionals in the world tell you why things will soon get much worse.  Many of the quotes that you are about to read just might make the hair on the back of your neck stand up.  Most people out there have no idea what is about to happen.  Most people out there are working hard and are busy preparing for the holidays and they are hopeful that the economy will turn around soon.  But that is not going to happen.  We are heading for another major global financial collapse, and when it happens the U.S. economy is going to get even worse.

The epicenter for the coming global financial collapse is almost certainly going to be in Europe.  As you will see below, financial professionals all over the world are sounding the alarm about Europe.  It is a disaster that everyone can see coming but that nobody seems to be able to prevent.

Of course the failure of the “supercommittee” in the United States certainly is not helping matters.  There is already talk that we may soon see another downgrade for U.S. debt.  It is hard to even describe how incompetent the U.S. Congress is.

There is a tremendous lack of leadership both in the United States and in Europe right now.  The financial world is more interconnected than ever before, and when the financial dominoes start to fall it is going to take a miracle to keep a complete and total disaster from unfolding.

So when the time comes, who is going to step forward and provide that leadership?

That is a really, really good question.

Right now, panic and fear are spreading like wildfire in the financial world and nobody knows for sure what is going to happen next.

But one thing is for certain.  Pessimism is growing stronger by the day.

The following are 17 quotes about the coming global financial collapse that will make your hair stand up….

#1 Credit Suisse’s Fixed Income Research unit: “We seem to have entered the last days of the euro as we currently know it. That doesn’t make a break-up very likely, but it does mean some extraordinary things will almost certainly need to happen – probably by mid-January – to prevent the progressive closure of all the euro zone sovereign bond markets, potentially accompanied by escalating runs on even the strongest banks.”

#2 Willem Buiter, chief economist at Citigroup: “Time is running out fast.  I think we have maybe a few months — it could be weeks, it could be days — before there is a material risk of a fundamentally unnecessary default by a country like Spain or Italy which would be a financial catastrophe dragging the European banking system and North America with it.”

#3 Jim Reid of Deutsche Bank: “If you don’t think Merkel’s tone will change then our investment advice is to dig a hole in the ground and hide.”

#4 David Rosenberg, a senior economist at Gluskin Sheff in Toronto: “Lenders are finding it difficult to finance their day-to-day operations with short-term funding. This is a lot like 2008 but with more twists.”

#5 Christian Stracke, the head of credit research for Pimco: “This is just a repeat of what we saw in 2008, when everyone wanted to see toxic assets off the banks’ balance sheets”

#6 Paul Krugman of the New York Times: “At this point I’d guess soaring rates on Italian debt leading to a gigantic bank run, both because of solvency fears about Italian banks given a default and because of fear that Italy will end up leaving the euro. This then leads to emergency bank closing, and once that happens, a decision to drop the euro and install the new lira. Next stop, France.”

#7 Paul Hickey of Bespoke Investment Group: “More and more, we are hearing anecdotal comments from individual and professionals that this is the most difficult environment they have ever experienced as the market is like a fish flopping around after being taken out of the water.”

#8 Bob Janjuah of Nomura International: “Germany appears to be adamant that full political and fiscal integration over the next decade (nothing substantive will happen over the short term, in my view) is the only option, and ECB monetisation is no longer possible. I really think it is that clear and simple. And if I am wrong, and the ECB does a U-turn and agrees to unlimited monetisation, I will simply wait for the inevitable knee-jerk rally to fade before reloading my short risk positions. Even if Germany and the ECB somehow agree to unlimited monetisation I believe it will do nothing to fix the insolvency and lack of growth in the eurozone. It will just result in a major destruction of the ECB‟s balance sheet which will force an ECB recap. At that point, I think Germany and its northern partners would walk away. Markets always want short, sharp, simple solutions.”

#9 Dan Akerson, CEO of General Motors: “The ’08 recession, which was a credit bubble that manifested itself through primarily the real estate market, that was a serious stress….This is much more serious.”

#10 Francesco Garzarelli of Goldman Sachs: “Pressures on Euro area sovereign bond markets have progressively intensified and spread like a wildfire.”

#12 Dr. Pippa Malmgren, the President and founder of Principalis Asset Management who once worked in the White House as an adviser to President Bush: “Market forces are increasingly determining what the options are and foreclosing on options policymakers thought they had. One option which is now under discussion involves permitting a country to temporarily leave the Euro, return to its native currency, devalue, commit to returning to the Euro at a better debt to GDP ratio, a better exchange rate and a better growth trajectory and yet not sacrifice its EU membership. I would like to say for the record that this is precisely the thought process that I expected to evolve,but when I proposed this possibility back in 2009, and again in September 2010, I had a 100% response from clients and others that this was “impossible” and many felt it was “ridiculous”. They may be right but this is the current state of the discussion. The Handelsblatt in Germany has reported this conversation, but wrongly assumes that the country that will exit is Germany. I think that Germany will have to exit if the Southern European states do not. Germany’s preference is to stay in the Euro and have the others drop out. The problem has been the Germans could not convince the others to walk away. But, now, market pressures are forcing someone to leave. Germany is pushing for that someone to be Italy. They hope that this would be a one off exception, not to be repeated by any other country. Obviously, though, if Italy leaves the Euro and reverts to Lira then the markets will immediately and forcefully attack Spain, Portugal and even whatever is left  of the already savaged Greeks. These countries will not be able to compete against a devalued Greece or Italy when it come to tourism or even infrastructure. But, the principal target will be France. The three largest French banks have roughly 450 billion Euros of exposure to Italian debt. So, further sovereign defaults are certainly inevitable, but that is true under any scenario. Growth and austerity will not do the trick, as ZeroHedge rightly points out. Ultimately, I will not be at all surprised to see Europe’s banking system shut for days while the losses and payments issues are worked out. People forget that the term “bank holiday” was invented in the 1930’s when the banks were shut for exactly the same reason.”

#13 Daniel Clifton, a policy strategist with Strategas Research Partners on the potential for more downgrades of U.S. debt: “We would expect further downgrades, a first downgrade from Moody’s and Fitch and possibly a second downgrade from S&P.”

#14 Warren Buffett on the problems in the eurozone: “The system as presently designed has revealed a major flaw. And that flaw won’t be corrected just by words. Europe will either have to come closer together or there will have to be some other rearrangement because this system is not working”

#15 David Kostin, equity strategist for Goldman Sachs: “The wide range of possible outcomes on both the super committee process and the unstable political economy in Europe drives our view that investors should assume the worst while hoping for the best.”

#16 Mark Mobius, the head of the emerging markets desk at Templeton Asset Management: “There is definitely going to be another financial crisis around the corner”

#17 Gerald Celente, founder of The Trends Research Institute: “The whole system is going down. Pull your money out your Fidelity account, your Scwhab accout, and your ETFs.”

Are you starting to get the picture?

When so many top financial professionals are freaking out like this, perhaps the rest of us should start paying attention.

They are telling us that “time is running out”.

They are telling us that “there is definitely going to be another financial crisis”.

They are telling us that “the whole system is going down”.

Yes, a devastating financial collapse really is coming.  Just like in 2008, it will seem like the “end of the world” while it is happening, but it won’t be.  It will severely damage our financial system and our economy, but it will not finish us off.

Think of it this way.  When you build a sand castle at the beach, it doesn’t get totally wiped out by the first wave or the second wave that hits it.  Each wave does significant damage, but the destruction of your sand castle is a process.

It is the same thing with the U.S. economy.  We once had the most incredible economic machine that the world has ever seen.  It is constantly being guttedand the financial crisis of 2008 hit us really hard, but we are still doing okay.

After this next financial crisis we will be in even worse shape.  But we will still be breathing.

More “waves” will come after this next financial crisis.  If we continue on the road that we are on, our economy will progressively get worse and worse.

Not everyone will agree with this analysis, and that is okay.  In the end, time will reveal the truth to all of us.

Right now, we all need to get ready for the next wave that is about to hit us.  A lot of people are going to lose their jobs over the next few years.  Hopefully you are prepared for that.

THE BEST VIDEO ON “OCCUPY THE WORLD”