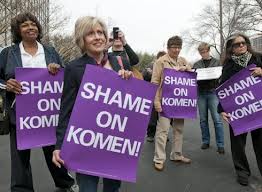 It’s time to demand an end to the cover-up of the leading cause of breast cancer – tight bras.

It’s been 20 years since our research showing a major link between breast cancer and the wearing of tight bras for long periods of time daily was announced to cancer experts in our book, Dressed To Kill: The Link Between Breast Cancer and Bras.

This breakthrough information was promptly ignored, ridiculed, and censored by the very people and organizations whose mission is to find a cure and cause of this modern day epidemic.

Despite the resistance, our message did get out to millions of women, some of whom discovered on themselves that ending the habit of constricting their breasts with bras improved overall breast health – including reducing breast pain, cysts, and tenderness.

While the cancer industry still thinks of the lymphatic system as merely the pathway for the spread of cancer, leading them to remove lymph nodes creating painful and disabling lymphedema in their patients, there are now more healthcare providers who understand the vital role the lymphatic system plays in disease prevention.

They understand how constriction of the lymphatic drainage from the breasts caused by tight bras can result in tissue toxification, cysts, pain, and ultimately, cancer.

But, despite the successes of women regaining breast health by altering their bra wearing habits, the cancer detection and treatment industry has consistently and arrogantly dismissed the bra-cancer link.

Does a bra really contribute to breast cancer?

It does, according to at least 5 research studies and numerous healthcare providers, including oncologists and MD’s. Even some lingerie manufacturers have developed new bra designs hoping to minimize lymphatic constriction and thereby help prevent breast cancer – citing the bra-cancer theory for their patents.

But it doesn’t, according to the American Cancer Society (ACS) and the Susan G. Komen Foundation, fundraising giants of the cancer detection and treatment world – which consider the link absurd and unworthy of serious consideration, and unquestionably assume that research showing a link must have some other explanation besides bras.

Shrugging off the bra-cancer link is killing hundreds of thousands of women and wasting billions of dollars in unnecessary detection and treatment.

As breast cancer researchers, we are calling for a boycott of these organizations until they stop dismissing the bra-cancer link, and begin educating doctors and women about the cancer hazards of wearing tight bras.

What is the risk of wearing a bra?

Our research showed that bra-free women have about the same incidence of breast cancer as men, and that the tighter and longer a bra is worn the higher the incidence rose, up to 100 times greater for 24/7 bra wearers.

Why are women not hearing about this from the ACS and Komen Foundation? Why are these organizations, so eager to fund raise for a cure, so opposed to preventing this disease by addressing the bra-cancer link?

Could it be because lingerie companies donate to their charities? Could it be that preventing this disease by challenging the cultural norm of bra wearing is too taboo for these detection and treatment focused organizations?

Whatever their reason, it is wrong for the bra-cancer link to be dismissed and ignored. Because of this unscientific stonewalling of this information, over the past 20 years 2,000,000 women in the United States alone have gotten breast cancer – which may have been prevented by simply loosening their bra and wearing it less often, each day.

So, when the ACS or Komen Foundation ask for a donation, send them your bra, instead. This will give them the message, and help you prevent breast cancer at the same time.

About the author: Sydney Ross Singer is a world-renown medical anthropologist, author, and director of the Institute for the Study of Culturogenic Disease, located in Hawaii. A pioneer in the field of applied medical anthropology, Sydney, along with his wife and co-author, Soma Grismaijer have written numerous groundbreaking books that provide new theories, research, and revelations on disease causation and prevention, including the internationally acclaimed book, Dressed To Kill: The Link Between Breast Cancer and Bras. For more information – visit:KillerCulture.com

“Scientific evidence does not support a link between wearing an underwire bra (or any type of bra) and an increased risk of breast cancer. There is no biological reason the two would be linked, and any observed relationship is likely due to other factors.”

Internet e-mail rumors and at least one book have suggested that bras cause breast cancer by obstructing lymph flow. There is no good scientific or clinical basis for this claim.

Studies that support the bra/cancer link:

1991 Harvard study (CC Hsieh, D Trichopoulos (1991). Breast size, handedness and breast cancer risk. European Journal of Cancer and Clinical Oncology 27(2):131-135.). This study found that, “Premenopausal women who do not wear bras had half the risk of breast cancer compared with bra users…”

1991-93 U.S. Bra and Breast Cancer Study by Singer and Grismaijer, published in Dressed To Kill: The Link Between Breast Cancer and Bras (Avery/Penguin Putnam, 1995; ISCD Press, 2005). Found that bra-free women have about the same incidence of breast cancer as men. 24/7 bra wearing increases incidence over 100 times that of a bra-free woman.

Singer and Grismaijer did a follow-up study in Fiji, published in Get It Off! (ISCD Press, 2000). Found 24 case histories of breast cancer in a culture where half the women are bra-free. The women getting breast cancer were all wearing bras. Given women with the same genetics and diet and living in the same village, the ones getting breast disease were the ones wearing bras for work.

2011 a study was published, in Spanish, confirming that bras are causing breast disease and cancer.http://www.portalesmedicos.com/publicaciones/articles/3691/1/Patologias-mamarias-generadas-por-el-uso-sostenido-y-seleccion-incorrecta-del-brassier-en-pacientes-que-acuden-a-la-consulta-de-mastologia- It found that underwired and push-up bras are the most harmful, but any bra that leaves red marks or indentations may cause disease.

Studies that refute the bra/cancer link:

Animals Eat Psychoactive Plants for an Intentional Break from Reality