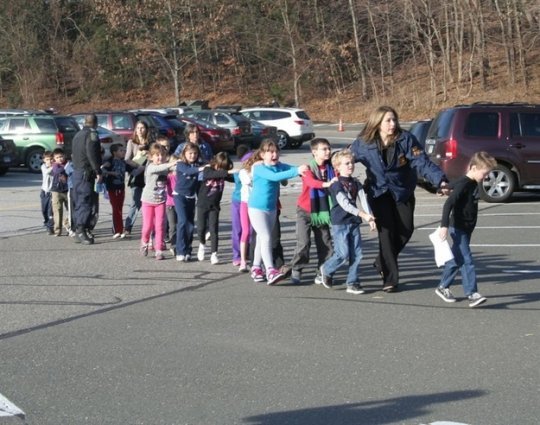 Police have arrested a possible second shooter in the Connecticut school shooting that took the lives of at least 18 children and 27 people in total.

The death toll in the Sandy Hook Elementary School shooting is said to be preliminary and will likely change, CBS News senior correspondent John Miller reported. Though it is not clear if there was a second shooter inside the school, but police reportedly had another individual in custody who was suspected of being involved in the massacre.

Initial reports noted that unconfirmed information indicates that the gunman was the father of one of the students. The second shooter suspect is close to 20 years old and reportedly drove to the school from New Jersey, CBS News reported.

Witnesses described a chaotic scene with multiple people shot. An 8-year-old student told WCBS-TV he encountered the gunman as he was walking to the school’s office.

“I saw some of the bullets going down the hall and then a teacher pulled me into her classroom,” the boy said.

Witnesses say that the principal, Dawn Hochsprung, was shot, along with a school psychologist and the vice-principal, CNN reported. Much of the shooting took place in a kindergarten classroom, the Courant added.

Newtown School Shooting Story Already Being Changed by the Media

The national media is ablaze today with coverage of the tragic elementary school shooting in Newtown, CT, where 27 people have reportedly been killed, including 18 children.

As always, when violent shootings take place, honest journalists are forced to ask the question: “Does this fit the pattern of other staged shootings?”

One of the most important red flags of a staged shooting is a second gunman, indicating the shooting was coordinated and planned. There are often mind control elements at work in many of these shootings.

The Aurora “Batman” shooter James Holmes, for example, was a graduate student actually working on mind control technologies funded by the U.S. government.

There were also chemical mind control elements linked to Jared Lee Loughner, the shooter of Congresswomen Giffords in Arizona in 2011.

According to multiple eyewitness reports from Aurora, Colorado, including at least one caught on camera by mainstream media news reports in Colorado, James Holmes did not operate alone.

Today, the exact same thing is happening with the Newton, CT school shooting.

As the story of this shooting was first breaking, the news was reporting a second gunman.

FoxNews reported that this second gunman was “led out of the woods by officers” and then questioned. The original source of this report was the Connecticut Post.

A local CT CBS affiliate was also reporting, “CBS News reports that a potential second shooter is in custody and that SWAT is now investigating the home of the suspect.

A witness tells WFSB-TV that a second man was taken out of the woods in handcuffs wearing a black jacket and camouflage pants and telling parents on the scene, ‘I did not do it.’”

“A lone gunman killed 27 people at an elementary school here, including 18 children, in a terrifying early Friday morning shooting spree,” reports USA Today. It makes no mention whatsoever of a second gunman.

NBC News is also now chiming in with the “lone gunman” version of the story, eliminating any mention of a second gunman from its coverage of the tragic event.

Another story authored by NBC News carries the title, “26 dead after lone gunman assaults Connecticut elementary school.” Once again, no mention of a second gunman as reported by eyewitnesses.

When key elements of the story keeps changing, something is fishy

Journalists are trained to ask questions, and one of the questions I have right now is: Why was the second gunman suddenly dropped from media coverage after the first few hours of this story developing?

And why is there always a second gunman in these recent mass shootings that seem to be engineered to maximize emotional shock value due to the sheer horror of all the innocent deaths?

This story is continuing to develop, and we’ll keep asking questions here on Natural News. Our hearts and prayers go out to the children and families impacted by this violent tragedy.

Given the terrible loss of life that has taken place here, shouldn’t we all seek to get to the bottom of WHY these shootings all seem to fit a common pattern of multiple mind-controlled shooters followed by an almost immediate media cover-up of the facts?

For the sake of those children who were killed today, I want to get to the bottom of this and expose the REAL story, for the purpose of stopping this violence from targeting yet more innocents in the future.