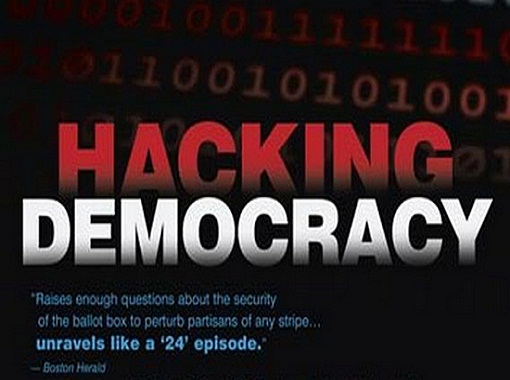 To support the work of Black Box Voting: http://www.blackboxvoting.org/donate.html
You can discuss this here: http://www.bbvforums.org/â€‹forums/messages/8/82118.html

Amazingly, Accenture, which sold its crap-on-a-stick high-school sophomoric completely insecure malfunctioning voter registration software to a bunch of states, so unsuccessfully that Colorado refused to pay and others, like Wisconsin and Shelby County, bought out the source code in order to try to bandaid it into a functional system, has decided to issue a cease and desist against Black Box Voting for exposing its flawed software to the public.

Last time a voting system company did a DMCA takedown notice (Diebold, in 2004) it got socked with punitive charges for abusing the Digital Millennium Copyright Act, trying to use it to block distribution of material clearly published in the public interest.

If you want a copy of the voter registration software I posted Thursday, might as well get it right now — and mirror it, torrent it, dropbox it, or whatever. I’ll probably pull it down by June 27, not because their claim is valid, but because there are higher priorities for spending my time during this election season and thanks to Slashdot and some pals in Europe, this software has now been widely mirrored elsewhere.

Here is the DMCA issued to Black Box Voting:

We have received a notice pursuant to the Digital Millennium Copyright Act (“DMCA”) from Accenture Global Services Ltd regarding certain content appearing at the above-referenced website (the “Website”). A copy of this notice has been sent to you via email at [redacted]. This company alleges that material posted on your company’s website infringes on their copyright. Please remove the content claimed to be infringing from the Website and confirm to me in writing that you have done so by 8:00 A.M. Central Time, 6/27/2012. If the allegedly infringing content is not removed and/or I have not received your written confirmation by that time, Rackspace will suspend network access to the server(s) hosting the Website.

Please note that you may provide a counter notification, stating that the posted material is not infringing the alleged copyright, in accordance with the provisions of 17 U.S.C. Ã‚Â§512(g)(3) to Rackspace’s designated agent:

(Note that Rackspace is only doing what it’s required to do. They are a superb web hosting company, and have helped keep the Black Box Voting sites up and secure for many years now.)

After releasing it into the wild, we can all see that the system is hardly worth the $20 MILLION Accenture tried to charge the state of Colorado, with equally exhorbitant fees hitting taxpayers in other states and counties.

There are multiple possible explanations for how this system doubles and triples reported votes for some voters (oddly, in White Republican suburbs), and for why it likes to alter people’s political party and erase their voter history.

Watch “Hacking Democracy” (search it on YouTube) for a real-life example of how simple it is to bypass all passwords using a VBA script, to implement anything you want with hidden code commands in systems built on this platform, which is also used for the Diebold GEMS system.

Yah, so where is “Accenture Global Services” based out of anyway? It was the Cayman Islands. Or is it now another tax-evading corporate secrecy haven, used not only to avoid paying taxes but to prevent the American public from knowing anything about the creepy white men who control corporate ownership?

PERMISSION TO REPRINT GRANTED WITH LINK TO BLACKBOXVOTING.ORG

From Wikipedia, the free encyclopedia
Jump to: navigation, search

Hacking Democracy is a 2006 documentary film by producer Robert Carrillo Cohen and producer / directors Russell Michaels and Simon Ardizzone, shown on HBO. Filmed over three years it documents American citizens investigating anomalies and irregularities with ‘e-voting‘ (electronic voting) systems that occurred during the 2000 and 2004 elections in the U.S.A., especially in Volusia County, Florida. The film investigates the flawed integrity of electronic voting machines, particularly those made by Diebold Election Systems, and the film culminates dramatically in the on-camera hacking of the in-use / working Diebold election system in Leon County, Florida.

In 2007 Hacking Democracy was nominated for an Emmy award for Outstanding Investigative Journalism.[1]

The documentary follows Bev Harris and Kathleen Wynne, director and associate director for nonprofit election watchdog group Black Box Voting, as they attempt to discover the extent to which it would be possible to alter results on the electronic voting machines of Diebold Election Systems (now Premier Election Solutions). Andy Stephenson, an employee of Black Box Voting from July-December 2004, assisted with comparisons of audit documents in Volusia County and obtained a secret videotape of Harris interviewing a voting machine testing lab. Kathleen Wynne captured live video of Harris finding voting machine records in a Volusia County trash bag, and captured video of Cuyahoga County elections workers admitting that the initial 3% recount ballots had not been randomly selected during the 2004 presidential election. Harris and Wynne then embarked on a series of five voting machine hack tests with Dr. Herbert Hugh Thompson and Harri Hursti in 2005 and 2006. During the course of the documentary, multiple methods of tampering with the votes are shown.

The first is through editing the database file that contains the voting totals. This file is a standard Microsoft Access database, and can be opened by normal means outside of the encompassing voting program without a password. Some jurisdictions have disabled Microsoft Access, making it more difficult to alter the database, but this protection was shown to be bypassed by Dr. Herbert Hugh Thompson through a Visual Basic program which searched for a string of text and edited the file through external means. However, alterations of the results in either of these fashions would be caught if a vigilant elections official compared the results with voting machine tapes.[2]

Another hacking technique was demonstrated through hacking the actual computer code used in the Diebold Accu-Vote memory cards. This method was discovered by Finnish computer security expert Harri Hursti and is known as “the Hursti Hack“. In this hack, Harri Hursti rigged the Diebold optical scan voting system to make the wrong candidate win by adding negative (minus) votes to one race. This resulted in that race having votes literally subtracted from its vote total. These methods were tested by the Leon County Supervisor of Elections, Ion Sancho, on the actual Diebold optical scan voting system used by Tallahassee, Florida in all their prior elections. This method demonstrated, contrary to a previous Diebold statement, that a person attempting to rig the votes of a precinct would need access to only the memory card, not the optical scan voting system or tabulation software. This method, when cross-checked between the optical scan voting system and tabulation software, appears legitimate, and further produces a false zero-vote print-out to verify that the memory card has no votes inside it before voting begins. Following this historic hack Ion Sancho stated: “If I had not known what was behind this I would have certified this election as a true count of a vote.”[2]

Even though no one from Diebold Election Systems admitted to having seen the film,[3] Diebold President David Byrd suggested that Hacking Democracy was “replete with material examples of inaccurate reporting”, and demanded that it not be aired.[4][5] His criticism was based on an earlier film made by the same three filmmakers. However, HBO refused to remove it from their schedules. In addition Diebold wrote a letter to HBO referring to the famous vote changing ‘Hursti Hack’ featured in the film, stating that “Harri Hursti is shown attacking a Diebold machine in Florida. But his attack proved later to be a complete sham.”

California’s Secretary of State commissioned a Special Report by scientists at UC Berkeley to investigate the Hursti Hack. Page 2 of their report states:

Harri Hursti’s attack does work: Mr. Hursti’s attack on the AV-OS is definitely real. He was indeed able to change the election results by doing nothing more than modifying the contents of a memory card. He needed no passwords, no cryptographic keys, and no access to any other part of the voting system, including the GEMS election management server.

One of Diebold’s objections to the film was that it failed to mention that Avi Rubin, a Johns Hopkins computer science professor and vocal Diebold critic, may have a conflict of interest. Rubin at one point owned stock options in VoteHere, which sells auditing software and systems for voting machines. However, Rubin disposed of his stock options and withdrew from the VoteHere advisory board in August 2003, and says he had not had any meaningful contact since joining over two years before, except occasionally receiving press clippings.[6]

The film was released on DVD on March 20, 2007. It includes deleted scenes, a trailer and director biographies.