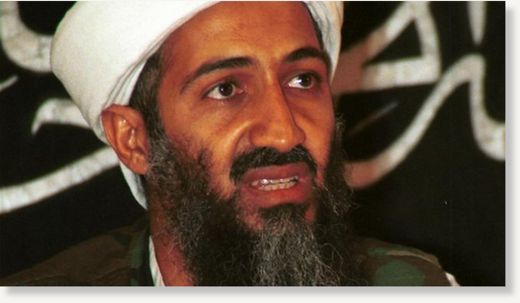 I’m sure we’re all very tired by now of the Osama bin Laden nonsense, I know I am, and I really wish it would just go away. Sadly, that seems an unlikely prospect in the near future.

I’ve already provided more than enough evidence for all rational people to seriously doubt the authenticity of the “Osama bin Laden is dead” story. I’ve also exposed the many faked images and videos of the alleged terrorist mastermind that were released over the past 10 years. But the US government and CIA aren’t ready to quit just yet. It would appear that they’re determined to push the boundaries of belief and exploit public credulousness to the max (and perhaps beyond).

You’re probably aware that yesterday, Sat. 7th May 2011, the US government released “new” videos of ‘bin Laden’ that they claimed were part of the haul from the ‘compound’ in Pakistan, which, by the way, is very conveniently scheduled for destruction.

These new videos include footage that is similar to previous ‘bin Laden’ tapes, but also include footage of some guy sitting in a room watching news reports about Osama bin Laden. The US government and the fawning Western media are claiming that the guy sitting on the floor watching television is Osama bin Laden in his ‘compound’ and that the video could have been made as recently as Spring 2011. The problem is that we only get to see the man sitting on the floor from the side, there are no front-on shots that would allow us to see the man’s face and ascertain whether or not he looks anything like bin Laden and there is no audio (apparently it was edited by the Pentagon). Again, this is very convenient, and I think you will agree that, even from the side-on angle, the man on the floor does not look like any of the images of the person we know to be the real bin Laden.

But the real smoking gun is to be found in the videos allegedly taken from the Pakistan ‘compound’ and which provide higher resolution images of a man who appears to be the same person that appeared in a ‘bin Laden’ video released in 2007.

Here’s a CNN report on the new videos.

And here’s the footage of the guy sitting on the floor.

I’ve taken a few screen shots of the ‘older’ ‘new’ videos of ‘Osama’ in his fancy duds, and I’d like to do a little nose, ear and shoulder comparison with images of the real bin Laden:

Here’s an image of the real bin Laden:

And here’s a screen shot from one of the ‘new’ videos from the above CNN report:

Is this the same person?

But here’s the real smoking gun that, in a sane world, would put an end to all of this CIA psy-ops nonsense: bin Laden’s left ear:

Here’s the offending ear in a new video that we are told was recovered from the ‘compound’:

A rather petite shell-like ear for a ‘terror mastermind’

And here it is on the real bin Laden:

As you can see, the real bin Laden has a pronounced deep and flattened helix (the top outer rim of the outer ear). Whereas the ‘new’ ‘bin Laden’ has a rather petite ear (quite the envy of all in the psy-ops division of the CIA I’d say).

In fact, both of the real bin Laden’s ears have this characteristic. Here’s the right one:

Right ear showing the same flattened helix
It’s pretty astounding that the CIA would be so cavalier as to release videos that can so easily be proven to feature someone other than the real Osama bin Laden. Then again, perhaps this is indicative of the contempt with which the CIA and US government consider the general US, and to a lesser extent world, public. I think we can safely assume that the US government and all of those behind the phony ‘war on terrorism’ (which is clearly a global war of imperial conquest) and the 9/11 attacks believe that there is little if anything that the public will not accept as long as it comes from official sources. So far, the public has done nothing to suggest that this belief is ill-founded.

In short, and once again, you are being sold a monstrous lie. And you can have no doubt that believing lies always carries consequences for the believers. The seriousness of the consequences depends on the seriousness of the lie. Given that the lie that is the official narrative of the ‘war on terror’ implicates the believers in the murder of 1.5 million Iraqi and Afghan citizens, 3,000 US citizens, the torture of thousands of innocent people and the destruction of civil liberties the world over, they may want to reconsider their position.