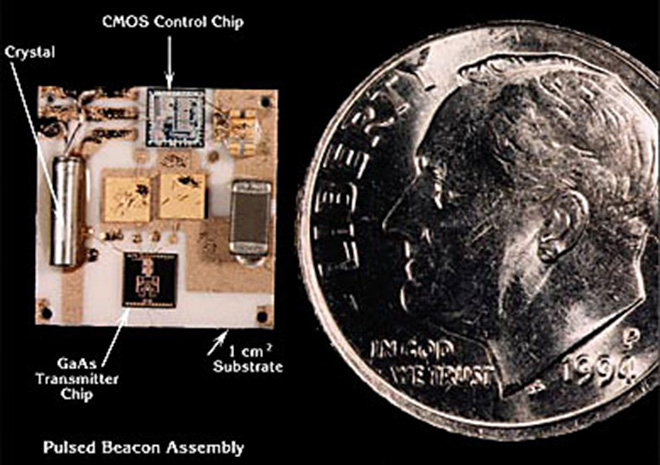 Scents that make you trackable, indoors and out. Nanocrystals that stick to your body, and light up on night-vision goggles. Miniradar that maps your location on Google Earth.

You can run, but you’ll learn it’s hard to hide from a new range of military tech.

The Defense Department calls it “tagging, tracking and locating,” or TTL, this business of finding and following high-value targets on the battlefield. Ever since SEAL Team 6 took out Osama bin Laden, we’ve learned a lot about the technology used by special operators to find and reach their targets, from stealth helicopters to biometric identification devices. TTL gear, though, ranks among the spookiest Special Operations’ extremely spooky arsenal.

The military has spent a hefty chunk of change on TTL tech: $450 million has gone to a single company, Blackbird Technologies of Herndon, Virginia, which has emerged as the leader in this covert field. Millions more have gone to the development of bleeding-edge tracking methods, encompassing everything from human-thermal-fingerprint detection and miniature crop-dusting drones to radar-responsive tags.

Al-Qaida says it found spies using infrared beacons to call in drone strikes in Pakistan. A Pakistani Taliban commander claims the United States puts tracking “chips” in cellphones, in order to train Hellfire missiles on militants. But these aren’t the only technologies that can to secretly track people.

With one technology, trackers might not even need to see you to get a fix on your location. Like bloodhounds on the hunt, they can smell their way to you. Tracer Detection Technology Corp. marks targets with a paraffin wax crayon, filled with a perfluorocarbon, a thermally-stable compound used in everything from refrigerators to cosmetics. The perfluorocarbon’s vapor can then be tracked with sensors, such as a gas chromatograph. The smell lingers for hours. Think locking yourself in a room with the windows closed or removing the tag will help? Too bad, you still reek. According to a research report submitted to the Justice Department (.pdf), the perfluorocarbon tracers can “permeate closed doors and windows, containers and luggage,” and even give you away for a while after a tagged item is removed.

Over the years, the company has received a number of research contracts from the Navy. But Tracer president  Jay Fraser won’t say much about how those projects have gone. “Tracer is developing a unique TTL capability that will make it very difficult for enemy and criminal enterprises to operate,” he e-mails Danger Room. “The nature of our current and pending customers makes it hard for us to answer the rest of your questions.”

Now a second tracer: Imagine walking up to a target and patting him on the back with a clear liquid on your hand. He might never notice it, but you’d be able to see — and follow — him from a distance using night vision goggles. Oregon-based Voxtel makes a product, “NightMarks,” that can do just that. NightMarks are tiny nanocrystal quantum dots that can be hidden in clear liquids and seen only through a sensor like night-vision goggles.

How do these tiny dots work? “You can change the optical properties of materials by making them small on the order of a nanometer in size,” Voxtel CEO George Williams tells Danger Room. “When they get down to that size, they have quantum-confinement effects that cause their absorption and emission properties — the light they absorb, the light they put out — to change,” he says. “And so using that, you can make all sorts of spectral barcodes that allow you to identify it and track.”

Williams is tight-lipped about Voxtel’s relationship with the Defense Department and the military applications of its technology. However, a quick look at one 2008 Voxtel contract with the Navy indicates that the Department already understands how useful the technology can be for tracking targets. The contract asks for “covert microtaggants composed of nanocrystals” visible through sensors like night-vision goggles to “enable war fighters the ability to track entities buried in urban clutter.”

Another company has proposed a somewhat counterintuitive solution for military tagging: making sure its signal decays. You might think that being able to see a taggant signal for as long as possible is always a good thing, but according to a briefing (.pdf) from TIAX LLC, it can actually be a problem.

Leftover taggants that last for long periods of time can apparently clutter up an area with signals, and the mess can hinder a tracker’s ability to distinguish between the subjects of new and old tags. If they’re still advertising their presence long after usefulness, opponents might also be able to find and reverse-engineer the material. To get around the problem, the briefing mentions that TIAX is working on “customizable degradable taggants” — exact composition unspecified — that will lose their signal over time.

Other technologies are useful in defensive tracking, such as for perimeter security on small firebases. SpotterRF, makes a small radar-sensor system, the SpotterRF M600, that’s about the size of a small netbook computer and can conveniently point out humans creeping up on your position on Google Earth. The M600 uses radio waves in the X band that can detect walkers up to 1,000 meters [0.62 miles] and vehicles as far away as 1,500 meters. It integrates with Google Earth by using its own built-in GPS to fix the device’s position and overlay tracked targets onto the mapping service.

The effect, a company rep e-mails, is “like being able to stick a GPS tracking device on someone without having to come anywhere near the person or vehicle.” It’s yet another way to hunt someone down who might not want to be hunted.

Oak Ridge National Laboratories developed this micro-miniature radio frequency transmitter (above). It’s smaller than a dime, and has a range of three kilometers [1.9 miles].