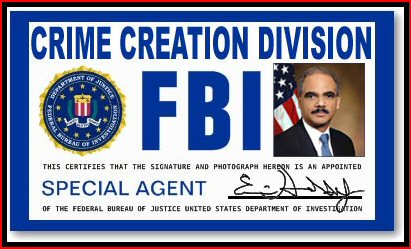 The Federal Bureau of Investigation employs upwards of 15,000 undercover agents today, ten times what they had on the roster back in 1975.

If you think that’s a few spies too many — spies earning as much as $100,000 per assignment — one doesn’t have to go too deep into their track record to see their accomplishments. Those agents are responsible for an overwhelming amount of terrorist stings that have stopped major domestic catastrophes in the vein of 9/11 from happening on American soil.

Another thing those agents are responsible for, however, is plotting those very schemes.

The FBI has in recent years used trained informants not just to snitch on suspected terrorists, but to set them up from the get-go. A recent report put together by Mother Jones and the Investigative Reporting Program at the University of California-Berkley analyses some striking statistics about the role of FBI informants in terrorism cases that the Bureau has targeted in the decade since the September 11 attacks.

The report reveals that the FBI regularly infiltrates communities where they suspect terrorist-minded individuals to be engaging with others. Regardless of their intentions, agents are sent in to converse within the community, find suspects that could potentially carry out “lone wolf” attacks and then, more or less, encourage them to do so. By providing weaponry, funds and a plan, FBI-directed agents will encourage otherwise-unwilling participants to plot out terrorist attacks, only to bust them before any events fully materialize.

Additionally, one former high-level FBI officials speaking to Mother Jones says that, for every informant officially employed by the bureau, up to three unofficial agents are working undercover.

The FBI has used those informants to set-up and thus shut-down several of the more high profile would-be attacks in recent years. The report reveals that the Washington DC Metro bombing plot, the New York City subway plot, the attempt to blow up Chicago’s Sears Tower and dozens more were all orchestrated by FBI agents. In fact, reads the report, only three of the more well-known terror plots of the last decade weren’t orchestrated by FBI-involved agents.

The report reveals that in many of the stings, important meetings between informants and the unknowing participants are left purposely unrecorded, as to avoid any entrapment charges that could cause the case to be dismissed. Perhaps the most high-profile of the FBI-proposed plots was the case of the Newburgh 4. Around an hour outside of New York City, an informant infiltrated a Muslim community and engaged four local men to carry out a series of attacks. Those men may have never actually carried out an attack, but once the informant offered them a plot and a pair of missiles, they agreed. Defense attorneys cried “entrapment,” but the men still were sentenced to 25 years apiece.

“The problem with the cases we’re talking about is that defendants would not have done anything if not kicked in the ass by government agents,” Martin Stolar tells Mother Jones. Stolar represented the suspect involved in a New York City bombing plot that was set-up by FBI agents. “They’re creating crimes to solve crimes so they can claim a victory in the war on terror.” For their part, the FBI says this method is a plan for “preemption,” “prevention” and “disruption.”

The report also reveals that, of the 500-plus prosecutions of terrorism-related cases they analyzed, nearly half of them involved the use of informants, many of whom worked for the FBI in exchange for money or to work off criminal charges. Of the 158 prosecutions carried out, 49 defendants participated in plots that agent provocateurs arranged on behalf of the FBI.

Experts note that the chance of winning a terrorism-related trial, entrapment or not, is near impossible. “The plots people are accused of being part of — attacking subway systems or trying to bomb a building — are so frightening that they can overwhelm a jury,” David Cole, a Georgetown University law professor, tells Mother Jones. Since 9/11, almost two-thirds of the cases linked to terrorism have ended with guilty pleas. “They don’t say, ‘I’ve been entrapped,’ or, ‘I was immature,’” a retired FBI official remarks.

All of this and those guilty pleas often stem for just being in the right place at the wrong time. Farhana Khera of the group Muslim Advocate notes that agents go into mosques on “fishing expeditions” just to see where they can get interest in the community. “The FBI is now telling agents they can go into houses of worship without probable cause,” says Khera. “That raises serious constitutional issues.”

From the set-up to the big finish, the whole sting operation is ripe with constitutional issues such as that. A decade since 9/11, however, the FBI is reaching through whatever means it can pull together to keep terrorists — or whom they think could someday become one — from ever hurting America.