He Served the Empire Abroad; The Regime Killed Him in His Home 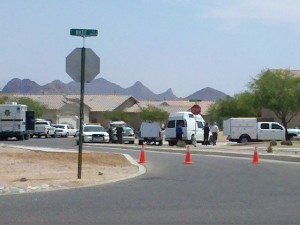 Jose Guerena survived two combat tours of Iraq, only to become a casualty of the Regime’s longest war — the one waged against its domestic subjects in the name of drug prohibition. The former Marine was slaughtered by a SWAT team during a May 5 assault on his home in Arizona.

Guerena’s wife, Vanessa, heard a noise outside the couple’s home near Tucson at about 9 a.m. Jose, who had just gone to bed after pulling a 12-hour shift at the Asarco Mine, suspected — correctly, as it turned out — that his family was threatened by an armed criminal gang. Grabbing his AR-15, Guerena instructed his wife and four-year-old son to hide in the closet while he confronted the intruders. According to Mrs. Guerena, the stormtroopers from the Pima County Regional SWAT team never identified themselves as police; they simply stormed into the home and started shooting.

“A deputy’s bullet struck the side of the doorway, causing chips of wood to fall on his shield,” recounts the Arizona Daily Star, paraphrasing an account provided by Pima County Sheriff’s Office (PCSO) functionary Michael O’Connor. “That prompted some members of the team to think the deputy had been shot.” Guerna never fired a shot; the marauders who invaded his home fired no fewer than seventy-one. As is standard procedure in such events, the invaders claimed that Guerna had fired on the officers, as he had every moral and legal right to.

Neither Jose nor his wife had a criminal history of any kind. The attack on their home was described as a narcotics enforcement operation, but there are no reports that narcotics were found at the residence – – even though the invaders reportedly “seized” (that is, stole) something that belonged to the victim.

“Tucson is notorious for home invasions and we didn’t want it to look like that,” insisted PCSO spokesman O’Connor, exhibiting the dull-witted refusal to acknowledge the obvious that typifies tax-feeders of his station. He also maintained that the death squad “went lights and sirens and we absolutely did not do a `no-knock’ warrant,” a claim refuted by the only surviving witness, Vanessa Guerena. Such details are morally inconsequential, since there was no reason — apart from the institutional vanity of the PCSO and the indecent eagerness of the armored adolescents who compose its SWAT team — to conduct a paramilitary raid to serve a routine search warrant.

“I never imagined I would lose him like that, he was badly injured but I never thought he could be killed by police after he served his country,” lamented the wife of the murdered ex-Marine, who died on his feet, a rifle in his hand, and  his face to an unexpected enemy.  The grim but unavoidable truth is this: We shouldn’t be at all  surprised that a Regime capable of sending Americans abroad to terrorize Iraqis in their homes would employ the same state terrorism against Americans here at home.