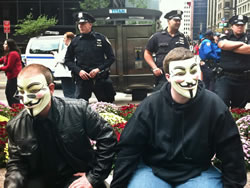 Even people who were indifferent about Occupy Wall Street protests are getting steamed about the violent crackdown on peaceful protesters because this is STILL the USA where American citizens have the Right to Assemble and the Right to Free Speech. IF the correct permits were not obtained, does that give NYPD the right to beat or mace peaceful protesters? Is America the new KGB police state, now officially being running by the rich and the Department of Fear? Citizen media is NOT a crime!

Despite horrifying videos of white-collar NYPD officers violently attacking peaceful protesters and photos of excessive violence and police brutality, this is still the USA where American citizens have a right to Freedom of Speech. As TechHerald reported, “if it bleeds, it leads” and everything changed on Saturday when something evil was in the air, blood was running down faces, and the fear department like Cold War KGB took over Wall Street. The NYPD used exceedingly violent tactics against peaceful protesters which earned the title of “The Arab Spring of The United States.” This weekend, the NYPD responded to thousands of people who showed up for Occupy Wall Street with “police state” measures.

Technology is shaping the events of Occupy Wall Street; last week Yahoo apologized for “accidentally” blocking anti-Wall Street protest emails. But still there was a mainstream media coverage blackout. Police, armed with cell phones, cameras and batons, are recording citizens; protesters are recording police; and the scene is set for facial recognition technology and potential police state surveillance as seen on Cryptome. NYPD is claiming technology via the tweaking of videos is what makes the police look bad, not actual police actions. As some protesters chanted, “Shame. Shame,” so do I call disputing that the hundreds of videos and photos from different angles could all have been altered.

On Saturday, police carried an orange mesh fencing through Union Square to corral protesters onto the sidewalks. My blood turned cold when I watched a video of a peaceful female protester screaming in pain after being sprayed by a white-collared police officer. The “macing of innocent women” tactic was called common ground between American and Iranian officials. The New York Times reported, “There were approximately 80 arrests, mainly for disorderly conduct by individuals who blocked vehicular and pedestrian traffic, but also for resisting arrest, obstructing governmental administration and, in one instance, for assault on a police officer.”

Alternet reported, “Police sprayed peaceful protesters in the face with pepper spray, threw them to the ground and assaulted them with elbows, dragged a woman around by the hair, jumped over barricades to grab and rough up young people, and, when all was said and done, laughed to themselves triumphantly. This is exactly the sort of violence and brutality American authorities routinely condemn when perpetrated against non-violent civilians demonstrating for democracy in Middle Eastern dictatorships, even as they employ horrifying cruelty right here.”

According to Metro, NYPD Deputy Commissioner Paul Browne defended the decision to use pepper spray and blamed people for editing Occupy Wall Street videos to make the police look bad. Browne said, “Pepper spray was used once after individuals confronted officers and tried to prevent them from deploying a mesh barrier — something that was edited out or otherwise not captured on the video.” Then Browne warned, “Those who resist arrest can expect some measure of force will used.”

What’s next? Announcing citizen media is a crime?

There are good cops and bad cops, and you can see the difference between them as some of the NYPD in blue officers’ faces reflected shock and horror at violence displayed by their white-collared counterparts. Do you think the Occupy Wall Street 99% is only representing young Americans? An interview of one police-attacked-woman included her statement, “I’m here for my grandparents, who are too old to protest.”

A comment on the ABC article pointed out that the police may wield tasers and mace, but as was seen after the London riots, technology will be used to identify protesters.

Given the number of police holding video cameras, this is obviously a way to intimidate people who may think about joining a peaceful protest (not merely to “gather evidence” as police will claim). Of course NYPD is big on facial recognition technology, so people who might want to exercise their 1st Amendment RIGHTS are entered in a database for whatever purpose our “watchers” deem fit.

First reported as Homeland Security personnel then reported as Marines, there were allegedly over “100 Chemical and Biological Response Units stationed all around Liberty Park.” Another photo showed a member of the unit perhaps taunting Anon by wearing an Anonymous mask after images such as the one snapped by Andrew Shiue was seen on Public Intelligence.

Again technology comes into play by live streaming of Occupy Wall Street and other information. For the record, I do not support the release of innocent people’s information, yet some techy folks are turning the technology surveillance around and hunting for the real name of “Officer Derp,” by showing an older photo from 2004 GOP Convention and again as well as a Pastebin doxing of the alleged real name for the NYPD Deputy Inspector as well as the reasons behind it. Then came numerous warning tweets, including this one, “Fair Warning, your attack on Inspector Bologna will prove you are terrorists! Badge shows 9/11 Hero, you show HAMAS!”

Technology like tweets and social networking definitely is playing a part in Occupy Wall Street . . . as is biometric tech in the form of retina scanning of detained protesters.

The terrorism-meets-technology theme was mentioned again. Another article mentions that the NYPD’s “state-of-the-art anti-terrorism system” for the last four years has included a weapon that could “bring down a rogue aircraft” and the “bullets can penetrate concrete cinder blocks.”

Even people who were indifferent about the Wall Street protests are getting steamed about the violent crackdown on peaceful protesters because this is still the USA where American citizens have the Right to Assemble and the Right to Free Speech. IF the correct permits were not obtained, does that give NYPD the right to beat or mace peaceful protesters? Judge for yourself via firsthand accounts of people from the front lines and video interviews taken in Liberty Plaza and posted as a message on Day Nine of Occupy Wall Street. It’s very scary, like Free Speech Zones in America are now run by the Department of Fear. If you see it, report NYPD misconduct.