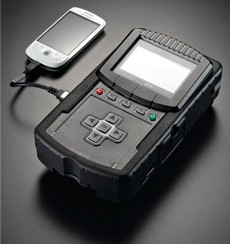 Michigan state police (or should we say police state?) have been using a handheld mobile forensics device to steal information from cell phones belonging to motorists stopped for minor traffic violations. The high-tech device works with 3000 different phone models and can bypass passwords to process “Complete extraction of existing, hidden, and deleted phone data, including call history, text messages, contacts, images, and geotags,” according to CelleBrite, the company behind the device. “The Physical Analyzer allows visualization of both existing and deleted locations on Google Earth. In addition, location information from GPS devices and image geotags can be mapped on Google Maps.”

So, without a warrant, without people even knowing it, police has the power to look into your entire phone’s memory, including deleted phone data. With geotags, it can retrace pretty much everywhere you’ve went with that cellphone. Since most people have their cellphones at less than 5 feet from them at all times, well, there you go.

The Michigan State Police have a high-tech mobile forensics device that can be used to extract information from cell phones belonging to motorists stopped for minor traffic violations. The American Civil Liberties Union (ACLU) of Michigan last Wednesday demanded that state officials stop stonewalling freedom of information requests for information on the program.

ACLU learned that the police had acquired the cell phone scanning devices and in August 2008 filed an official request for records on the program, including logs of how the devices were used. The state police responded by saying they would provide the information only in return for a payment of $544,680. The ACLU found the charge outrageous.

“Law enforcement officers are known, on occasion, to encourage citizens to cooperate if they have nothing to hide,” ACLU staff attorney Mark P. Fancher wrote. “No less should be expected of law enforcement, and the Michigan State Police should be willing to assuage concerns that these powerful extraction devices are being used illegally by honoring our requests for cooperation and disclosure.”

A US Department of Justice test of the CelleBrite UFED used by Michigan police found the device could grab all of the photos and video off of an iPhone within one-and-a-half minutes. The device works with 3000 different phone models and can even defeat password protections.

“Complete extraction of existing, hidden, and deleted phone data, including call history, text messages, contacts, images, and geotags,” a CelleBrite brochure explains regarding the device’s capabilities. “The Physical Analyzer allows visualization of both existing and deleted locations on Google Earth. In addition, location information from GPS devices and image geotags can be mapped on Google Maps.”

The ACLU is concerned that these powerful capabilities are being quietly used to bypass Fourth Amendment protections against unreasonable searches.

“With certain exceptions that do not apply here, a search cannot occur without a warrant in which a judicial officer determines that there is probable cause to believe that the search will yield evidence of criminal activity,” Fancher wrote. “A device that allows immediate, surreptitious intrusion into private data creates enormous risks that troopers will ignore these requirements to the detriment of the constitutional rights of persons whose cell phones are searched.”

The national ACLU is currently suing the Department of Homeland Security for its policy of warrantless electronic searches of laptops and cell phones belonging to people entering the country who are not suspected of committing any crime.