Missing Iraq money may be as much as $18 billion 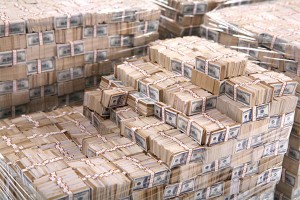 In 2004, the Bush administration flew twenty billion dollars of shrink-wrapped cash into Iraq on pallets. Now the bulk of that money has disappeared. The funds flown into the war zone were made up of surplus from the UN’s oil-for-food program, as well as money from sales of Iraqi oil and seized Iraqi assets. Recent estimates had the amount of missing money at about $6.6 billion, but according to Al Jazeera, Iraqi Parliament Speaker Osama al-Nujaifi says the figure is closer to three times that amount.

Officials were supposed to distribute the money to Iraqi government ministries and U.S. contractors tasked with the reconstruction of Iraq, but it now appears that the bulk of the cash was stolen in what may be one of the largest heists in history.

The Iraqi government argues that U.S. forces were supposed to safeguard the cash under a 2004 agreement, making Washington responsible for the money’s disappearance. Pentagon officials claim that given time to track down the records they can account for all of the money, but the U.S. has already audited the money three times and no trace of what happened to it can be found.

Al Jazeera says that it has been unable to find any documents whatsoever accounting for the money’s disappearance. Some believe that U.S. officials absconded with the money, but it’s more likely, sources say, that corrupt Iraqi officials used the funds to line their own pockets.

To date, it’s estimated that the Iraq War has cost the United States more than a trillion dollars.