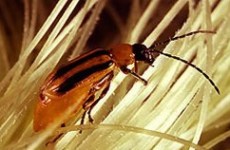 Nature herself may be the best opponent of genetically modified crops and pesticides.  Not only plants, but insects are also developing resistance.  The Western rootworm beetle – one of the most serious threats to corn – has developed resistance to Monsanto’s Bt-corn, and entire crops are being lost.

Bacillus thuringiensis – Bt – is a bacterium that kills insects.  Different proteins are engineered into cotton as well as corn plants.

Two-thirds of all US corn is genetically modified per the USDA, and the bulk of that is Bt-corn. Monsanto has the biggest market share in the US, reporting about 35% in 2009.

In response to the July 2011 study, Monsanto said only the “YieldGard® VT Triple and Genuity® VT Triple PRO™ corn products” are affected.

“It appears he has demonstrated a difference in survival in the lab, but it is too early to tell whether there are implications for growers in the field.”

However, Kansas State researchers summarized the study, indicating that the specimens tested came from fields suffering severe rootworm damage and compared them to those from unaffected fields.  In other words, it was a field study.

Resistance developed where the same Bt corn had been grown at least three years in a row.  Gassmann found “a significant positive correlation between the number of years Cry3Bb1 maize had been grown in a field and the survival of rootworm populations on Cry3Bb1 maize in bioassays.”

Ag Professional’s Colleen Scherer explains that “the Cry3Bb1 toxin is the major one deployed against rootworms. There is no ‘putting the genie back in the bottle,’ and resistance in these areas is a problem that won’t go away.”

Monsanto urges farmers to try their “stacked” GM products where more than one trait is engineered and to employ integrated pest management (IPM) techniques.

Kind of like getting on a treadmill of ever increasing DNA manipulation and chemicals to maintain monocultures, instead of reverting to time-honored mixed farms that use companion plants (including weeds) for pest control. IPM does not have to include toxic chemicals or genetic manipulation for success.  (See, e.g., Sepp Holzer’s Permaculture).

This year, Monsanto launched a “triple-stack” sweet corn which it envisions being sold at Farmers Markets.  The FDA’s GMO label ban will certainly help, since most people who buy local are specifically trying to avoid genetically engineered foods.

In line with Monsanto’s goal to enter farmers markets, the Union of Concerned Scientists just came out with a report urging federal financial support in order to create jobs. The report notes that the number of farmers markets has doubled in the past ten years.

But, as we watch the feds target natural producers with raids and product seizure, while leaving Cargill’s 36 million pounds of tainted turkey alone until someone died, we can expect that any federal money put toward farmers markets will be used to support only that produce which is genetically modified, chemically doused and/or irradiated.

Click here to follow Iowa State’s work on the rootworm, and see the following pieces for more reasons to avoid herbicides and biotech foods:

The Legislation That Could Kill Internet Privacy for Good