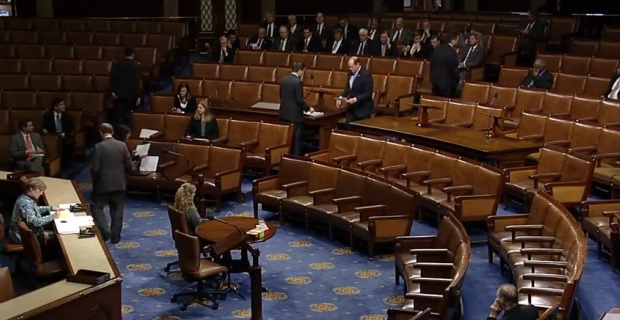 This is a clear representation that the United States’ ELECTED officials care nothing for the Constitution and what it stands for.  They are most likely embarrassed or ashamed of their stance on these relevant issues due to pay-offs, blackmail, insider stock trading, and their central banking ‘handlers’ that motivate them to stay silent on these most important issues. For them, it is easier to bury their heads in the sand, and pretend that this doesn’t require their input nor action.   -Max Maverick, DCMX Editor

In what was supposed to be a symbolic gesture of the enduring greatness of the US Constitution, and the rights it outlines for all Americans, the House read the entire document out aloud on the chamber floor yesterday. However, the symbolism backfired somewhat when only a fraction of representatives bothered to show up.

In the midst of the Obama administration’s ongoing efforts to eviscerate the Second Amendment by executive order, it was extremely telling that so few members of the House took the time to show their respect for the Constitution.

The document was divided into 120 sections, with GOP House leaders believing that at least that many members would show up to each read a section.

When all was said and done, however, only 74 members attended. The Washington Times notes that the House ran out of Democrats before they even got past Article IV, which is less than halfway through the document.

Just 25 Democrats valued the idea enough to turn up for the reading, while a meager 49 Republicans attended. This meant that each reader had to take two or three sections.

The entire reading took around 66 minutes.

During the Preamble to the reading, Virginia Republican Bob Goodlatte, who organised the event, stated “We also hope that this will demonstrate to the American people that the House of Representatives is dedicated to the Constitution and the system it establishes for limited government and the protection of individual liberty.”

When two Democrats shuffled in as the final reader was speaking, Goodlatte attempted to put a brave face on the situation, stating “We ran out of Constitution before we ran out of readers,”.

The Times also notes that Minority Leader Nancy Pelosi seemed embarrassed that so few Democrats showed up, at one point she “gestured with a shrug to the nearly empty chamber”. Her Republican counterpart, Speaker of the House John Boehner was initially present but left before the end of the reading and did not take part.

The Second Amendment was read by Rep. Kevin Yoder, R-Kan., who also read the First and Third Amendments.

This was only the second time that the Constitution has been read in its entirety, without sections that were amended after the document was ratified in September 1787.

The first occasion was just two years ago, when 137 lawmakers attended.

It is to be expected that some members cannot always be present on the House floor, but with 435 representatives having sworn an oath to uphold the Constitution, it is pitiful, and a very telling sign of the times, that only around one sixth cared enough to participate in reading out the founding document.

And Congress’ Rich Get Richer

Net Worth of Lawmakers Up 25 Percent in Two Years, Analysis Demonstrates

Members of Congress had a collective net worth of more than $2 billion in 2010, a nearly 25 percent increase over the 2008 total, according to a Roll Call analysis of Members’ financial disclosure forms.

Nearly 90 percent of that increase is concentrated in the 50 richest Members of Congress.

According to financial disclosure forms filed by Members of Congress this year, the minimum net worth in the House has jumped to $1.26 billion, and Senate net worth has climbed to at least $784 million, for a Congressional total of $2.04 billion.

These wealth totals vastly underestimate the actual net worth of Members of Congress because they are based on an accounting system that does not include homes and other non-income-generating property, which is likely to tally hundreds of millions of uncounted dollars. In addition, Roll Call’s tally is based on the minimum values of assets reported by Members on their annual financial disclosure forms; the true values of those assets may be much higher.

And as protesters around the country decry the supposed consolidation of wealth in America, the trend can be seen starkly in Congress, a comparison suggested by American Enterprise Institute visiting scholar Mark Perry. The 50 richest Members of Congress accounted for 78 percent of the net worth in the institution in 2008 ($1.29 billion of the $1.65 billion total); by 2010 the share of the 50 richest had risen to 80 percent ($1.63 billion of the $2.04 billion total). The pie of Congressional wealth got bigger, and the richest Members are getting a bigger slice.

But there is still plenty to go around. Overall, 219 Members of Congress reported having assets worth more than $1 million last year; subtracting the minimum value of their liabilities brings the total number of millionaires in Congress down to 196 — again not counting any value on their homes or other non-income-producing property. If one were to assume that every Member of Congress has $200,000 worth of equity in real estate, the total number of millionaires would rise to 220 Members, just more than 40 percent of the Congress.

As with the general U.S. population, a few exceedingly wealthy people skew the averages for the rest of the membership. But still, by almost any measure, the average Member of Congress is far wealthier than the average U.S. household.

For example, dividing the total wealth of Congress by the number of Members creates a mean (average) net worth for each Member of about $3.8 million (excluding non-income-producing property such as personal residences). By comparison, for the rest of the country, based on statistics released by the Federal Reserve, average household net worth is around $500,000 this year (including personal residences), according to David Rosnick, an economist at the Center for Economic and Policy Research.

But a handful of Members of Congress are worth tens or even hundreds of millions of dollars — the richest Member of Congress this year, Rep. Michael McCaul (R-Texas), is worth a minimum of $294 million, meaning that McCaul’s own wealth has the effect of raising the average of every Member of Congress by about $500,000.

While it is hard to make an exact comparison between Congress and the rest of the nation, what is clear is lawmakers “are all a lot richer than anything you would call a typical American,” Rosnick said.

And Congress appears to be getting richer faster than the rest of the nation. Citing Federal Reserve data, Rosnick said, “From the end of 2008 to end of 2010, aggregate household worth increased
12 percent.” That is about half the increase Congress achieved during the same time period.

The cautionary note in any Congressional wealth analysis is that significant changes in apparent wealth of Members do not necessarily represent an actual change in net worth.

For example, Rep. Darrell Issa reported this year that his 2010 assets were worth at least $295 million, nearly double what they were the year before. The reason for the change appears to be in part because the California Republican moved some properties from a single account into separate accounts. An account that Issa had listed as having a minimum value of $50 million in 2009 dropped to a minimum value of $25 million in 2010, but he added 11 accounts with a minimum combined value of $38.2 million. Even if none of the actual account (or property) values increased, the minimum value of those assets on paper rises by $13.2 million, or more than 25 percent.

Alan Ziobrowski, a professor of real estate at Georgia State University, has produced studies of Congressional investment patterns indicating that lawmakers in both chambers tend to fare better in their investment portfolios than the average American, in part because “[t]here is no doubt in my mind that they are trading in some way on information that is there.”

But he also points out that the Membership of Congress has turned over since 2008, making it difficult to compare wealth over time. “You’ve got different people,” he said.