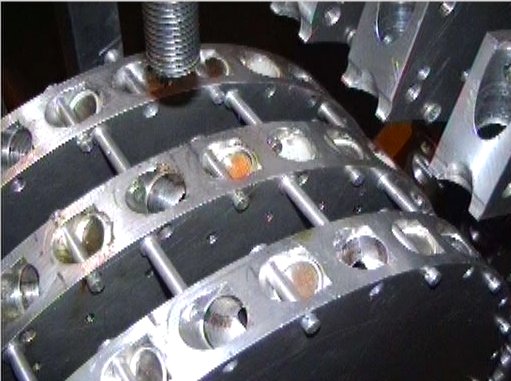 An inventor from Argentina has posted a video showing a prototype motor that is claimed to produce more power than it consumes. A video he has posted demonstrates the device in action, and seems to show there are no obvious hidden power sources.

Many inventors have built various types of magnet motors over the years. Some have been purely permanent magnet systems, and others have incorporated both permanent magnets and electromagnets. The fascination with these motors seems to be their potential to produce “free energy” from magnetic fields. When you see a magnet on a refrigerator door holding quite a bit of weight, even though no “work” is being done (the definition of “work” requires movement), a lot of force is represented. What if you could harness that force somehow into a rotational system?

This inventor has setup a blog http://torianproyect.blogspot.com/ about his efforts, which he calls the “Torian Project.” His prototype magnet motor is named the “Torian III.” The prototype features three circular, stationary stators with permanent magnets embedded in them. A rotor that is free to spin fits inside each of the circular stators. The first stator appears to have a number of coils attached, which may be used to influence the permanent magnets (the whole device may be some type of pulse motor). The device is started when the inventor manually spins a wheel on the far left side of the device. Apparently, this manual input is enough to start the device, which then seems to self sustain — and produce enough extra power to light some LEDs. Near the end of the video, he lifts up the device off the table it is on, and shows there are no hidden wires attached.

The inventor speaks Spanish in the video. Also, the written comments he provides with the video are a bit confusing. This is obviously due to the language barrier that can hopefully be overcome with the help of PESN’s readership.

[September 13 update: A translation of this video, along with a subsequent video that was made has been posted at PESWiki.]

Here is the video and the comments that he provides.

In this opportunity, I would like to show you a completely magnetic motor. This kind of motor DOES NOT need to be supply by any kind of battery, or electrical net or solar energy, because it uses his own alimentation by spinning. And, at the same time, can generates extra electric current (as we can see, the led lights connected to the motor are on).

The principle is easy to understand. All the motors have one rotor and one stator, but in this motor, we have three neodymium discs (instead of a rotor) and two neodymium rings (instead of a stator) and one last neodymium ring that functions as a magnetic oscillator, self-excited by a stage of captors. This captors commutes the magnet’s polarities.

This very same principle its now being use in our last prototype: 1 HP (600 W free). We will upload as soon as possible an explication video for the HP.

There is not a lot of additional information about this device or the inventor. So far, his name has not been revealed. Also, the video he posted is the only one that has been uploaded to his YouTube account. Unfortunately, very little information has been added to his blog, which he has only posted to once. The blog only provides a link to the YouTube video, and features almost the exact same text that he posted with the video.

Thankfully, he has provided an email address for those who would like to contact him. [email protected]

As time passes, hopefully we can learn more about this device, how it works, and it’s performance. It would be great to have another party test it, to determine if it is really producing more power than it consumes. Of course it is possible such testing has already been done, and we just don’t know about it.

There is an expired Brazilian patent that definitely is relevant here, from which the Perendev all-magnet motor was almost surely pirated.  It was granted in 1989 based on a working motor that was presented to the Brazilian patent office.  Using ceramic magnets, it degaussed rapidly, and because the cost of the magnets and the ridicule heaped on him, the inventor shelved the project.  The inventor does not want to be contacted.

In a year when cold fusion technology, noble gas engines, solid state generators, and other devices are emerging, it is nice to know that the classic overunity magnet motors are still alive and kicking!

This story is also published at BeforeItsNews.

What You Can Do