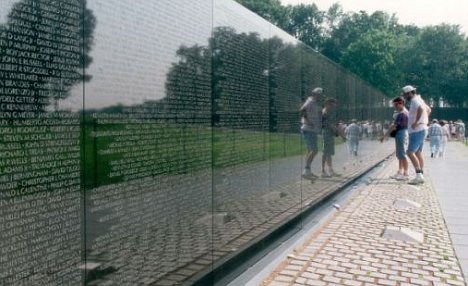 Prominent Washington aide John Wheeler was assassinated by a hitman in a targeted killing, his widow has claimed.

Katherine Klyce said the way her late husband’s body was dumped at a landfill site could only have been carried out by a professional.

The 66-year-old suggested his work with the Pentagon over his decades-long career could have made him enemies who wanted rid of him.

She also attacked the police investigation into his death and claimed it hard ‘made her life miserable’.

Officers have confiscated personal items including credit cards and strange charges have been appearing on them in recent weeks including two flights worth $3,000, she said.

The body of Mr Wheeler, 66, a former Army officer who was instrumental in building the iconic Vietnam Veterans Memorial wall in Washington DC, was discovered on a landfill in Wilmington, Delaware, on New Year’s Eve.

Career: He had been special assistant to the Secretary of the Air Force during the presidency of George W Bush and had worked for two other former presidents

A Harvard and Yale graduate, he had served as a military advisor to three presidents and lived in New Castle with his wife, a silk importer.

Landfill workers found him on New Year’s Eve when a garbage truck containing his body completed its run at the Cherry Island landfill and threw his body out.

He had been put into a commercial dumpster in Newark, Delaware, about
12 miles from his home and 15 miles from Wilmington, where it was picked up by a garbage truck and taken to the landfill site.

Confused: Mr Wheeler was caught on a security camera at a Delaware car park booth just two days before his body was found in a nearby landfill

Disorientated: As he spoke to the attendant in the car park he seemed confused and appeared to be stumbling around

Ms Klyce told Slate.com: ‘I think perhaps no one has been on the reward because they’ve already been paid.

‘The way they disposed of his body, it’s a miracle anybody ever found it. That just sounds like a pro to me.’

Turning to the police she said they had been ‘so bad’ and ‘made my life miserable’.
After Mr Wheeler’s death, the whole family went to Newark police station for interrogation.

Crime scene: He had been put into a commercial dumpster about 12 miles from his home where it was picked up by a garbage truck and taken to the landfill site

‘They treated us like criminals, all of us. They were rude,’ she said. ‘They just don’t have a clue. I think they wish it would all just go away.’

The two flights on her credit card were from New York to Madrid totalling $3,000. It is not clear if these were made by any police officers or by a third party.

Thomas McInerney, a retired Air Force officer, agreed that Mr Wheeler could have made some powerful enemies during his career.

Legacy: Mr Wheeler was instrumental in the approval and construction of the Vietnam Veterans Memorial wall in Washington DC, which includes more than 58,000 names of servicemen who died in the conflict

‘A man with that experience, it could have been foul play to get some of the secrets he had,’ he said.

Detectives are still clueless as to how Mr Wheeler died but they have turned their attentions towards an ongoing row with his neighbour Frank Marini over his ongoing project to build a home next to theirs.

Mr Wheeler reportedly tried to stop the plans in court and said that the house was too big for the area.

Delaware police have admitted that a smoke bomb was placed under the same neighbour’s house last week but have not released any more details.

Mr Wheeler had been special assistant to the Secretary of the Air Force during the presidency of George W Bush.

While working at the Pentagon Mr Wheeler wrote a manual on the effectiveness of biological and chemical weapons and recommended that the US should not use biological warfare.

Although critics initially blasted the design of the Vietnam memorial, which he was instrumental in creating, it has become one of Washington’s most visited sites since its unveiling in 1982.

Wikileaks: Corrupted Oracle or a Cointelpro Asset of the Establishment?