Police Departments Retaliate Against Organized “Cop Watch” Groups Across the US 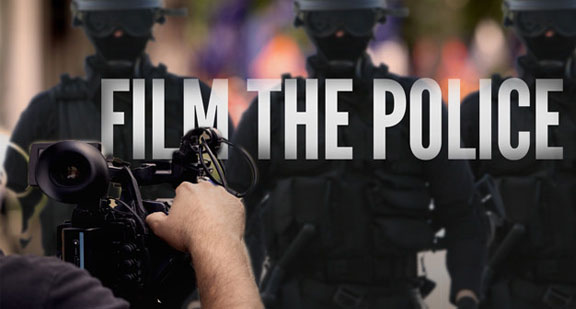 When communities attempt to police the police, they often get, well… policed.

In several states, organized groups that use police scanners and knowledge of checkpoints to collectively monitor police activities by legally and peacefully filming cops on duty have said they’ve experienced retaliation, including unjustified detainment and arrests as well as police intimidation.

The groups operate under many decentralized organizations, most notably CopWatch and Cop Block, and have proliferated across the United States in the last decade – and especially in the aftermath of the events that continue to unfold in Ferguson, Missouri, after officer Darren Wilson fatally shot unarmed, black teenager Michael Brown.

Many such groups have begun proactively patrolling their communities with cameras at various times during the week, rather than reactively turning on their cameras when police enter into their neighborhoods or when they happen to be around police activity.

Across the nation, local police departments are responding to organized cop watching patrols by targeting perceived leaders, making arrests, threatening arrests, yanking cameras out of hands and even labeling particular groups “domestic extremist” organizations and part of the sovereign citizens movement – the activities of which the FBI classifies as domestic terrorism.

Courts across the nation at all levels have upheld the right to film police activity. The American Civil Liberties Union (ACLU) and photographer’s associcationshave taken many similar incidents to court, consistently winning cases over the years. The Supreme Court has ruled police can’t search an individual’s cellphone data without a warrant. Police also can’t legally delete an individual’s photos or video images under any circumstances.

“Yet, a continuing stream of these incidents (often driven by police who have been fed ‘nonsense‘ about links between photography and terrorism) makes it clear that the problem is not going away,” writes Jay Stanley, a senior policy analyst at the ACLU’s Speech, Privacy & Technology Project.

Sources who have participated in various organized cop watching groups in cities such as New York; Chicago; Cleveland; Las Vegas; Oakland; Arlington, Texas; Austin and lastly Ferguson, Missouri, told Truthout they have experienced a range of police intimidation tactics, some of which have been caught on film. Cop watchers told Truthout they have been arrested in several states, including Texas, New York, Ohio and California in retaliation for their filming activity.

More recently, in September, three cop watchers were arrested while monitoring police activity during a traffic stop in Arlington, Texas. A group of about 20 people, a few of them associated with the Tarrant County Peaceful Streets Project, gathered at the intersection of South Cooper Street and Lynda Lane during a Saturday night on September 6 to film police as they conducted a traffic stop. A video of what happened next was posted at YouTube.

Arlington police charged Janie Lucero, her husband, Kory Watkins, and Joseph Tye with interference of public duties. Lucero and Watkins were charged with obstructing a highway while Tye was arrested on charges of refusing to identify himself.

Arlington police have defended the arrests of the three cop watchers, but the watchers say they weren’t interfering with police work, and were told to move 150 feet away from the officers – around the corner of a building where they couldn’t film the officers.

“When we first started [cop watching, the police] seemed kind of bothered a little bit,” Watkins told Truthout. “There was a change somewhere where [the police] started becoming a little bit more offended, and we started having more cop watchers so I guess they felt like they needed to start bringing more officers to traffic stops.”

On the night of Watkin’s arrest, his group had previously monitored two other traffic stops without any confrontation with Arlington police officers before the incident that led to the arrests.

As he began photographing the officers and asking questions about their activities, the cops assaulted and arrested him. He was charged with spitting in a cop’s face – a felony crime.

However, two witness videos of the incident surfaced and neither of them showed that Buehler spit in Officer Patrick Oborski’s face. A grand jury was finally convened in March 2013 and concluded there was not enough evidence to indict Buehler on any of the crimes he was charged with.

Since the PSP was launched, the movement has grown, with local chapters popping up in other cities and states across the United States, including Texas’ Tarrant County chapter, which the three cop watchers arrested in Arlington were affiliated with.

But as the Peaceful Streets movement spread, police retaliation against the groups, and particularly Buehler himself, also escalated.

“[The Austin Police Department (APD)] sees us as a threat primarily because we shine a spotlight on their crimes,” Buehler said.

The group recently obtained documents from the APD through a Freedom of Information Act (FOIA) request that reveal Austin police colluded to arrest Buehler and other cop watchers affiliated with the Peaceful Streets Project. Since the New Year’s Day incident, Buehler has been arrested three more times by APD officers. At least four other members of PSP have been arrested on charges of interference or failing to identify themselves during their cop watching activities.

The emails indicate APD officers monitored Buehler’s social media posts and attempted to justify arresting him for another felony crime of online impersonation over an obviously satirical post he made on Facebook, as well as reveal that some APD officers coordinated efforts to stop PSP members’ legal and peaceful activities, even suggesting reaching out to the District Attorney’s office to see if anything could be done to incarcerate members of the group.

Another internal email from APD senior officer Justin Berry identifies PSP as a “domestic extremist” organization. Berry writes that he believes police accountability groups including PSP, CopWatch and Cop Block are part of a “national domestic extremism trend.” He believes he found “mirror warning signs” in “FBI intel.” Berry makes a strange attempt to lump police accountability activists and the hacker-collective Anonymous in with sovereign citizens groups as a collective revolutionary movement.

Buehler told Truthout the APD is working with a Department of Homeland Security (DHS) fusion center to attempt to identify PSP as a sovereign citizens group to associate its members with domestic terrorism with state and federal authorities. DHS fusion centers are designed to gather, analyze and promote the sharing of intelligence information between federal and state agencies.

“They have spent a fair amount of resources tracking us, spying on us and infiltrating our group, and we are just peaceful activists who are demanding accountability for the police,” Buehler told Truthout. “They have absolutely no evidence that we’ve engaged in any criminal activity or that we’ve tried to engage in criminal activity.”

APD officials did not respond to a request for comment.

“They’ve pushed us; they’ve assaulted us for filming them; they’ve used their horses against us and tried to run us into walls; they’ve driven their cars up on us; they illegally detained us and searched us; they get in our face and they yell at us; they threaten to use violent force against us,” Buehler said. “But we didn’t realize until these emails just how deep this intimidation, how deep these efforts were to harm us for trying to hold them accountable.”

Buehler also said the group has additional internal emails which have not been released yet that reveal the APD attempted to take another charge to the District Attorney against him for felony child endangerment over the activities of a teenaged member of PSP.

He said he and other members of PSP were interested in pursuing a joint civil action against the APD over their attempts to frame and arrest them for their First Amendment activities.

This is not the first time a municipal police department has labeled a local cop watching group as an extremist organization.

In 2002, internal files from the Denver Police Department’s (DPD) Intelligence Unit were leaked to the ACLU, revealing the unit had been spying on several activist groups in the city, and keeping extensive records about members of the activist groups. Many of these groups were branded as “criminal extremist” organizations in what later became a full-scale controversy widely known as the Denver police’s “spy files.” Some of the groups falsely branded as “criminal extremist” groups included three police accountability organizations: Denver CopWatch, End the Politics of Cruelty and Justice for Mena.

Again, from October 2003 through the Republican National Convention (RNC) in August 2004, intelligence digests produced by the New York City Police Department (NYPD) on dozens of activist groups, including several police accountability organizations, were made public under a federal court order. TheNYPD labeled participants of the “Operation CopWatch” effort as criminal extremists.

Those who participated in “Operation CopWatch” during the RNC hoped to identify undercover cops who might attempt to provoke violence during demonstrations and document police violence or misconduct against protesters.

Veteran police accountability activist José Martín has trained and organized with several organizations that participate in cop watch activities. Martín has been detained and arrested several times while cop watching with organized patrols in New York and Chicago.

His arrests in New York are part of a widely documented problem in the city. In fact, retaliation in New York against cop watchers has been so widespread that the NYPD had to send out an official memo to remind officers that it is perfectly legal for civilians to film cops on duty.

Martín described an experience in Chicago in which he felt police unjustly retaliated against him after a local CopWatch group formed and began regularly patrolling Chicago’s Pilsen neighborhood. After the group became well-known by the Pilsen community, residents gathered around an officer who had detained Martín after a patrol one night in 2009, calling for his release. The officer let him go shortly after.

Another veteran cop watcher, Jacob Crawford, co-founder of Oakland’s We Copwatch, is helping the community of Ferguson, Missouri, organize cop watch patrols and prepare the community for the potential of police retaliation. His group raised $6,000 to pass out 110 cameras to organizers and residents in Ferguson, and train them to monitor police activity in the aftermath of the upheavals that rocked the city after Wilson killed Brown.

“I do expect retaliation, I do expect that these things won’t be easy, but these folks are in it,” Crawford told Truthout. “This is something that makes more sense to them than not standing up for themselves.”