Scientists claim the discovery of a mummified alien in Peru 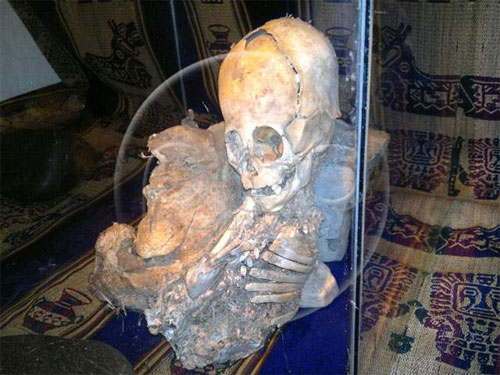 Is this an alien? (credit: RPP/Cesar Zapata)

Mummified remains of a body with a large head were discovered in Peru, and some scientists are claiming it to be of extraterrestrial origin.

News site io9 reports that Renato Davila Riquelme, an anthropologist at the Privado Ritos Andinos museum in Cusco, Peru made the discovery. The twenty-inch-tall body was originally thought to be that of a child, but Spanish and Russian doctors reportedly believe differently.

As io9 reports, Renato Davila Riquelme explained, “It has a non-human appearance because the head is triangular and big, almost the same size as the body. At first we believed it to be a child’s body until Spanish and Russian doctors came and confirmed that, yes, it’s an extraterrestrial being.”

FIRE IN THE SKY by BEAST1333 (TEMPLARS OF HIP HOP)