Still Classified: Terror Suspects’ Own Accounts of Their Abuse 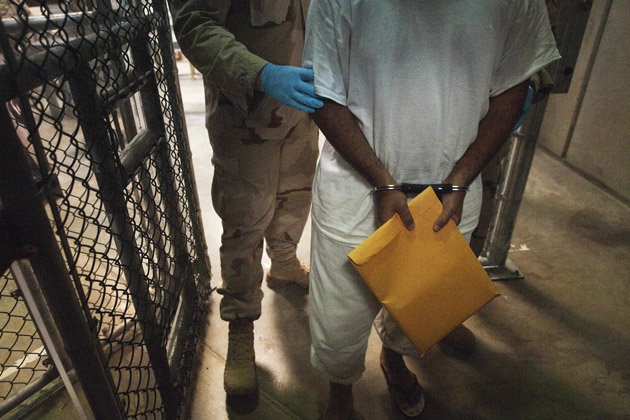 U.S. military guards move a detainee at Guantanamo Bay, Cuba, on March 30, 2010. In a motion unsealed last week, the government doubled down on its position that detainees’ observations and experiences of their time in U.S. custody are classified. (Paul J. Richards/AFP/Getty Images)

In a motion unsealed last week, the government proposed new ground rules for classified information in the trial of Khalid Sheikh Mohammed and four others charged with planning the 9/11 attacks.

The new order says the accused can’t talk about their “observations and experiences” of being held by the CIA, including “the enhanced interrogation techniques that were applied to the Accused” — that is, waterboarding and other abuse.

As we reported earlier this year, the government maintains that many details of the CIA’s detention program are still classified, despite widespread disclosures and an official acknowledgement by President George W. Bush in 2006. “Due to these individuals’ exposure to classified sources, methods, or activities of the United States,” an order filed in April read, anything the men say is “presumed to contain information classified as TOP SECRET / SCI.”

That sentence would have required defense attorneys to get the approval of a security officer to disclose even mundane information such as a date of birth, if it came from the defendant.

The new protective order — which is pending a judge’s approval — eliminates the line that all statements by the accused are presumed classified. In proposing the change, the government wrote it intended to “alleviate defense concerns” about the burden that presumptive classification added to their interactions with their clients. The government’s new motion says that attorneys would only need a review of information “they know or have a reason to know is classified.”

But when it comes to the CIA’s detention program, the new order states explicitly that “the term ‘information’ shall include without limitation observations and experiences of the Accused.”

A Pentagon spokesman did not return requests for comment about the new order.

The American Civil Liberties Union, news organizations, and James Connell, a lawyer representing one of the defendants, have challenged the government’s authority to declare something presumptively classified, and to extend classification to a detainee’s own statements. The ACLU filed a motion this spring arguing that the government forcibly “exposed” the detainees to this classified information, and that therefore the detainees couldn’t be bound to a non-disclosure agreement.

The group also argues that because the CIA program is now outlawed and has been so widely discussed, there is no compelling national security need to keep the details secret. The ACLU and media groups oppose the 40-second delay the government has imposed on broadcasting case proceedings. The government says the delay simply allows the commission to censor classified information. (That’s how the arraignments proceeded in May.)

The defense lawyer Connell said that in terms of the attorney-client relationship, the new proposal was an “important start.” But as far as public access goes, the ACLU’s lead lawyer on the case, Hina Shamsi, says that the new order “makes explicit what the government is seeking to do — prevent the public from hearing from the defendant’s own mouths their experiences of CIA torture.”

The judge presiding over the military commission, Army Col. James Pohl, would have to accept the government’s proposal for it to go into effect in the case. Pohl approved a similar protective order last year in the case of Abd al Rahim al Nashiri, who was allegedly behind the 2000 attack on the U.S.S. Cole. (That order has also been challenged by news organizations).

Hearings on the public access issue and Connell’s opposition to presumptive classification are scheduled for next week. Originally intended for August, they were postponed due to Hurricane Isaac.