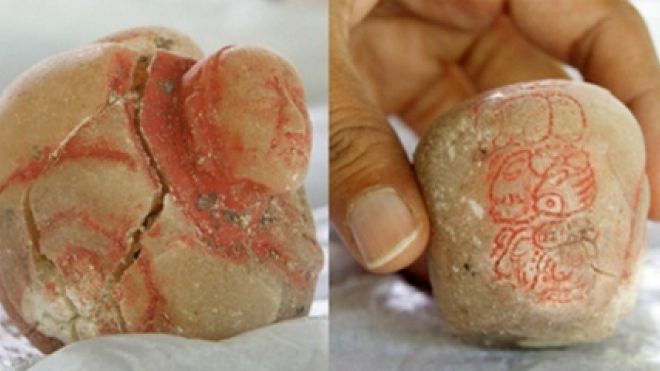 The carved alabaster vessel (shown from two sides) found in the burial chamber caused the archaeologists to conclude the tomb was that of Lady K’abel. (El Peru Waka Regional Archaeological Project)

Archaeologists say they’ve discovered what could be the tomb of one of the greatest Mayan rulers, the seventh-century warrior queen Lady K’abel.

The tomb was revealed during digging at the ancient Maya

city of El Perú-Waka’ in the rain forest of northern Guatemala. Alongside the body, excavators found a white jar shaped like a conch shell with the head and arm of a woman carved at the opening. The artifact had four hieroglyphs that suggest it belonged to K’abel.

“Nothing is ever proven in archaeology because we’re working with circumstantial evidence. But in our case we have a carved stone alabaster jar that is named K’abel’s possession,” David Freidel, an archaeologist working on the site, explained in a video. Freidel, of Washington University in St. Louis, said the find is “as close to a smoking gun” as you get in archaeology.

(A.D. 200-900). K’abel was part of a royal family and carried the title “Kaloomte’,” which translates to “Supreme Warrior,” meaning she had even higher in authority than her king husband, K’inich Bahlam, according to Freidel and his excavation team. She was the military governor of the Wak kingdom for her family, the imperial house of the Snake King.

K’abel is believed to have reigned with her husband from about A.D. 672-692. [Top 12 Warrior Moms in History

Ceramic vessels found in the burial chamber and carvings on a stela (stone slab) outside of it also indicate the tomb belongs to K’abel, as does a large red spiny oyster shell found on the lower torso of the remains, the researchers said.

“Late Classic queens at Waka’, including K’abel, regularly wore such a shell as a girdle ornament in their stela portraits while kings did not,” the researchers wrote in a report on the finds.

An examination of the remains indicated the buried person was a “mature individual,” the researchers wrote. But the bones were too deteriorated for scientists to determine whether they belonged to a male or female.

Excavations have been underway at El Perú-Waka’ since 2003. The K’abel find has not yet appeared in a peer-reviewed scientific journal.