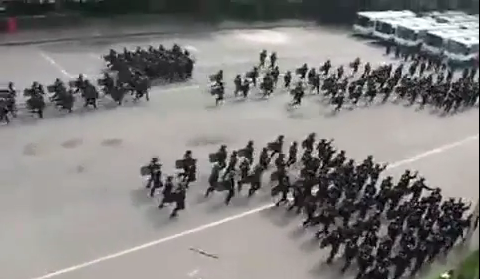 Information about tactics can be derived from accounts of battles, but the very military manuals known to have existed and to have been used extensively by commanders, have not survived. Perhaps the greatest loss is the book of Sextus Julius Frontinus. But parts of his work were incorporated in the records of the historian Vegetius.

The importance of the choice of ground is pointed out.
There is an advantage of height over the enemy and if you are pitting infantry against cavalry, the rougher the ground the better. The sun should be behind you to dazzle the enemy. If there is strong wind it should blow away from you, giving advantage to your missiles and blinding the enemy with dust.

In the battle line, each man should have three feet of space, while the distance between the ranks is given as six feet.
Thus 10’000 men can be placed in a rectangle about 1’500 yards by twelve yards, and it was advised not to extend the line beyond that.

The normal arrangement was to place the infantry in the centre and the cavalry on the wings. The function of the latter was to prevent the centre from being outflanked and once the battle turned and the enemy started to retreat the cavalry moved forward and cut them down. – Horsemen were always a secondary force in ancient warfare, the main fighting being done by the infantry.

It was recommended that if your cavalry was weak it was to be stiffened with lightly armed foot soldiers.

Vegetius also stresses the need for adequate reserves. These could prevent an enemy from trying to envelope one’s own forces, or could fend off enemy cavalry attacking the rear of the infantry.
Alternatively, they could themselves move to the sides and perform an enveloping manoeuver against an opponent.

The position to be taken up by the commander was normally on the right wing.

The tortoise was a essentially defensive formation by which the legionaries would hold their shields overhead, except for the front rows, thereby creating a kind of shell-like armour shielding them against missiles from the front or above.

Helping the Helpless – Humanity Needs More of This

Did the Dimona Dozen murder the Fukushima 50?