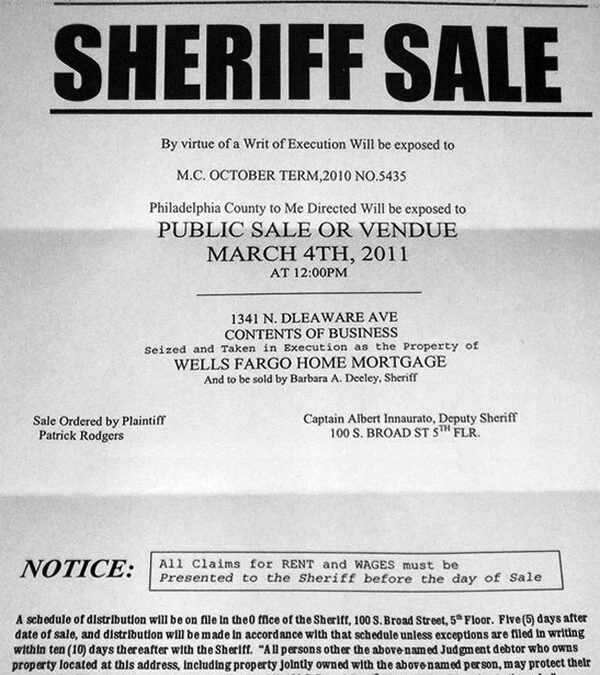 Wells Fargo is meeting today at noon with the Philadelphia homeowner who “foreclosed” on them, The Consumerist has exclusively learned. Patrick says he “received a call from upon high” late yesterday and that he now has an appointment, “with a very senior Wells Fargo person.” It will be interesting to see how this plays out. But how did Patrick go from embattled and ignored homeowner to seated across the negotiating table with leverage? I spoke with him to find out more about both how and why he did what he did. His story is an inspiration to anyone who’s dreamed of going toe-to-toe with the big banks and winning. Turns out that armed with persistence, and a little legal know-how, Davids can take down Goliaths.

All Patrick, pictured above along with his house, wanted was for someone from Wells Fargo to talk to him. A single, white, goth and industrial music event promoter who declines to give his age, he wanted someone to explain why they were doubling his premiums and requiring him to insure his century-old house for its full replacement value instead of the market value. Wells Fargo wanted him to take out almost a million dollars worth of insurance His broker told him full replacement value would cost about $1 million to insure in the event his house, a 6-bedroom, 3 bath Tudor he paid $180,000 for in 2002, was reduced to rubble and needed to be rebuilt stone by stone to standards from over a hundred years ago. Though he’s diligently paid his mortgage on time for the past seven years, he couldn’t afford the jack-up in premiums, nor did he see a reason why he should have to accept them.

Besides the increase in premiums, Wells Fargo was also tossing extra and inexplicable fees on his account. For instance, they charged him for two home inspections in one month, even though no inspectors had come out to house.

Throughout the process, Patrick admits there was “about 10% revenge” motivating him, but with each escalating step he took he really thought that okay, this is the one that will catch their attention and make them talk to me.

About two years ago, after Wells Fargo stopped responding to his letters requesting more information, Patrick boned up and learned about a law called the Real Estate Settlement Procedures Act (RESPA). The law was enacted to safeguard homebuyers from anti-competitive and collusive behavior among the companies and agents involved with buying and selling real estate. One of the protections involves the “Qualified Written Request,” or QWR.

The Qualified Written Request is a specific kind of letter that you can send to your mortgage servicer when you believe there is an error on your mortgage account. You have to make sure to follow the rules for formatting it, but the servicer is bound by federal law to respond within a certain period of time. If they don’t, you can go after them for actual damages, costs and attorneys fees, plus $1000 of additional damages if there is a pattern of noncompliance.

This is a sample QWR as found on the U.S. Department of Housing and Urban Development site:

Attention Customer Service. It’s important to format it exactly like this and to send it in separately from your mortgage payment:Subject: [Your loan number]
[Names on loan documents]
[Property and/or mailing address]

This is a “qualified written request” under Section 6 of the Real Estate Settlement Procedures Act (RESPA).

I am writing because:

Describe the issue or the question you have and/or what action you believe the lender should take.
Attach copies of any related written materials.
Describe any conversations with customer service regarding the issue and to whom you spoke.
Describe any previous steps you have taken or attempts to resolve the issue.
List a day time telephone number in case a customer service representative wishes to contact you.
I understand that under Section 6 of RESPA you are required to acknowledge my request within 20 business days and must try to resolve the issue within 60 business days.

“Do your research,” says Patrick. When drafting it, besides getting tips on writing one from various consumer sites, he also went to bankingsites and saw how bankers were talking about ways they had rejected various QWRs. He made sure to craft his so it couldn’t get disqualified. “Use the internet as your law library,” says Patrick. With a little Googling, he was quickly about to find official resources and templates that guided him, step by step.More than any site, blog or message board, “Looking at the actual law was a big help,” he said. A lot of websites offered bits and pieces, or their (mis)-interpretation, of the law. The best resources came from going to the official US Government pages and looking at the actual statutes in full. “It took a little bit of time to sit and process the legalese,” but it was worth it.

Within 20 days, the company must say they got the QWR, and they have 60 to take action on it. That action must be to either correct the problem or to respond back with why they think they’re right. They must also give a name and phone number for the borrower to contact with questions about their account.

Wells Fargo did none of these, says Patrick. So he moved on to the next step provided by RESPA: statutory damages, aka, cash money.

DO NOT PASS GO

If a company fails to respond to a QWR, the borrower can take them to court and claim damages. Patrick contacted several attorneys but none wanted to take it on because of the low payout and what they said was the unlikelihood of him winning. So he became his own advocate.

Patrick filed his claim in local municipal court, also known as small claims court. Most of the time it costs less than $100 in filing fees. This post tells you how to get started with your small claims filing. Patrick admits he’s no legal genius. “I couldn’t pass the bar if my life depended on it,” he said, but he found the process wasn’t that hard and it helped that “the courts look kindly on plaintiffs representing themselves pro-se.” If you get in touch with the clerk’s office they can get you started with all the forms and filings you need.

At trial, Wells Fargo didn’t send anyone to represent themselves, so Patrick got a default judgment against them for $1,173. They eventually sent him the amount, but they had still had not responded to his letters or agreed to fix his premiums, as required by law. So he filed for a sheriff’s levy. This directs the sheriff to seize and sell the debtor’s property to pay up. In this case, it was the local branch office of Wells Fargo mortgage, the ones who had been ignoring him all these years.

To get the levy, he presented the court clerk with his default judgment and got the Writ of Execution and the Instructions for Levy which he delivered to the sheriff’s office. He paid them a $50 deposit to cover their administrative costs. A local sheriff then went into the Wells Fargo branch office and took an inventory and posted notice that nothing could be removed. The court also gave him several posters which he was expected to xerox and post around town.

As a music event promoter, he says he’s put up a lot of posters, but these were the most satisfying he’s ever hung. One is reprinted below.

USE THE MEDIA TO TELL YOUR STORY

But far more effective than hanging the posters was emailing the posters along with his press release to local media outlets. Within a day of doing that he had local tv stations and the Philadelphia Inquirer covering his story. Based on his “16 years as a promoter,” Patrick instantly knew the power of “working the PR angle to publicize the sale.”

On Tuesday, the court put a temporary hold on the sale and has ordered a hearing on February 23 to figure out the final result. ABC and USA Today have also now picked up his story. Patrick says he’s still owed $50, the fee he paid to initiate the levy, and he’s still in disagreement with them about his premiums being doubled. Wells Fargo is meeting with Patrick today at noon to discuss his situation.

“It does seem to tentatively indicate that someone in the very high ranking position of authority” has finally taken an interest in his case, says Patrick.

“We could have handled Mr. Rodgers very unusual situation better,” said a Wells Fargo spokesperson when reached for comment. “We’re doing our best to resolve everything to everyone’s satisfaction.”

A message left with the Wells Fargo branch manager was not returned.