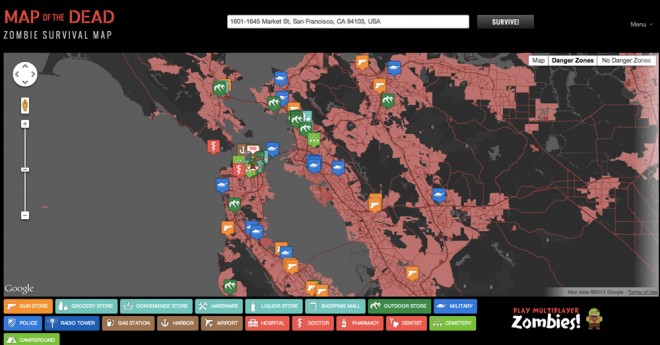 How safe are you when the zombies come for your brain? Photo: Google Maps/Doejo

The Walking Dead teaches us that well-stocked pantries and armories are paramount to the survival of the human race after a zombie infestation. Canned food and ammunition: You can never have enough of these key essentials.

Enter the Map of the Dead from Doejo, which overlays zombie danger zones and potential supply locations on a Google Map of your local haunts. Red areas denote population centers where zombies might graze, while dark gray zones cover parks and wilderness areas, which are most likely to be walker-free. Supply locations are annotated with helpful descriptions — liquor stores, hospitals, gun shops, military bases and cemeteries are just some of the locations highlighted.

The map uses Google APIs and keyword searches to determine the location types that appear on the maps. The developers at Doejo are looking into adding more location types, such as schools, pawn shops and barricades. Unfortunately, certain keywords are currently returning too many false positives for these types of landmarks.

As for user-generated content — in other words, crowd-sourced supply and hiding place annotation — it’s something Doejo is exploring, but has no definite plans to implement. Which might be good. You don’t want to share your favorite fortified sniper perch with the whole world.

Still, with the Doejo maps, you can better plan for the coming zombie apocalypse, and even other natural disasters. At Gadget Lab, we scanned not only our local San Francisco environs, but also Chicago and New York City to determine safe zones should the worst come to pass. (We briefly considered a quick survey of Los Angeles, but decided that traffic snarls will doom the City of Angels to a quick and unstoppable zombie epidemic. Sorry, LA. We’ll miss your movie blockbusters and sunny beaches.)

Here’s a quick look at how well our three metropolitan areas are set up for riding out the zombie plague.

Shut down the bridges and start rooting out the undead. Photo: Google Maps/Doejo

Manhattan is an island, which gives it an advantage over outlaying areas, insomuch that once the city shuts down the bridges and tunnels, survivors can start rooting out the water-locked zombies. On the flipside, a quick look at the map shows only three gun stores.

Sure, you can kill a zombie with a well-placed smack to the head, but who wants to get that close to something that wants to chew on your shoulder? Also, be careful about that military base between the two cemeteries — it’s actually just a recruitment center. And, of course, stay far away from cemeteries, which are typically popular spawning points for the undead.

As with all the Doejo maps of metropolitan areas, the Manhattan map only shows major stores, and leaves out neighborhood bodegas. So make friends with the owners of these stores right now. A few pleasantries today could prove fruitful tomorrow.

The Windy City is surrounded by suburbs on three sides. That much open space could help the citizens of Chicago escape early in the infestation. That said, if you’re trapped in the city, it’s best to stay near the shore, as it’s easier to defend three sides than four. Plus, if you have an escape boat, you can head to Canada where the zombies are allegedly nicer.

Four military bases are within the immediate Chicago area, and could potentially help keep zombie infestation to a minimum. Or, conversely, the soldiers could become zombies — military-trained zombies with access to guns. It’s a judgement call. You have the map, so at least you know your options.

San Francisco has the advantage of being at the tip of a peninsula. Shutting down the two bridges the lead into the city should be no problem. The disadvantage of San Francisco is that it’s San Francisco, home of pacifism and protest. People here may not have the gumption to mount an effective counter-attack, and no amount of pacifistic protesting will stop a zombie from popping open your skull, and devouring your brain like it’s soup inside a sourdough bread bowl.

Our lack of local gun stores is especially disturbing. Hopefully, the thin design of the MacBook Air — you can find four or five in every local hipster cafe — will help these notebooks serve as effective weapons for zombie decapitation.

San Francisco’s saving grace may be its DIY resourcefulness. Within a few days of the collapse of society, someone will probably have an open-source 3D printable weapon that not only kills zombies, but also offers a much lower carbon footprint than your average bullet.

Plus, San Francisco moved all of it’s dead to the nearby suburb of Colma. That should cut down on the first wave of zombies that wander the streets lusting for brraaaiiinnnsss.