After Martial Law: How to Avoid the FEMA Camp Detention Centers 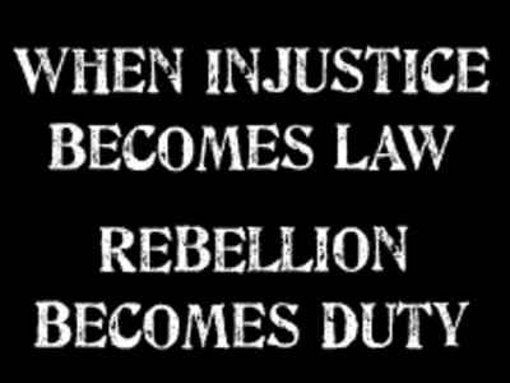 I wrote a news story recently called “How technology will send you to hell in the FEMA camps” It was wildly popular and raised the question in my mind, “How do I prevent my family from going to the camps?”

The first thing is to know what to expect before hand. While people think about the dollar dropping to nothing, or an Obama re-election, you need to consider the most pressing signs of a pending martial law.

About 15 minutes or less away from being put into a bus.

But we aren’t those people. We are the kinds that enjoy freedom.

So what do we look for?

Using the backbone of a military operation, you must make the enemy (that would be you) deaf, dumb, and blind.

What does that mean? It means you must be blind: Not knowing what to expect, how many men are in the operation, and what your final destination will be. This means that the operation will most likely take place in the middle of the night. When they roll up, mega watt lights will be shone onto the neighbourhood. This disorientates you as well as illuminate your home for movement. This also means the power to your block will be secured. Depending on the size of the town, perhaps several blocks at once. That would be a good thing. Read on…

Deaf means that you won’t know what is going on. Loud noises, such as bullhorns shouting orders, diesel engines running, and people yelling at you to go here or there. It also means you won’t be able to receive texts or cell phone service.

Dumb, or mute, means you won’t be able to call anyone, tweet, post a Facebook update, send an email of warning. Imagine if the events took place in Chicago. How quick would such a warning get spread all over Facebook or Twitter. It would “trends” quickly and the element of surprise would be gone.
Making you deaf and dumb is as simple as securing the internet with the Internet Kill Switch. That ends Facebook, Twitter, and Email.

And all you have to do to secure the cell phone or land-line service is to have the US military show up at the local phone office and have them secure all lines in the place. Turning the power off would be as effective as cutting lines, but once power is restored you could have normal service. Infrastructure would be maintained.

Your neighbourhood is now deaf, dumb, and blind.

You need to buy yourself some time. Not much time, but just enough time.
And you have about 5 minutes to do it in. Maybe less.

What do you need?

You need to make an alert when you lose power. This is from my site:

“I took a small wall wart that is rated at 12 volts and about 100 mA. I attached it to the power and ground part of a small 12v relay I bought from radio shack. I then took a 9v battery connector and a piezeo alarm and put it on the connectors of the relay that if there is no power to the relay – will allow current to flow. The way you find that is to put the red wire of the connector to the relay, and one of the leads from the alarm to the opposite side of the relay. Connect the black wire and the other alarm wire together.
Provided you have a 9v battery on the connector you should hear a sound. If not, change to a different spot on the relay. So when you apply power by plugging in the wall wart, the sound goes off. Remove the wart or turn off the power, you get an alarm sound. “

When I was in the Navy, any time we lost power we went into an immediate Security Alert. And you should too. When that alarm sounds (Put it in your bedroom as close to the bed as possible), after you pull the alarm out of the socket, get up and hide the children,

And that means you have to have pre-arranged hiding spots.

A window seat is a great way to start. Make a bench, bolt it to the wall under the bedroom window, and make small doors for the child to hide in. You can do the same for your room. Tell the children just to go if they are ever told, and to stay very quiet until you tell them to come out. And only you. Pretend to be someone else and see if they come to them. Soldiers may be very sneaky and say, “Your parents told me to get you. Come on, let’s go to them!”

If you can’t make a window bench, then fill your closet up with “boxes”. These boxes are “stacked” to make it look like a storage area, but it’s just a shell. If you are in a manufactured home or a single story home, go to the closet and cut open a hatch to the crawl space. Have a black blanket so you can hide under the blanket to stay concealed. USE YOUR IMAGINATION!

The idea is that soldiers don’t have much time to search each home. They have to keep moving onto the next house. Once they leave and the power goes back on – DON’T CHANGE ANYTHING. If the bathroom light was on, leave it on. The smart meters will detect and record ANY changes and it will alert someone that there are people within the home!

Drones will be used to monitor communities and neighbourhoods. Going out after dark is the same as going out during the day.

If you go out at night, take a night vision capable video camera. Put black plastic around the IR lamp that is usually beneath the camera’s lens. This will prevent the drone from seeing the IR light, but you’ll be able to see the IR lights on the drone in the dark.

If you feel froggy, shoot down the drone AS IT LEAVES! The flight will be level and of constant speed, enough for you to get a bead on it. It’s difficult to tell where the shot came from, and you’ll get some satisfaction of taking one down. These thing are expensive and if they have to redirect one away from another area, that means someone else is getting a break.

If you have to move from one place to another, do so during a rain or thunderstorm. These conditions make drone flying very difficult and seeing anything of value VERY difficult. Yes, it is horrible conditions for you, but at least you will be free.

If, during the day, you see people wandering through your town, ignore them and hide. They may be “spies” looking for the last holdouts. As a rule of thumb, 8 to 80, blind, crippled, or crazy, means anyone may be a threat. Don’t kill them, just let them pass through. Watch them to see if they use a radio. IF they do use one, listen for codes such as, “Secure”, “Subjects”, “Natives”, or “SitRep (Situation Report)”

Such phrases would mean that they are looking for you as wolves in sheep’s clothing. DO NOTHING towards them. Get their photos if you can but remain hidden.

Satellites may detect heat from fireplaces, so use the covert cooking methods like solar cooking, Hay Box cooking or Creveche. If you can, light a match in the sewers to eliminate any flammable gasses, and cook down there. The streets should hide the heat signature well enough, especially in the day. Solar cooking using the back of a pickup may be a good decision as it may imitate the accumulated heat of a canopy.

You will be on your own. You will be the deciding factor if you live free or die free.

But it’s your decision. No one else makes it for you.

And that’s why it’s called FREEDOM.