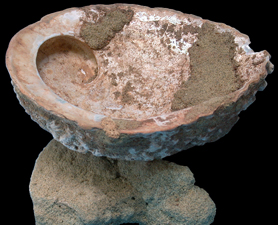 The 100,000-year-old workshop is the earliest example of an art studio.

A tiny cave on the South African coast has yielded the earliest evidence of an artist’s studio — a processing workshop where a liquefied ochre-rich mixture was produced 100,000 years ago.

Christopher Henshilwood from the Institute for Human Evolution at the University of the Witwatersrand, Johannesburg, and colleagues found the ochre-rich mixture stored in two abalone shells at Blombos Cave on the southern Cape Coast, east of Cape Town, South Africa.

Along with the shells, the researchers found tools such as bones, charcoal, grindstones and hammerstones.

The material shows that 100,000 years ago “humans had the conceptual ability to source, combine and store substances that were then possibly used to enhance their social practices,” the researchers write in Friday’s edition of the journal Science.

The ochre was possibly used for decoration, painting and skin protection, said the researchers.

The artefacts were found together buried in sand in 2008, as if someone had stored them with the intention of retrieving them at a later time.

In the past three years the findings underwent detailed analysis and Optically Stimulated Luminescence (OSL) dating.

“The analysis of the residues in the shell, on the tools and the pieces of ochre has allowed us to reconstruct the function of the tools involved and evaluate the degree of behavioral complexity implicit in the process. We were also able to reconstruct the recipe to produce the pigment,” second author Francesco D’Errico, director of research at the French National Centre for Scientific Research (CNRS),told Discovery News.

The researchers believe that pieces of ochre were first rubbed on quartzite slabs to produce a fine red powder.

“Ochre chips were crushed with quartz, quartzite and silcrete hammerstones/grinders and combined with heated crushed, mammal-bone,charcoal, stone chips and a liquid, which was then introduced to the abalone shells and gently stirred,” Henshilwood said.

A bone was probably used to stir the mixture and to transfer it out of the shell as with a painter spalula.

According to Erella Hovers, an archaeologist at Hebrew University of Jerusalem, the finding confirms the hypothesis that the production and use of ochre were a complex process that involved forethought and planning.

“Bits and pieces attesting to various phases of the process have been found independently and separately in various sites in and out of Africa at comparable ages, but to the best of my knowledge this is the first time that the whole process can be reconstructed,” Hovers told Discovery News.

Most interestingly, the Blombos elaborate ochre processing used a mixture with marrow fat to produce a paint rather than with plant resin to produce a mastic, Alison Brooks, professor of anthropology at George Washington University in Washington DC, noticed.

For more than 20 years, Blombos Cave has been yelding bone tools and artefacts left by its Middle Stone Age inhabitants. In 2002, researchers found 70,000-year-old blocks of ochre with abstract engravings, suggesting the emergence of abstract thinking and modern human behaviour much earlier than previously thought.

“The recovery of these toolkits adds evidence for early technological and behavioural developments associated with humans and documents their deliberate planning, production and curation of pigmented compound and the use of containers,” said Henshilwood.

“It also demonstrates that humans had an elementary knowledge of chemistry and the ability for long-term planning 100,000 years ago,”he concluded.

Underwater Structure Thought To Be Over 14,000 Years Old & Man-made