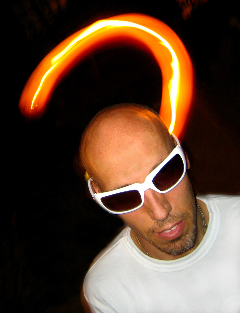 artificialeyes.tv is an Istanbul / Vienna based project of video artist and software developer Michael Parenti, aka exiledsurfer  artificialeyes.tv’s aim is to bring people closer to the art form of Live Video Mixing (known as “VJ’ing”) through the creation, performance and distribution of unique and engaging audio-visual interpretations of contemporary culture. Check out the Loopcast for sample clips from our live performances.

Born in Malibu California, Michael Newton Parenti has been involved with music and fashion since managing the seminal LA band “The Surf Punks”. After studying communication Theory and International Affairs at Pepperdine University,he left LA in 1992 to settle in vienna, working as a music journalist, music convention producer, and later forged a career as a music video director / producer, grounding in the process the boutique agency Uncultured American Bastard Media, gsmbh. After producing 52 hours of tv programming about the austrian music scene for tv stations in austria and germany, as well as directing over 200 music videos in europe, and commercials for Gibson Guitars and Marshal Amplifiers, he was a pioneering member of europe’s first video web-streaming company, webfreetv.com, and went on to do 3G multimedia development for europe’s largest internet consultancy at the time, framfab.com, (famous for the launch of Nike Shox) After the bubble burst, a pink slip allowed him to shift his focus to the branding and marketing of an urban underground anti-fashion label together with german fashion designer Katha Harrer, called km/a, which became well known for its outrageous multimedia performances in lieu of the traditional catwalk. It was here that Michael first started performing with real time video manipulation software such as videodelic and Johnny Dekam’s VDMX, leading him to a career as an internationally booked VJ. Since 1998, he has performed with the likes of Jamiroquai, Ladytron, John Digweed, Carl Craig, Richard Dorfmeister, Sven Väth, Stereo Total and over 300 other DJ’s and bands in Europe, South America, and The Middle East. Michael currently is based in Istanbul, Turkey, where he has continued working for both advertising and media agencies as a freelance creative director, garnering two Media Lions in Cannes for his efforts on behalf of OMD Turkey, as well as continuing his career as a VJ. His most current project includes the VJ collective artificialeyes.tv Michael is represented as a video artist and photographer by Pi Artworks exhibiting this year in paris, cologne, and istanbul. in his new role as the Special Consul to Turkey for the micronation State of Sabotage grounded in 2003 by austrian performance artist Robert Jelinek, Michael curates shows including turkish and international artists, the most recent of which included works by HR Giger, Jonathan Meese, Irfan Önurmen, and Joseph Beuys.