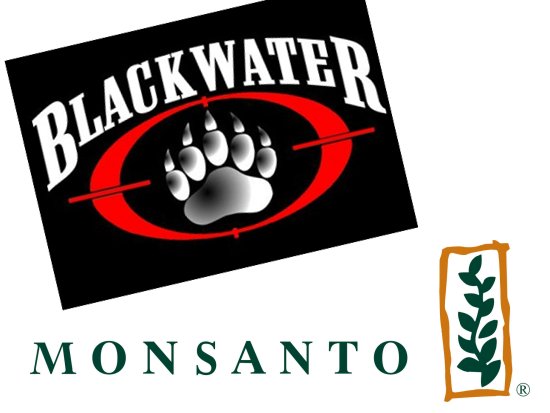 It is known that for at least two years Monsanto, the company that specialises in genetically modified organisms, contracted Blackwater (later renamed Xe, then Academi) to spy upon anti-GM protesters (see below for details), though what Monsanto do not like is when the tables are turned and they are spied upon (by citizens at large). So, as a first step in this process, thanks to an anonymous leaker, Darker Net can provide names and email addresses of 300 key Monsanto staff should you like to offer your thoughts on their products (and espionage strategies).

Note: the window of names and email addresses is scrollable..

Internal communications from Total Intelligence (later renamed OODA) showed Monsanto first hired Blackwater operatives in 2008. Here are the events that led to that.

1. In January, 2008, Total Intelligence chair, Cofer Black, travelled to Switzerland to meet Kevin Wilson, Monsanto’s global security manager. Afterwards, Black emailed other Blackwater executives, saying that Wilson “understands that we can span collection from internet, to reach out, to boots on the ground on legit basis protecting the Monsanto [brand] name…. Ahead of the curve info and insight/heads up is what he is looking for.” Black also wrote that payments to TI would be paid out of Monsanto’s “generous protection budget” and estimated the potential payments at between $100,000 and $500,000. According to documents exposed by journalist, Jeremy Scahill, Monsanto paid TI $127,000 in 2008 and $105,000 in 2009.

2. In a later email to The Nation , Wilson confirmed that Monsanto hired Total Intelligence until early 2010, but claimed that Total Intelligence only provided Monsanto “with reports about the activities of groups or individuals that could pose a risk to company personnel or operations around the world which were developed by monitoring local media reports and other publicly available information”.

3. Wilson asserted that Black told him that Total Intelligence was “a completely separate entity from Blackwater.” However, we should note the following… Academi (the current name for Blackwater) was founded by Erik Prince, a former Navy SEAL and Cofer Black was its vice-chairman from 2006 to 2008 (he was formerly the director of the CIA’s Counterterrorist Center at the time of the September 11 attacks in 2001). Before joining Academi, Black was the Chair of Total Intelligence Solutions as well as vice-chair of Blackwater. Also, Robert Richer was vice-president of intelligence at Academi until January 2007, when he then formed Total Intelligence (he was formerly the head of the CIA’s Near East Division).

4. In summary, Black and Richer are the key players that link Blackwater with Total Solutions and both with Monsanto and their contract to spy on anti-GM groups and organisations worldwide as well as retail disinformation via the Internet using proxy identities. Click here for a map of Xe (Blackwater’s new name before becoming Academi) front companies and here for map of company relationships.