How Cannabinoids May Slow Brain Aging 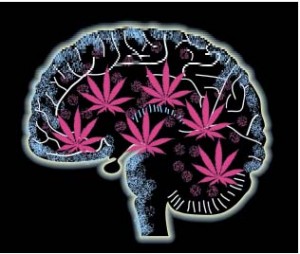 Stoners aren’t known for their memory prowess but a new review suggests that drugs similar to marijuana’s active ingredients may hold promise for preventing— or even reversing— brain aging and possibly Alzheimer‘s and other degenerative brain diseases.

Since the mid 2000′s researchers have been building an appreciation for the power of marijuana-like substances that make up the brain’s cannabinoid systems. In animal experiments, for example, synthetic compounds similar to THC—marijuana’s main psychoactive component—have shown promise in preserving brain functions. A 2008 study even demonstrated that a THC-like substance reduced brain inflammation and improved memory in older rats.

The latest review, published in Philosophical Transactions of the Royal Society B, suggests that activating the brain’s cannabinoid system may trigger a sort of anti-oxidant cleanse, removing damaged cells and improving the efficiency of the mitochrondria, the energy source that powers cells, ultimately leading to a more robustly functioning brain.

Previous studies have linked cannabinoids to increased amounts of brain-derived neurotrophic factor (BDNF), a substance that protects brain cells and promotes the growth of new ones. Since new cell growth slows or stops during aging, increasing BDNF could potentially slow the decline in cognitive functions.

Activation of cannabinoid receptors can also reduce brain inflammation in several different ways, which may in turn suppress some of the disease processes responsible for degenerative brain diseases such as Alzheimer’s.

Andras Bilkei-Gorzo of the Institute of Molecular Psychiatry at the University of Bonn in Germany and an author of the study, is encouraged by the expanding knowledge of the brain’s cannabinoid system and its potential for leading to new understanding of aging in the brain. “[C]annabinoid system activity is neuroprotective,” he wrote, and increasing it “could be a promising strategy for slowing down the progression of brain aging and for alleviating the symptoms of neurodegenerative disorders.”

Still, Gary Wenk, professor of neuroscience, immunology and medical genetics at Ohio State University, who conducted some of the research Bilkei-Gorzo included in the review, is aware of the delicate nature of cannabinoid research, given the controversial nature of medical marijuana issues. “The literature is a mess and he’s done a nice job organizing it,” he says. “He was positive about developing cannabinoid drugs without going overboard.”

Other studies covered in the review showed that mice bred to lack the cannabinoid receptors have better memories early in life but have more rapid cognitive decline as they age, including inflammation in the hippocampus, a key region for memory. “This finding suggests that, at some point during aging, cannabinoid activity helps maintain normal cognitive functions in mice,” says Daniele Piomelli, professor of neurobiology, anatomy and biological chemistry at the University of California – Irvine, who was not associated with the study.

Piomelli cautions that the review doesn’t support the idea of using marijuana to improve brain aging among the elderly, not least because of its psychoactive effects. “This is definitely an important area of investigation but we are still far from a consensus,” he says.

Moreover, some of the research covered in the review had conflicting results. Although three clinical trials studied cannabinoids for the treatment of Parkinson’s Disease, these studies “did not provide a clear answer whether cannabinoids modify the progression or the outcome of the disease,” wrote Bilkei-Gorzo. He found similar results for Huntington’s Disease, which, like Parkinson’s, is a progressive, degenerative brain disorder. And for the most common form of dementia, “Despite the promising preclinical results, the detailed clinical evaluation of cannabinoids in [Alzheimer’s] patients is missing,” he said in the paper.

The social and political challenges to conducting such research, however, mean that it may be a while before we see such scientific gaps filled. Scientists have yet to conduct, for example, a solid study in which they follow marijuana smokers to see if they are more or less likely to develop Alzheimer’s— or to compare the cognitive decline of marijuana smokers to those who do not smoke. Doing so is too controversial to attract funding.

“In my experience, working in this area is like touching the third rail,” says Wenk, “I get hate and love mails that are bizarre and phone messages from people too high to talk. Some of my colleagues have left the area after seeing their names in the National Enquirer… I do not blame a war on marijuana but rather the public’s prejudice and extreme bias. I’ve now discontinued my research on this system.”

He and others in the field are not completely pessimistic, however. He says, “I’ve been trying to find a drug that will reduce brain inflammation and restore cognitive function in rats for over 25 years; cannabinoids are the first and only class of drugs that have ever been effective. I think that the perception about this drug is changing and in the future people will be less fearful.”

Given that Alzheimer’s already affects one in eight people over 65— and nearly half of those over 85—and there have been few successes at treating or preventing it so far, that would certainly be a welcome change.