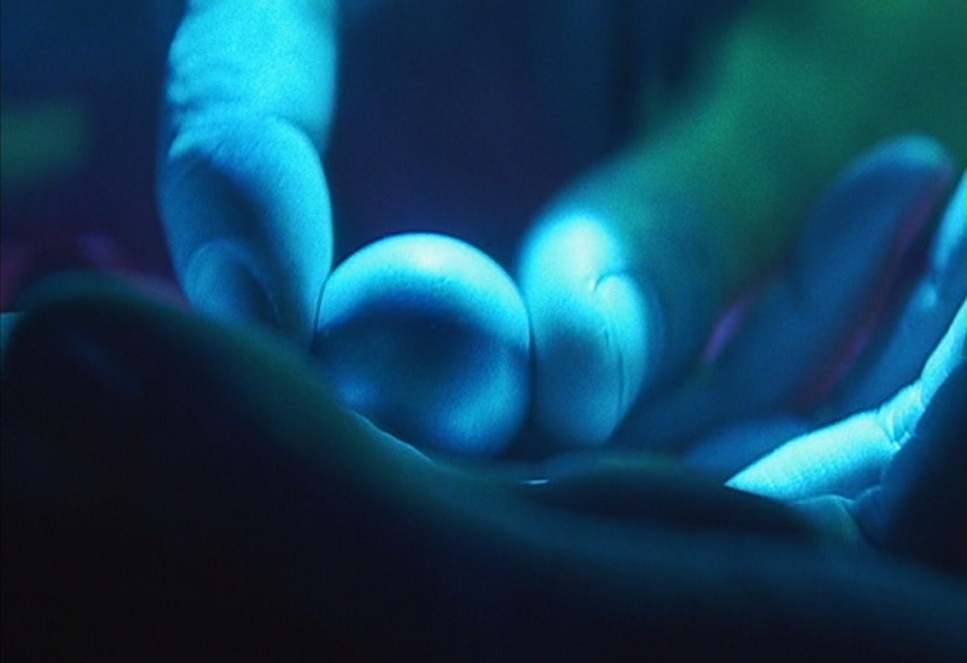 In films that present humans alongside alien counterparts, we inevitably learn more about our own humanity than of the alien creature’s new perceptions. When we visit a new country far from home, we make just as many (if not more) discoveries about ourselves as we do about our host nation – as any traveler can attest, looking at our own culture from a distance allows for a better understanding of both its strengths and frailties, and opens it up to a greater dialogue about the world at large.

In 1977, the Voyager 2 probe was sent into space with a recorded message of peace (in 55 different languages) along with an eclectic collection of music and 116 images of life on this planet. John Carpenter, in his 1984 film Starman, explores what might have happened if an alien ship were to encounter this Earthling greeting. Alongside a sweet romance between the two lead characters, there is the story of how American government officials react to the appearance of the “Starman.” A socially-conscious piece of sci-fi, the naive and otherworldly Starman reveals both the government’s uneasiness with extraterrestrials (despite spending trillions on defense yearly) and the public’s split perspectives concerning the existence of real alien beings.

Many UFOlogical scenarios begin with a cataclysmic encounter that destroys the planet. Aliens are often depicted as a race evolutionarily superior to our own, with apocalyptic powers that can be used to levitate objects, save lives, start cars – different remarkable skills for different alien life forms. For years, comics, books, television shows and films have drawn people to the world of UFOs and extraterrestrial activities. In the 1940s and 50s, freakish events – the end of the Second World War, the unforgettable image of the atom bomb’s mushroom cloud and a pervasive storm of anticommunist sentiment – inspired the creation of a slew of sci-fi masterpieces. The Roswell Crash happened in 1947, only two years after the atomic bomb was dropped on Japanese citizens. These early B-movies put the nation’s fears of invasion and destruction on film. The reality of an alien invasion, after the paranoia and chaos of the era, did not seem so outside the realm of possibility.

The “mysterious” nature of aliens, and their continued unconfirmed legitimacy by the U.S. government only adds to their appeal. While many prominent scientists have attested to the likelihood of their existence, the proof of alien abductions and landings has been largely discredited. Carl Sagan, in one of his last interviews, said that extraterrestrial intelligence is a “wonderful prospect, but requires the most severe and rigorous standards of evidence.”

For most UFO enthusiasts, theories about advanced civilizations on other planets are a matter of sheer speculation, with little consideration for standards of scientific conjecture. That said, it is difficult to consider extraterrestrial life in terms of our own. Different types of thinking are needed to properly consider a race of beings capable of journeying among the stars – we need to be mentally flexible, as these beings are truly alien and, in all likelihood, of an appearance that our eyes will be completely untrained to see.

What reasons could there be to hide evidence of aliens? Since the Roswell, New Mexico incident, many believe that there are sweeping security measures and secrecy in place to keep the subject under wraps. But the public is not convinced. According to two National Geographic polls held in 2012, 36 percent of Americans believe UFO’s exist, and 79 percent believe a government coverup is responsible for withholding detailed alien information.

This past summer, microbiologists in California discovered bacteria that survive, not by eating “food” as we commonly think of it, but by feeding on electricity. NASA has theorized that beings in the “dark energy biosphere”, beneath deep sea beds, consume so little energy that their “means of living could theoretically be used by extraterrestrial life living in other areas of the solar system, or universe.” Both of these findings prove that limiting space exploration to “Earth-like” planets will limit our discovery of other living beings. If we are modeling our assumptions as to what an alien life needs on our own, isn’t that missing the entire point? Who knows what kind of conditions another life form needs to thrive? Astronomers from the government-backed SETI (Search for Extraterrestrial Intelligence) have recently conceded that the chance of discovering life on other planets is inevitable and will likely occur within the next 20 years.

If there are beings capable of harnessing pure energy, they may take the form of these electron-feasting bacteria. Certain species are also capable of producing electrons while metabolizing chemicals, leading scientists to believe that they may be an eventual source of natural energy.

Today, with energy prices skyrocketing, the environment in crisis mode, and no clear solution in sight, it could make sense to invest in projects towards this end. While we haven’t yet been visited by other forms of life, by harnessing pure energy we may edge closer to a new kind of sustainability. Canadian science fiction writer Karl Schroeder has posited that “any sufficiently advanced technology is indistinguishable from nature” (borrowing from Arthur C. Clarke’s original, “any sufficiently advanced technology is indistinguishable from magic”). Aliens may blend seamlessly into the galaxy, their artificial systems no different from our natural ones. In Carpenter’s film, after finding the welcome messages from Voyager, the Starman heads to Earth – only to discover the hostility of American military men when he is shot down by the U.S. Air Force. But when Starman was released, we were living in a different time. There are hundreds of millions of galaxies in space, and within them millions and millions of stars. If even 1/100 of them contain “life” in any definition, that is still billions of planets with extraterrestrial beings. It’s time we found comfort, rather than fear, in the fact that we are not alone. And even if there aren’t others out there in space, the principle of coexisting peacefully can be applied equally back here on Earth