Comet Elenin Is Of Intelligent Design 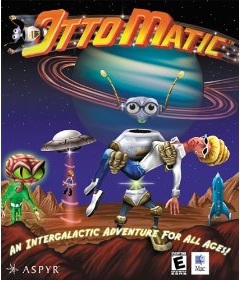 Read This Full Post, There Is New Information Included.

There’s almost no debate anymore… I was becoming a total skeptic of “Elenin” until this latest news. Nothing could produce these numbers and story if not by intelligent design.

Oh, and if all that wasn’t great enough, now NASA must completely think that we’re idiots… Or SEVERELY messing with our heads in a very evil way!

Now a lot of you may not know Otto Matic, but back on September, 11, 2001 the day of the attacks a software company called “Pangea Software” launched their new game called “Otto Matic”.

Here is what the game was about:

“Otto Matic follows the character of Otto Matic Proto in his campaign against the Giant Brain. The story begins on the Bentley Farm on Planet Earth. Here, he has to defeat brain aliens, vegetables, and a tractor. After returning to the escape rocket, he travels to Planet Snoth at the area J-3110. Here he must survive from dangerous slime, ride bubbles, and ride on platforms. Then he must go to the core and defeat a slime machine. Then he travels to Planet Knarr.

To break the ice, he must get a hammer-bot to crack it. Then he uses the saucer on Planet Shebanek to save many humans in POW camps. Then he travels to Planet Xallamarphamorphous (Planet X for short) to defeat the giant brain. After this, many humans have been saved and the story is over.”

This was pulled from Wikipedia: http://en.wikipedia.org/wiki/OttoMatic

And yes, in the game they actually did refer to the planet as Planet X for short. I didn’t think twice about this until I saw that name on the NASA JPL site.

And should I even mention Leonid Elenin?
ELE out of the constellation LEO?
NINe ELEven

This is not a normal comet. Never in the history of man have this many “coincidences” happened at once time for an inbound space object.

Now I know BAUT, and the FIRST thing is “What is your claim?”. Well, I cannot see the future, all I can say is that this is obviously of intelligent design or a staged event. Take your pick.

NASA Directly tells us with the Otto Matic comment

Ladies and gentlemen, Good luck in times ahead.

NASA has viewed this orbit more than ANY other comet in this time span. All others I viewed that were anywhere close to that number were from 5+ years of Data, this is only 202 days.